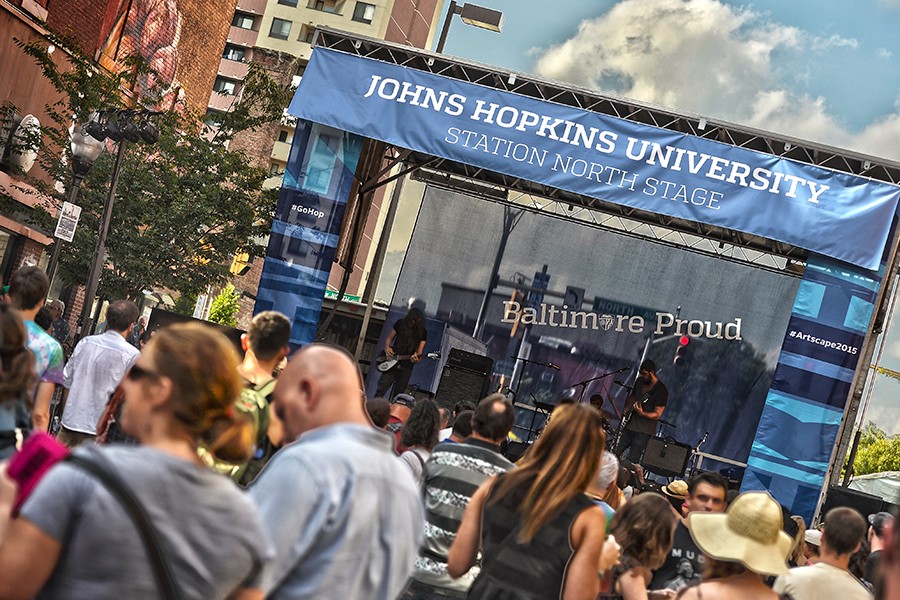 The streets of central Baltimore will come alive this weekend with live music, art exhibitions big and small, and the unmistakable bouquet of festival food-court favorites as Artscape returns for its 34th year.

This afternoon marks the start of the annual event, which typically attracts more than 400,000 visitors from across the city and region and is billed as America's largest free arts festival.

As one of dozens of local sponsors of the festival, Johns Hopkins University welcomes performers from across the region to the Johns Hopkins University Station North Stage at North Charles Street and North Avenue. Local indie acts will perform there all weekend, including winners from the spring's Sound Off Live! music competition. Musicians from Baltimore City Public Schools kick things off this afternoon, and at night, the Station North Stage will become a platform for live DJs at Artscape After Hours.

JHU's Peabody Institute will also be well represented this year. Performers with ties to the conservatory include Integriti Reeves, '10, who's paying tribute to Billie Holiday on the MICA Main Stage on Saturday afternoon; and Michael DeSapio, '08, who will perform a German Baroque violin solo Sunday evening.

The weekend's highlights also include headliners George Clinton and Parliament Funkadelic, the gamers' paradise that is Gamescape, a ferris wheel, and the traditional Art Cars on the Charles Street Bridge.

On Saturday, cast members of The Wire will reunite, to reflect on the death of Freddie Gray and the subsequent unrest in the city. Philip Leaf, senior associate director of the Johns Hopkins Urban Health Institute, has been working with ReWired for Change—a nonprofit founded by former Wire actress Sonja Sohn that has gathered first-person accounts of life before, during, and since the riots from residents of Baltimore—and will be on hand to gauge reactions at the event.

For more information and a full schedule of events, visit Artscape.org.