Neurophysiologists Wiesel, Hubel receive Golden Goose Award for their contributions to our understanding of how brain processes visual information

Neurophysiologists Torsten Wiesel and David Hubel, whose early research involved cats staring at black dots on a screen, are responsible for major progress in our understanding of the brain, for significant advances in the treatment of childhood cataracts, and for informing current research to enable computers to process images more like the human mind. 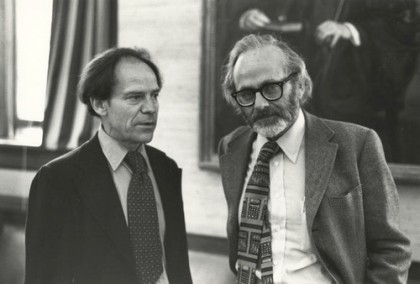 But their extraordinary, federally funded research really took off with a simple, fortuitous accident with the kittens in their lab: somebody pushed a glass slide too far on an overhead projector.

For their decades of research and its humble, serendipitous beginnings, Wiesel and the late Hubel have been selected as the second winners of the 2015 Golden Goose Award, the award's founders announced today. The Golden Goose Award honors researchers whose federally funded work may have seemed odd or obscure when it was first conducted but has resulted in significant benefits to society.

"Thanks to two scientists, federal funding, and a mistake in the lab, we have new discoveries about the human brain and how to improve eyesight in children," said Rep. Jim Cooper (D-TN), whose idea it was to create the Golden Goose Award. "Thank goodness for serendipity."

Cooper first had the idea for the Golden Goose Award when the late Sen. William Proxmire (D-WI) was issuing the Golden Fleece Award to target wasteful federal spending and often targeted peer-reviewed science because it sounded odd. Rep. Cooper believed such an award was needed to counter the false impression that odd-sounding research was not useful.

In the 1950s and '60s, the National Institutes of Health and the Air Force Office of Scientific Research supported the work of Hubel and Wiesel, who were studying how the visual centers in cats and monkeys process simple stimuli. Across a 20-year collaboration, beginning at the Johns Hopkins University School of Medicine and continuing at Harvard Medical School, the pair would go on to make extraordinary discoveries that eventually earned them a Nobel Prize.

The researchers had begun with what was known: light stimulates light-sensing receptor cells in the retina of the eye, and different receptor cells respond to stimuli in different parts of the retina's visual field. But Hubel and Weisel were studying nerve cells, or neurons, in higher-functioning areas of the brain not previously studied, which they found frustratingly unresponsive to their simple stimuli—small spots of light or a black dot on a clear glass slide projected onto a screen. Then, as the cats watched, one of the researchers accidentally moved the glass slide a little too far, bringing its faint edge into view. And suddenly those same neurons began firing like mad!

Over the course of the next several months, Hubel and Wiesel made the first crucial steps forward in our understanding of visual processing. They found that particular neurons in the visual cortexes of cats and monkeys—the areas in their brains responsible for processing visual information—didn't respond to simple points of light, but rather to lines, and in particular, lines and contours with specific orientations. Some neurons responded to horizontal lines, others to vertical, and still others to orientations in between. In addition, they found neurons responding to signals from both eyes, but usually one or the other would dominate.

Over subsequent years, Hubel and Wiesel refined their understanding, mapping the visual centers of their feline and primate subjects with increasing precision. They found the visual cortex consisted of narrow columns of cells organized by eye preference and response to orientation, which they termed "ocular dominance columns" and "orientation columns." Combined they formed an elegantly organized functional map of neurons that could process the complex input arriving from both of the animal's eyes.

As they were adjusting their equipment, a single line moved across the screen at a particular angle—and that caused one cat's neuron to fire. The scientists proceeded to study that single neuron for nine consecutive hours. That work led to a groundbreaking 1959 study that ultimately led to their winning the 1981 Nobel Prize in physiology or medicine, which they shared with CalTech's Roger Sperry. The Nobel committee singled out their research for solving "one of the most well-guarded secrets of the brain: the way by which its cells decode the message which the brain receives from the eye."

Hubel—who died on Sept. 22, 2013, in Lincoln, Mass., of kidney failure at 87—graduated from the McGill University School of Medicine in 1951 and came to Hopkins in 1954 after his internship and residency. He intended to study neurology but suddenly found himself drafted into the U.S. Army as a physician, assigned to the Walter Reed Army Institute of Research, Neuropsychiatry Division. There he did his first scientific research, delving into the spontaneous firing of single cortical cells in sleeping and waking cats.

He returned to Hopkins to continue his research with Vernon B. Mountcastle, already recognized as the father of neuroscience. But Mountcastle's laboratory was undergoing a lengthy renovation, so Hubel accepted an invitation from Stephen W. Kuffler to collaborate with newly arrived, Swedish-born Wiesel at the Wilmer Eye Institute. What began as a six-month research partnership lasted for the next quarter century—and was transplanted to Harvard when Kuffler transferred all nine members of his laboratory (and their families) to Massachusetts in 1959. Soon after moving from Johns Hopkins to Harvard, with their newfound understanding of the brain's organizational structure in hand, Hubel and Wiesel sought to address a perennial question in biology: nature or nurture?

Hubel and Wiesel began by studying the brains of newborn animals with no visual experience. They found that their feline and primate subjects were born with that elegant functional map already in place in their visual cortices. They found neurons that would respond only to oriented stimuli and that responded to stimulation of both eyes. They concluded that nature provides the neural connections necessary for these two basic response properties.

What then is the role of nurture for the normal development of the brain? It was known from medical clinics that children born with cataracts suffer from severe visual deficits even after their opaque lens is removed a few years after birth. With the physical blockage gone, why would this be the case? Hubel and Wiesel had shown that the necessary neural connections should be present at birth.

The researchers addressed this question by studying the impact of raising kittens and monkeys from birth with one eye covered and the other left open. They found that the animal behaved as if it was blind in the previously covered eye, just like in a child after cataract surgery. The cause of this loss of vision turned out to be that neurons in the visual cortex no longer responded to stimulation of the deprived eye but only vigorously to the normal eye. The elegant patterns of ocular dominance the researchers had seen in healthy animals disappeared, with the one dominant eye taking over almost the entire visual cortex. Over a series of experiments, they demonstrated that the brain could literally wire or rewire itself in response to external input (or lack thereof)—a phenomenon known as neuroplasticity—and that this ability seemed to fade with age.

Almost immediately, this realization of the importance of early stimulation to the wiring of the visual cortex translated from the lab to the clinic, where doctors were working to treat children born with cataracts and other eye impairments. With Hubel and Wiesel's new understanding, doctors began treating children as early as possible, with much better outcomes.

Hubel and Wiesel were pioneers of the visual system, exploring the physiology behind visual perception in animals, thereby teaching us much about how our own minds work. This is critical for today's computing technology. For some tasks, like computing and factoring large numbers, silicon has our "wetware" beat handily, but for the complex tasks like visual processing, machines are only beginning to catch up to the human brain. This is no small matter; teaching computers how our minds work is big business. The "machine vision" market is projected to grow to tens of billions of dollars in the next few years. Hubel and Wiesel's work is extremely important to this burgeoning field.

From a slip of the hand while cats watched images on a screen have come better treatments for childhood vision disorders and teaching computers how to process images—a powerful example of how science can advance society in the most unexpected ways.

Earlier this year, the Golden Goose Award founders announced that Walter Mischel, Yuichi Shoda, and Philip Peake would receive the award for their creation and development of the Marshmallow Test. A third set of honorees will be announced in September. The awardees will receive their honors on Sept. 17 at the fourth annual Golden Goose Awards ceremony, which will take place in the Jefferson Building of the Library of Congress, in Washington, DC.