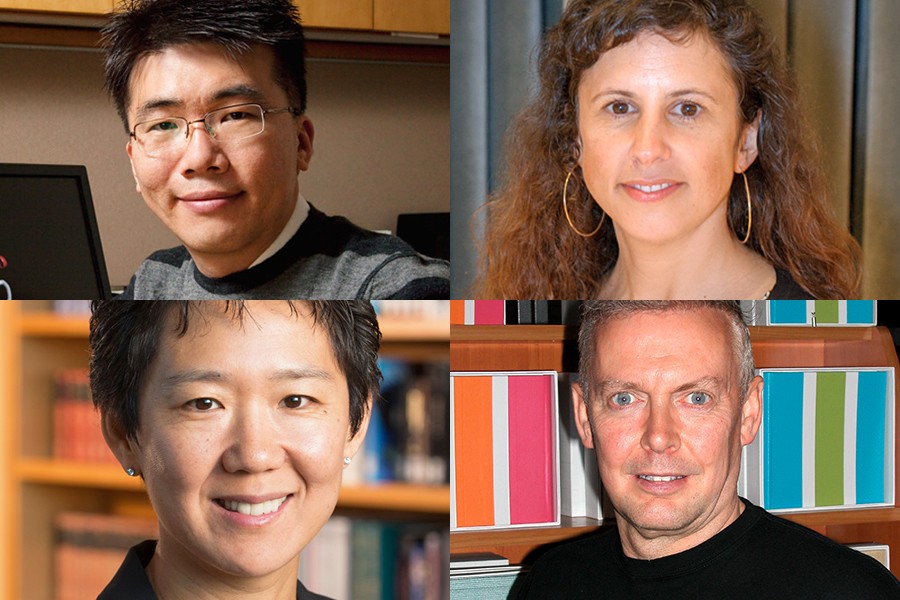 The solutions to the world's biggest challenges do not lie in any one discipline—they lie in the connections among big thinkers and bridge-builders. The four individuals appointed this week as Bloomberg Distinguished Professors represent this new generation of cross-specialty collaborators who pull insights from across the spectrum of human knowledge.

The Bloomberg Distinguished Professorships are the centerpiece of the university's focus on strengthening its "capacity for faculty-led interdisciplinary collaboration" as outlined in President Ronald J. Daniels' Ten by Twenty vision plan. A total of 50 endowed professorships, to be appointed over five years, are supported by a gift to the university by Johns Hopkins alumnus and former New York City Mayor Michael Bloomberg.

Four Bloomberg Professors were announced in March, and now the addition of Jessica Fanzo, Taekjip Ha, Rong Li, and Alan Yuille brings to 14 the total of world-class faculty members dedicated to interdisciplinary scholarship.

"Our newest Bloomberg Distinguished Professors embody the promise of Mike Bloomberg's visionary gift," Daniels says. "These distinguished faculty join a cohort of scholars whose interdisciplinary approach to scholarship and research will strengthen meaningful collaboration across our divisions and advance solutions to fundamental challenges facing our society. We are delighted they will call Johns Hopkins their academic home."

Jessica Fanzo, who will be the first Bloomberg Distinguished Associate Professor, comes to Johns Hopkins to help lead the university's collaborative efforts in ethics, global food, and agricultural policy. In low-income and post-conflict countries worldwide, Fanzo has worked to improve food security and nutrition for women and children and to ensure they have high-quality food and better diets.

"All of my degrees are in nutrition, so I always had an interest in food systems," says Fanzo. She was a postdoctoral lab scientist for four years but found she wanted to work more directly with people. "I switched gears and focused much more on global health. My entry into international work was HIV/AIDS—that was the first time I went to rural sub-Saharan Africa." After a few years, her interests converged and she began to study public health nutrition, focusing on the interdependence of agriculture, nutrition, and food security.

Since 2007, Fanzo has served as nutrition director of Columbia University's Earth Institute. She also has provided technical and policy counsel on international development projects and programs as the senior adviser for nutrition policy at Columbia's Center on Globalization and Sustainable Development, and at the United Nations World Food Programme, World Health Organization, UNICEF, and World Bank.

For more than a year, she has been collaborating with Hopkins through the Global Food Ethics Initiative at the Berman Institute of Bioethics.

"At Columbia, I was one of the few on campus who focused on international nutrition. At Hopkins, where there is such a strong international focus, there is an opportunity to build a food security and food systems program between Berman and the School of Advanced International Studies," says Fanzo, whose research lies within the university's Global Health Institute signature initiative.

She says she is especially looking forward to creating new courses to get students interested in issues of food security, equity, and ethical issues around global food systems. "For example, how do we ensure people in low-income countries have enough animal-source food, and that people in high-income countries don't eat too much? How can we balance demand for these foods with planetary health? There are a lot of moral and ethical issues to understand," she says.

Taekjip "TJ" Ha is a world leader in single-molecule biology and intracellular imaging. "We use light to study nature's nano-machinations," Ha says. "I'm a physicist by training, and I develop really fancy instruments that measure things that couldn't be measured before, to answer some of the oldest and most perplexing questions in biology."

The Howard Hughes Medical Institute investigator is known for developing sophisticated physical techniques to manipulate and visualize the movements of single molecules in order to understand basic biological processes. In particular, he focuses on DNA transactions such as replication, recombination, and chromatin assembly, which may eventually lead to answers in addressing cancer and infectious diseases.

"You have to use sophisticated computational and physical mathematical models to get info out of sometimes noisy data," explains Ha, who studied physics as an undergraduate in South Korea and discovered an interest in biophysics later in his career. "Biologists can't do that readily, so we have a niche to explore, applying physics technology to biology."

With appointments across the schools of Medicine, Arts and Sciences, and Engineering, Ha will teach an interdisciplinary biophysics course for undergraduate students and conduct research in three labs on two Johns Hopkins campuses. "I'll go back and forth, and I find it very exciting to be delocalized that way. Students and researchers do magical things when they can collaborate next to each other," he says.

He joins Hopkins from the University of Illinois at Urbana-Champaign, where he was the Gutgsell Professor of Physics. His wife, Sua Myong, studies the role of DNA recombination and repair in cancer development and will be joining the Krieger School's Biophysics Department.

Cell biologist Rong Li strives to understand how eukaryotic cells perform dynamic processes in order to carry out their specialized functions, with applications in development and cancer. In other words, "we try to figure out how a cell divides, moves, and adapts to its environment. That's really important for understanding devastating diseases such as cancer or aging-related degeneration diseases," she says.

Growing up in post–Cultural Revolution China, Li was encouraged to study science and technology. "I was also interested in fine arts and writing, but I knew I was almost destined to go into science," says Li, who became the first high school graduate in the People's Republic of China, in 1984, to be admitted to Yale. She went on to the University of California, San Francisco, for her PhD, did postdoctoral training at Berkeley, and held a faculty position at Harvard Medical School before moving to the Stowers Institute for Medical Research as an investigator, with an affiliated professorship in the nearby University of Kansas Medical Center.

There, for the past 10 years, Li has taken interdisciplinary approaches to solving biomolecular problems. "We have tremendous funding that allows us to really explore new approaches and questions, but it's a small institute without the wide areas of research expertise that a large campus like Hopkins can offer. That's what attracts me to come here. For me, this is a much bigger playground," she says.

At Hopkins, Li will direct the Institute for Basic Biomedical Sciences' Center for Cell Dynamics, which she hopes "to build as a center or platform for fostering and pursuing interdisciplinary research to solve important and challenging questions in biology and medicine." Her appointment will span the schools of Medicine and Engineering, with her research supporting the Individualized Health signature initiative.

"I feel there's a sense of freedom at Hopkins," Li says. "I have the opportunity to be creative to try to figure out what's the most effective model to do this work. As someone who was never trained at Hopkins, there's a lot for me to learn about this environment. That is challenging and exciting."

"People think that seeing is easy because everybody can open their eyes and understand the world directly. When people started trying to create artificial intelligence, they thought vision was so easy that an MIT professor asked his student to solve it over the summer holidays," Yuille says. Twenty years later, a computer program, Deep Blue, beat world chess champion Garry Kasparov, but computer vision systems were still unable to detect faces in images.

"Getting computers to understand images is really difficult," says Yuille, whose research aims to develop mathematical models of vision and cognition that allow us to build computers that, when given images or videos, can reconstruct the three-dimensional structure of a scene.

His work will reach across the computer vision, vision science, and neuroscience communities at Johns Hopkins, particularly in the schools of Arts and Sciences and Engineering. "I'm looking forward to working across departmental boundaries to build a strong team of people who complement each other and work on the computer side and on the biology side of what I study," says Yuille, whose research falls within the Science of Learning Institute signature initiative.

Yuille comes to Hopkins from a full-time position in the Department of Statistics at UCLA, where he holds courtesy appointments in Psychology, Computer Science, and Psychiatry and serves as the director of the UCLA Center for Cognition, Vision, and Learning.