By Phil Sneiderman and Lisa Ercolano

You can whack it with a hammer, attack it with a drill, even stab it with a screwdriver. But try as you might, you won't be able to tamper with a high-tech pill dispenser designed by mechanical engineering students at Johns Hopkins University's Whiting School of Engineering. 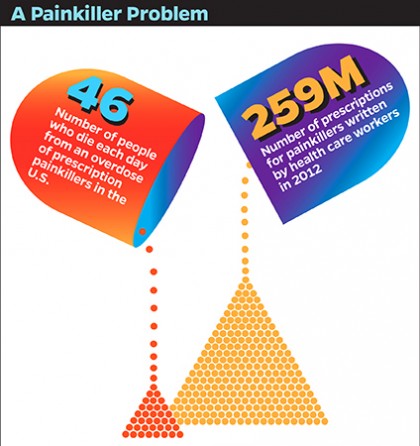 Which is exactly the point.

The U.S. Centers for Disease Control and Prevention has estimated that drug overdoses kill more than 44,000 Americans annually, including more than 16,000 deaths from prescription drugs. Federal officials also say that at least one in 20 Americans ingests drugs prescribed for someone else. Concerned about these alarming statistics, experts at the Johns Hopkins Bloomberg School of Public Health's Center for Injury Research and Policy challenged a team of Johns Hopkins senior mechanical engineers to design and build an anti-theft and tamper-resistant pill dispenser.

"We needed this personal pill 'safe' to have tamper resistance, personal identification capabilities, and a locking mechanism that allows only a pharmacist to load the device with pills," said Kavi Bhalla, assistant professor at the university's Bloomberg School of Public Health and one of the team's mentors for the project.

Classmates Megan Carney, Joseph Hajj, Joseph Heaney, and Welles Sakmar—each 22 years old and recently graduated from Johns Hopkins—spent their senior year researching, designing, building, and testing a device that met those specifications. The team unveiled its high-tech creation at the Department of Mechanical Engineering's Senior Design Day, an event held annually at the end of the spring semester.

Weighing in at 2.57 pounds and standing 9.25 inches tall, the electronic prototype is equipped with a fingerprint sensor to ensure that drugs are dispensed only to the prescribed patient at the prescribed intervals and in the prescribed dosage. The cylindrical device is constructed of the same kind of super-tough steel alloy used in aircraft landing gear and is equipped with the same kind of fingerprint sensor used in some iPhones to ensure that the medication is dispensed only to the correct patient.

"The device starts to work when the patient scans in his or her fingerprint. This rotates a disc, which picks up a pill from a loaded cartridge and empties it into the exit channel. The pill falls down the channel and lands on a platform where the patient can see that the pill has been dispensed. The patient then tilts the device and catches the pill in their hand," Carney explains.

According to Heaney, the most challenging part of the whole project was "getting the electronic circuit that powers the fingerprint detector to work right."

The device holds 60 tablets (a standard month's dose) of OxyContin, a potent narcotic pain reliever that was selected for the project because it tops the list of the most commonly abused prescription drugs. (Tylenol tablets served as a stand-in for its more potent cousin during device development.)

"We also went and talked to the pharmacist at the Rite-Aid [on the Johns Hopkins Homewood campus] and got his feedback on our design and approach," Sakmar says. "We wanted to make sure not only that it was easy for the patient to use but also simple for the pharmacist to unlock, load with pills, and then relock."

Once the team members were satisfied with the input from the pharmacist, they then challenged a student to try to break into it.

"He took a hammer and other tools to it, from a hacksaw to a drill, and he broke at least one drill bit trying to get it open," Carney says.

Andrea Gielen, director of the Johns Hopkins Center for Injury Research and Policy at the Bloomberg School of Public Health and one of the team's mentors, said she and Bhalla were so impressed with the team's design that they have a proposal pending with the National Institutes of Health to further develop and test prototypes of the team's device as part of a larger consumer product safety initiative.

"The team did a terrific job in applying their skills to help reduce the number of poisoning deaths in this country," Gielen says. "We hope this work will lead to having safer pill dispensers on the market soon. Engineering has always had a huge role to play in preventing injuries, so we are very grateful for this important partnership"