'In the Wake' exhibition, by Woodrow Wilson Fellow Justin Falcone, on display at MSE Library through mid-March 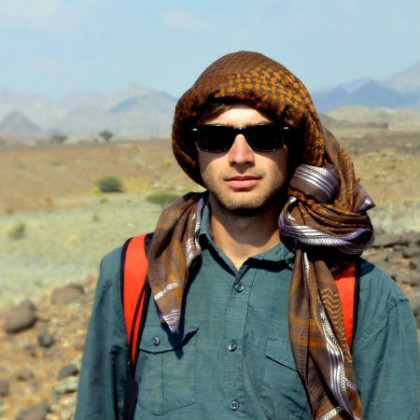 Falcone says he is dedicated to furthering an understanding of the past and present implications of environmental change and has long been interested in the advocacy applications of photography and geospatial technologies. He sailed between Tahiti, the Marquesas, Kiribati, and Hawaii in the spring of 2013 and investigated the sociocultural implications of water scarcity on island communities as part of his research for JHU's Woodrow Wilson Undergraduate Research Fellowship Program. The program awards $10,000 in funding each year to select freshmen in the School of Arts and Sciences to pursue a four-year research project of the student's design.

The exhibition, which will be on display through mid-March, challenges traditional conceptions of the South Pacific as paradise. Instead, the photos depict the dynamic reality of living by the ocean as sea levels rise as a result of environmental change.

"There is a certain irony in statistically representing environmental change, in sanitizing for public consumption places that are left off many maps—and will be left off every map should sea levels continue to rise as projected," Falcone says.

Indeed, Pahoa, Hawaii, where he worked on an organic farm for several months, has already been dramatically altered by the Kilauea volcano.

"Living in the shadow of other volcanoes, Etna and Vesuvius, I've found images that capture the poetics of volcanic destruction powerful in distilling a sense of the quite literally explosive relationship humans can have with the environment," he adds.

Falcone's exhibition references French post-impressionist Paul Gauguin, whose paintings depict indigenous cultures in the South Pacific in the late 19th century. Although the exhibition title refers to the rising seas, it also plays on the troublesome anthropological trope of the "vanishing native." Recognizing the history of the South Pacific to be one of movement and migration, Falcone attempts to re-characterize the South Pacific in the wake of Gauguin's iconic paintings, which depict the region as an exotic tourist destination.

Falcone took a particular interest in the island nation of Kiribati during his research. Many geologists and environmental scientists estimate that by the year 2050 the island nation will be completely submerged.

Falcone's project was exemplary in its "study of those communities particularly at risk due to climate change and rising sea levels," says Ami Cox, administrator of the Woodrow Wilson Undergraduate Research Fellowship Program.

"'In the Wake' is a powerful expression of Justin's journey and allows viewers to experience the beauty, the heartbreak, and the hope he has discovered along the way."

When Falcone returned home from his expedition, he launched Project Kiribati, the first international initiative designed to support a sustainable clean water infrastructure for the low-lying island nation. The group worked to supply medical equipment, vitamins, and water purification tablets to individuals living in Kiribati. The effort is an offshoot of the Alliance for Clean Water (ACWa), a Johns Hopkins student group founded by Falcone that is dedicated to the protection of clean water in natural and urban environments.

Falcone, who is currently studying environmental archaeology and minoring in global environmental change, is also the recipient of a 2014 Harry S. Truman Scholarship, which awards grant funding for future graduate study to 59 nominees nationally. He was awarded a National Science Foundation grant to utilize GIS mapping and satellite imagery analysis in the study of coastal environmental change at the USC Wrigley Institute of Environmental Studies on Catalina Island.

This past winter, he joined Johns Hopkins archaeologist Michael Harrower on a NASA-funded project in Oman investigating the water histories of southern Arabia, and has also investigated water scarcity in the Mediterranean region. This research, advised by Harrower, forms his departmental honors thesis. In the Wake is a component of his thesis in the Humanities Center Honors Program. He is also developing a patented environmental technology with the Social Innovation Lab. 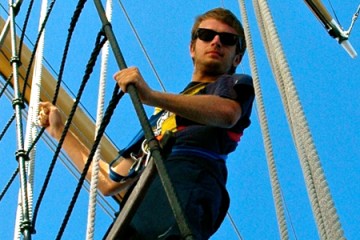