Pulitzer Prize-winning poet Mark Strand, who once taught at JHU, dies at 80 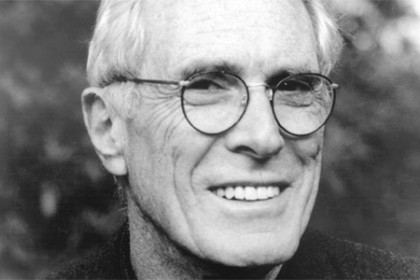 The first of Strand's many volumes of poetry, Sleeping With One Eye Open, was published in 1964 and contained the much anthologized poem "Keeping Things Whole," which begins: "In a field / I am the absence / of field. / This is / always the case. / Wherever I am / I am what is missing."

From 1994 until 1998, he was the Elliot Coleman Professor of Poetry at Johns Hopkins.

"His poetry is bone dry," said Jean McGarry, co-chair of the Writing Seminars program, "but somehow beautiful and dreamy, too."

A later volume, Blizzard of One, won the Pulitzer Prize in 1999. Strand garnered a National Book Award nomination for his last book, Collected Poems, published earlier this year. Though best known as a poet, Strand also published non-fiction prose as well as stories for children. He was also involved in visual arts and created collages composed of handmade paper.

Strand was born on Prince Edward Island, Canada, in 1934. He earned a BA from Antioch College in 1957, a BFA from Yale in 1959, and an MFA from the Iowa Writers' Workshop in 1962. His honors include the Bollingen Prize for Poetry, a National Institute of Arts and Letter Award, and a MacArthur Foundation fellowship—the so-called genius grant. Strand was appointed Poet Laureate of the United States in 1990.

For many years Strand taught at universities, including the University of Utah, Columbia University, and Johns Hopkins.

"In my 30 years teaching at Johns Hopkins, there was no other persona like Mark Strand," McGarry said. "He brought with him a vast, adventurous, and quirky reading, and shared the most obscure literary works with his colleagues. He was an artist, a poet, an intellectual, with absolutely no pretensions about any of these. He had a wild sense of humor, and was constantly at work—writing, reading, producing monotypes of isolated portions of coastal Ireland—although he acted as if he had nothing to do. The Italians have a word for this kind of grace: sprezzatura."