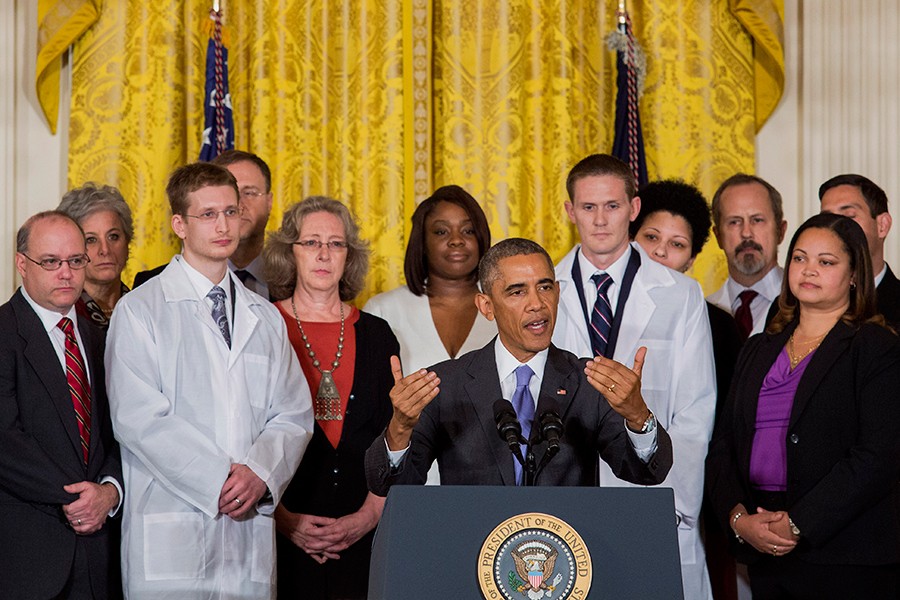 Image caption: President Barack Obama praises U.S. health care workers fighting on the front lines of the Ebola epidemic during a news conference in the East Room of the White House on Wednesday. Four Johns Hopkins faculty members—Trish Perl, David Peters, Susan Krenn, and Tom Kirsch—were among the 12 medical workers who stood behind Obama on the podium.

Four Ebola experts from Johns Hopkins University were among a dozen U.S. medical workers who stood with President Barack Obama on Wednesday afternoon at a news conference in the East Room of the White House during which the president praised health care workers serving on the front lines of the Ebola outbreak in West Africa, calling them "heroes" deserving of praise rather than stigmatization.

"When disease or disaster strikes anywhere in the world, the world calls us," Obama said. "And the reason they call us is because of the men and women like the ones who are here today. They respond with skill and professionalism and courage and dedication. And it's because of the determination and skill and dedication and patriotism of folks like this that I'm confident we will contain and ultimately snuff out this outbreak of Ebola—because that's what we do."

The medical workers who stood with Obama have either recently returned from West Africa or will head there soon. The group, which met briefly with the president before he delivered his public remarks, included Trish Perl, professor of medicine and senior epidemiologist at Johns Hopkins Medicine; David Peters, chair of the Department of International Health at the Johns Hopkins Bloomberg School of Public Health; Susan Krenn, director of the Johns Hopkins Center for Communication Programs; and Tom Kirsch, director of the Center for Refugee and Disaster Response at the School of Public Health.

Obama was introduced by Kent Brantly, a doctor for a Christian relief group who became infected with Ebola in Liberia this summer but recovered after being evacuated and treated at Emory University Hospital in Atlanta.

"Because of the work that's being done by folks like this and by folks who are right now, as we speak, in the three affected countries, we're already seeing a difference," Obama said of the U.S. health care workers in West Africa.

"They deserve our gratitude, and they deserve to be treated with dignity and with respect."

The president's remarks came amid an ongoing national debate about how to balance public health and fears against the rights of health care workers and others returning to the U.S. from West Africa. New Jersey and New York have enacted policies that go beyond CDC guidance by requiring all health care workers who have had contact with Ebola patients in West Africa to be quarantined for 21 days. Earlier this week, Defense Secretary Chuck Hagel announced a similar policy for members of the U.S. military returning from the affected countries—Liberia, Sierra Leone, and Guinea.

On Monday, Michael J. Klag, dean of the School of Public Health, wrote a letter to N.J. Gov. Chris Christie criticizing that state's quarantine policy and its application to nurse Kaci Hickox, a Johns Hopkins graduate who recently returned from Sierra Leone and was quarantined for three days in a tent outside a New Jersey hospital before being allowed to return home to Maine. Klag said the New Jersey policy "increases paranoia without materially protecting health."

On Wednesday, Obama echoed that sentiment, cautioning against "hysteria and misinformation."

"We've got hundreds of Americans from across the country—nurses, doctors, public health workers, soldiers, engineers, mechanics—who are putting themselves on the front lines of this fight," Obama said. "They represent citizenship and patriotism and public service at its best. They make huge sacrifices to protect this country that we love. And when they come home, they deserve to be treated properly. They deserve to be treated like the heroes that they are."

Before the news conference, the medical workers spoke with Obama about conditions on the ground in West Africa and what they believe the U.S. government should be doing to address the spread of the disease there. The meeting was also attended by Sylvia Burwell, secretary of Health and Human Services; Raj Shah, administrator of the United States Agency for International Development; and Anthony Fauci, director of the National Institute of Allergy and Infectious Diseases.

"It is truly inspiring to have the president's leadership so prominent—and public—on this critical public health issue," Krenn said. "I was particularly encouraged to hear them speak about needs beyond the immediate Ebola emergency, the critical importance of social mobilization and behavior change in addressing these challenges, and the need for data to support the program response. I left highly impressed with the administration's leadership, eagerness to engage and support partners on the ground, and commitment to being there through the immediate crisis and beyond." 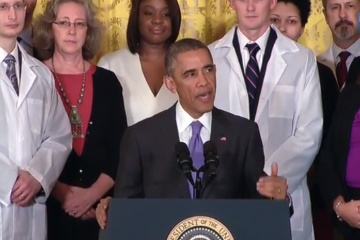 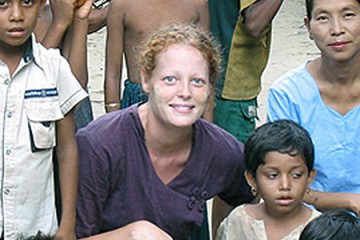