Michael J. Klag, dean of the Johns Hopkins University Bloomberg School of Public Health, sent a letter to New Jersey Gov. Chris Christie this morning objecting to the policy that led to the quarantine of a health care worker who recently returned from West Africa. 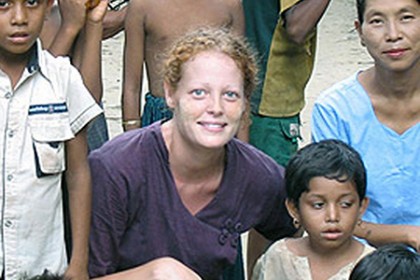 Image caption: Kaci Hickox, who received a joint master's degree from the Johns Hopkins schools of Public Health and Nursing, was quarantined in New Jersey on Friday after returning from Sierra Leone.

Kaci Hickox, a nurse who received a joint master's degree from the Johns Hopkins schools of Public Health and Nursing in 2011, has been detained in isolation in a tent outside a New Jersey hospital for three days since returning Friday from Sierra Leone, where she spent the past month with Doctors Without Borders caring for Ebola patients. Hickox, 33, was the first person held under a new New Jersey policy mandating quarantine for all health care workers returning from West Africa, a policy that has drawn sharp criticism from public health officials and from Hickox herself.

Hickox has no symptoms and has tested negative for Ebola virus, according to media reports. This morning, Christie announced that Hickox could return to her home in Maine, where local health officials will determine how to monitor her for signs of the virus over the next few weeks.

"I am writing to indicate in the strongest possible terms my objection to your policy of a 21-day quarantine for health care workers traveling from West Africa to New Jersey and, especially, its application to our graduate Kaci Hickox," Klag wrote in his letter to Christie this morning, adding that Hickox "poses no risk to her fellow citizens."

"While I applaud your concern for the health of the citizens of New Jersey and recognize your responsibility to protect their health, I do not think that this policy does so," he added. "Instead, it increases paranoia without materially protecting health."

In a letter published by The Dallas Morning News, Hickox described her treatment upon arriving at Newark Liberty International Airport from West Africa as confusing and troubling.

"No one seemed to be in charge," she wrote. "No one would tell me what was going on or what would happen to me."

In a message released this afternoon, Patricia M. Davidson, dean of the Johns Hopkins School of Nursing, called Hickox a "hero," adding "fear has a way of constraining our capacity for respect and empathy. This should not be an excuse for disrespectful attitudes, procedures or policies."