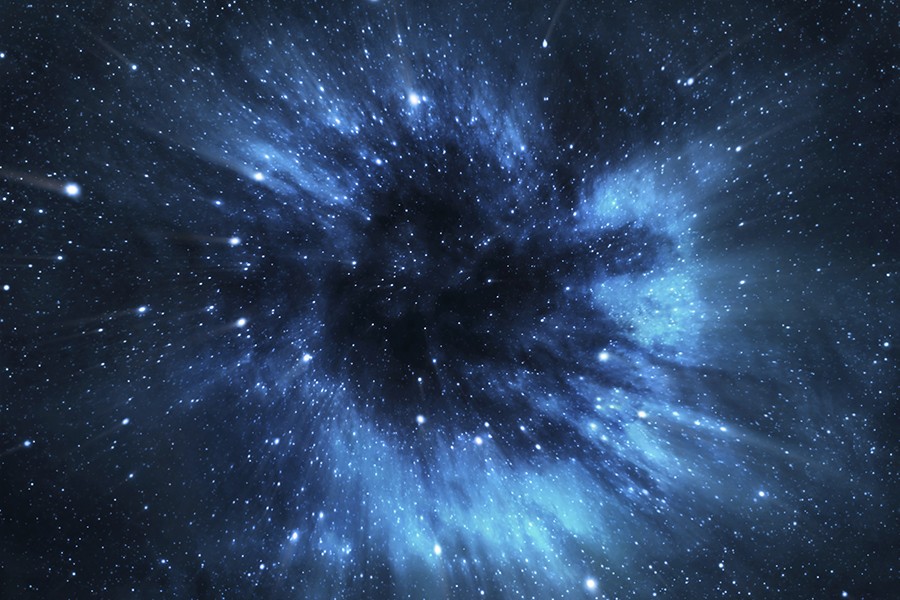 Massive black holes spewing radio-frequency-emitting particles at near-light speed can block the formation of new stars in aging galaxies, a study has found.

The research provides crucial new evidence that it is these jets of "radio-frequency feedback" streaming from mature galaxies' central black holes that prevent hot free gas from cooling and collapsing into baby stars.

"When you look into the past history of the universe, you see these galaxies building stars," said Tobias Marriage, assistant professor of physics and astronomy at Johns Hopkins and co-lead author of the study. "At some point, they stop forming stars and the question is: Why? Basically, these active black holes give a reason for why stars stop forming in the universe."

The findings have been published in the journal Monthly Notices of the Royal Astronomical Society.

The discoveries were made possible by adapting a well-known research technique. Johns Hopkins postdoctoral fellow Megan Gralla found that the Sunyaev–Zel'dovich effect signature—typically used to study large galaxy clusters—can also be used to learn a great deal about smaller formations. The SZ effect occurs when high-energy electrons in hot gas interact with faint light in the cosmic microwave background, light left over from earliest times when the universe was a thousand times hotter and a billion times denser than today.

"The SZ is usually used to study clusters of hundreds of galaxies, but the galaxies we're looking for are much smaller and have just a companion or two," Gralla said.

"I was stunned when I saw this paper, because I've never thought that detecting the SZ effect from active galactic nuclei was possible," said Eiichiro Komatsu, director of the Max Planck Institute for Astrophysics in Germany and an expert in the field who was not involved in the research. "I was wrong. … It makes those of us who work on the SZ effect from galaxy clusters feel old; research on the SZ effect has entered a new era."

In space, hot gas drawn into a galaxy can cool and condense, forming stars. Some gas also funnels down into the galaxy's black hole, which grows together with the stellar population. This cycle can repeat continuously; more gas is pulled in to cool and condense, more stars begin to shine and the central black hole grows more massive.

But in nearly all mature galaxies—the big galaxies called "elliptical" because of their shape—that gas doesn't cool any more. "If gas is kept hot, it can't collapse," Marriage said. When that happens: No new stars.

Marriage, Gralla, and their collaborators found that the elliptical galaxies with radio-frequency feedback—relativistic radio-frequency-emitting particles shooting from the massive central black holes at their center at close to the speed of light—all contain hot gas and a dearth of infant stars. That provides crucial evidence for their hypothesis that this radio-frequency feedback is the "off switch" for star-making in mature galaxies.

It's still not clear why black holes in mature elliptical galaxies begin to emit radio-frequency feedback, Marriage said: "The exact mechanism behind this is not fully understood and there are still debates."

Komatsu said that the new Johns Hopkins-led study, combined with others detecting SZ signals from more ordinary galaxies, "pose new challenges to the theory of galaxy formation, as there were hardly any data which told us how much hot gas there is around galaxies."