Video, digital have 'completely changed what we do,' he says

Sitting beside Carey's Dean Bernard T. Ferrari at the school's Harbor East campus, Zucker covered a variety of topics during his Sept. 11 visit, including his professional experiences as someone who has spent his entire career in one industry and the transformation of the way multimedia news is collected and conveyed in the age of instant video uploads and microblogging.

As chief of 23 branded entities, including CNN International, CNN Digital, and HLN, Zucker's decisions play out live, globally, on a 24/7 basis. He learned the ropes of television and media during decades of major change in technology and taste.

The period between his role as a researcher at NBC during the 1988 Seoul Olympics and his appointment to President and Chief Executive Officer of NBC Universal included a 10-year stint as executive producer of Today, a position he took at age 26. He said he was cocky in those early days of leadership, but like many top executives who built their careers by rising through the corporate ranks, he learned quickly and "got [his] MBA on the job."

After decades spent working in one building, a change of ownership at NBC led him to make the move to his current post. Zucker, 49, said he was sad to leave 30 Rockefeller Center, but glad to take the next step in early 2013. "I love television and I love news," he said, "and if you love those two things, it often moves you to CNN."

Zucker, who has been running CNN for about two years, shared his thoughts on what television news means in this day and age.

"There is nothing said anymore that isn't disseminated in some way," he said of the ubiquity of news collection and sharing. "I've been thinking a lot this week about how video has completely changed what we do."

At the time of his visit, the stories dominating the national and global news cycles ranged from sports scandals to international terrorism. "Video," Zucker noted, "has played a tremendous role in every one."

In many cases, the footage that makes the news these days is not collected by expensive network cameras but by people using their mobile phones. That speed of publication poses a challenge for news organizations such as CNN, and Zucker said he has emphasized to his employees: Get each point of a story right rather than getting it on the air before competing networks or websites.

"I don't care if we're first on something," he said, "but it's far more important for us to be right."

"Everybody has an opinion about CNN," Zucker said. Occasionally those views are expressed directly through social networks, through satire, or on CNN's own air when interviews get heated or when web comments are read live. He said he has an in-house focus group of his four children, who provide him with honest, valuable insights on a daily basis. Their world is digital, and they are the future audience that companies such as CNN strive to attract.

"Digital is what I spend most of my time thinking about in terms of where the business is going," Zucker said.

As a senior executive, Zucker said, he has to look at CNN's shifting online presence and revenue flows with predictive insight, and not as an issue peripheral to the TV business: "It will matter big-time when full monetization of digital comes. My job is leading the organization through that change."

"Sometimes units of the organization will shut down, and new ones will be created," he added, also noting his duty to articulate why segments of the CNN Worldwide workforce sometimes are cut, along with business operations. "I cannot shrink from that responsibility." 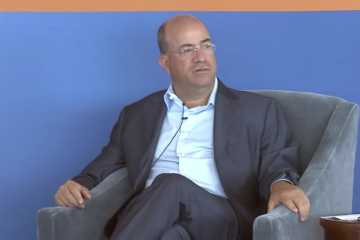