Messenger gets closer to Mercury than ever

Polar ice deposits, unusual geological features, and the planet's gravity and magnetic fields to be explored

On July 25, NASA's Messenger probe moved closer to Mercury than any spacecraft has before, dropping to an altitude at closest approach of only 100 kilometers (62 miles) above the planet's surface.

"The science team is implementing a remarkable campaign that takes full advantage of MESSENGER's orbital geometry, and the spacecraft continues to execute its command sequences flawlessly as the 14th Mercury year of the orbit phase comes to a close," said MESSENGER mission operations manager Andy Calloway of the Johns Hopkins University Applied Physics Laboratory.

The latest observational campaign includes closer looks at polar ice deposits, unusual geological features, and the planet's gravity and magnetic fields "in ways that have never been possible," said APL's Ralph McNutt, MESSENGER's project scientist. "This dip in altitude is allowing us to see Mercury up close and personal for the first time."

MESSENGER (MErcury Surface, Space ENvironment, GEochemistry, and Ranging) is a NASA-sponsored scientific investigation of the planet Mercury and the first space mission designed to orbit the planet closest to the Sun. The MESSENGER spacecraft was launched on August 3, 2004, and entered orbit about Mercury on March 18, 2011, to begin its primary mission – a yearlong study of its target planet.

MESSENGER's first extended mission began on March 18, 2012, and ended one year later. MESSENGER is now in a second extended mission, which is scheduled to conclude in March 2015. Sean C. Solomon, the Director of Columbia University's Lamont-Doherty Earth Observatory, leads the mission as Principal Investigator. The Johns Hopkins University Applied Physics Laboratory built and operates the MESSENGER spacecraft and manages this Discovery-class mission for NASA. 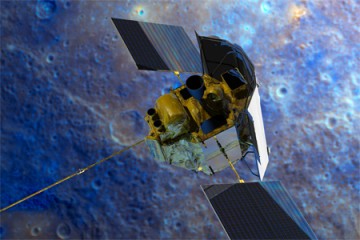