Astronaut alum shows us what Johns Hopkins looks like from space

Reid Wiseman has been aboard International Space Station since late May

What does Johns Hopkins University look like from space?

Thanks to astronaut Reid Wiseman, a Baltimore native who earned his master's degree from the Whiting School's Engineering for Professionals program in 2006, we have an idea.

Wiseman tweeted the photo of Baltimore shown below (and a shoutout to the first-place Orioles) yesterday, and the footprint of the university's Homewood campus (well, most of it) is clearly discernible along the top edge of the image, just east of the much larger green space of Druid Hill Park. JHU's East Baltimore campus can be made out, too, and if you really squint—and are particularly skilled in Charm City geography—you can locate the university's School of Education, Peabody Institute, and Carey Business School.

Wiseman embarked on his first spaceflight in late May and has been aboard the International Space Station since then. He has accumulated nearly 150,000 Twitter followers with his frequent and fascinating Earth-as-seen-from-orbit photos and short videos, including a recent series of shots of the developing Hurricane Arthur. 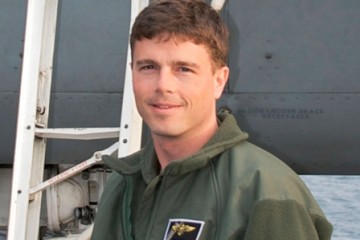 Published May 28, 2014
Reid Wiseman, who earned his master's degree from the Engineering for Professionals program, scheduled to lift off from Kazakhstan today