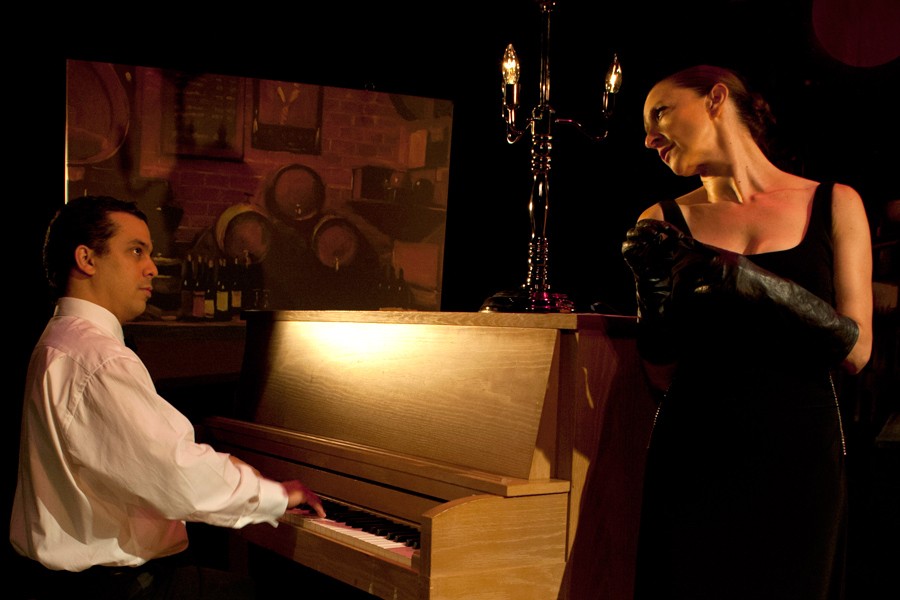 A man invites a woman to meet him at a cabaret at the beginning of Ultima Partida (The Final Draw), the Spanish-language play written and directed by Monica López-González, a Johns Hopkins alumna and Peabody Institute adjunct faculty member. The play debuted Thursday and ran through Sunday at Baltimore's Theatre Project. And from the moment the woman (Luz Nicolás) arrives at the cabaret it's clear she's exasperated with him (Ignacio García-Bustelo). She greets him sweetly, and then almost immediately launches into a series of questions that circle those perennial concerns of coupledom: What do they mean to each other? What is their relationship? What does the future hold? Is there a future? She stands across the room from him, dressed in a seductive sleeveless black dress, but her posture is defiantly antagonistic. Shoulders back, back rigidly straight, slightly leaning forward as if prepared to charge at any moment. He's doing his best to answer the questions she throws at him before trying another approach. He smiles, and jauntily saunters over thinking maybe romantic closeness is a good substitute for the answers she wants that he doesn't want to think about. 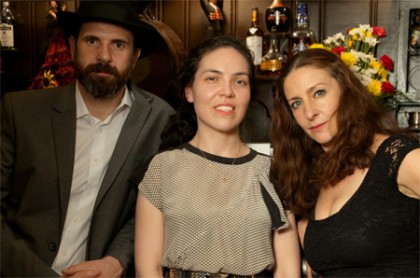 At this point, the cabaret's pianist—Peabody graduate César Orozco, who was recently awarded the 2014 DownBeat student music award for original composition—casually switches gears from the jazzy, tango-inspired tune he had been playing during their conversation to a bawdy, bluesy melody, something that wouldn't be out of place in a New Orleans salon in the 1910s. And with that on-the-fly musical segue, the entire tone of the scene shifts.

This musical interaction with and emotional response to the script is exactly the sort of improvisation López-González envisioned for her debut play. A still photographer, filmmaker, musician, and cognitive science researcher, López-González had experimented with combining live jazz improv and film before. With Ultima Partida, she sought to try two different experiments at once: to allow a jazz musician to control tone and mood in the way conventional theater uses lighting design, and to craft a genuine, solitary conversation that has the narrative arcs of a symphony.

"I had this crazy idea that I wanted a full-on conversation with music," López-González says during a late May interview. "Music is felt to be more universal because of its non-explicit nature as opposed to language. If we say the word 'happy,' it can mean so many different things to different people. It's amazing how a single word that has a clear semantic meaning is also really not so clear because of so many societal, cultural, and political implications associated with it. Music can express something so obvious yet universal. It has more nuances, and I wanted to see if I could translate emotions [in a theatrical setting] that can be indescribable."

Those emotions she's talking about run the gamut from hope to despair, loneliness to trust, anticipation to disgust, jealousy to lust—those ordinary feelings that crop up in any relationship. López-González has packed them all into a single conversation between a man and a woman, both unnamed. From the start it's clear they've had an intense physical relationship, but what comes next about—or, perhaps more accurately, they haven't talked about it with each other and doing so isn't easy. Remember that scene in Casablanca when Isla returns to Rick's Café Américain to explain the whole Paris fiasco and is summarily dismissed? Think of Ultima Partida as the emotional roller coaster that might've unspooled had they hashed it out in one back-and-forth conversation—with Sam providing the soundtrack.

"I'm really upset that contemporary film and theater have lost the conversation," López-González says. "It's all action. Conversation is a minimal part of it. I wanted to see something that I miss from the movies of the '60s and '70s, full-on conversations, like in [Ingmar] Bergman's movies or the Husbands or Shadows of [John] Cassavetes. I wanted two people sitting and talking about their relationship, and to try to dissect [as a writer] what happens in those moments that we never see on film onstage anymore."

By writing the script in Spanish (English supertitles run during the production for English speakers to follow along), López-González has created lines of dialogue that move with their own melodies, Spanish homophones and rhymes creating internal word-play rhythms and musicality. And in Nicolás, García-Bustelo, and Orozco she has three native speakers who at times behave with the instinctual brio of a jazz trio. As with any stage play, the actors turn text into flesh, banging out the script to know where they'll be putting emphasis, recognizing where they'll be onstage, and providing emphasis or understatement with body language. Unlike most stage productions, the soundtrack is responding to their words, and the performers, in turn, sometimes respond to the tone Orozco creates.

López-González says she provided the pianist with a few musical starting points for certain scenes, but encouraged him to go wherever the scene felt like it needs to go. "I believe in the power of improv," she says. "I believe in the possibility of the brain to problem-solve in the moment. I see [this play] as me as an artist creating an environment for other artists to create in. So while I told [Orozco] I wanted him to start with, say, a piece of Astor Piazzolla's tango music, at some point he will abandon that and it becomes César Orozco's music."

The onstage result creates some disarmingly lovely, touching, and sad moments, and frequently you feel like you're watching an uncomfortably private moment, as if you went out to dinner and the couple next to you decides to break up in public. "I really wanted a very visceral feeling" when watching the play, López-González says, adding that it wasn't until rehearsals started that she saw how the experiment she set up was starting to work out. "This conversation to me is like a duel, like a dance—that's why the tango was a very obvious musical choice to start with. Because I also wanted something else, I wanted improv. And after seeing [the performers] get into character and put an interpretation on top of what I'd written, and hear what [Orozco] responded to them, I thought, OK, I wasn't that crazy after all."

Ultima Partida moves to Germano's in Baltimore on Thursday and then to Flashpoint's Mead Theatre Lab in Washington D.C., Friday through Sunday. The play is produced by La Petite Noiseuse Productions and the partial financial sponsor is the Johns Hopkins Medical Institutions' Office of Cultural Affairs.