'Shocking' garment designed by Johns Hopkins students could save lives 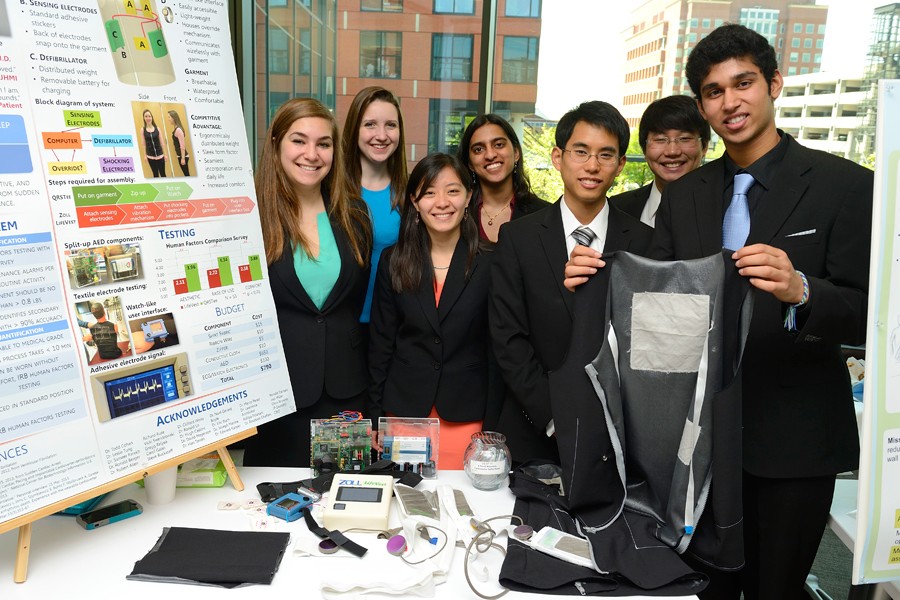 Johns Hopkins biomedical engineering students have designed a lightweight, easy-to-conceal shirtlike garment to deliver lifesaving shocks to patients experiencing serious heart problems. The students say their design improves upon a wearable defibrillator system that is already in use and should help persuade patients at risk for sudden cardiac arrest to wear the system around the clock. 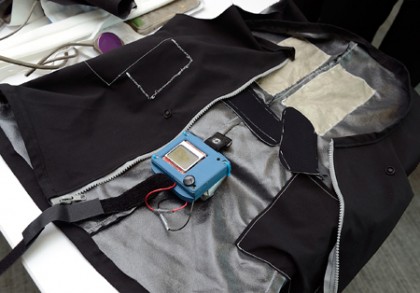 Image caption: In students’ prototype defibrillator vest, the conductive textile cloth for the shocking electrodes is sewn into the back of the garment, where the two light gray rectangles can be seen.

"In two studies, up to 20 percent of patients who received the defibrillator garment that's already available did not keep it on all the time because of comfort and appearance issues, problems sleeping in it, and frequent 'maintenance alarms,' which occur when the device does not get a good signal from sensors on the patient's skin," says Sandya Subramanian, who led the undergraduate team that built the new prototype. "We set out to address these issues and design a device that heart patients would be more likely to wear for longer periods of time—because their lives may depend on it."

Wearable defibrillators, which rest against the skin, are designed to detect arrhythmia, an irregular heart rhythm that can cause death in minutes if it is not stopped by controlled jolts of electricity. People who face this higher risk of sudden cardiac arrest include patients who have undergone open-heart surgery and those who have recently survived a heart attack.

The long-term treatment for these patients is to surgically implant a small defibrillator, similar to a pacemaker, in the chest. The operation, the students say, costs roughly $150,000 and generally takes three months of testing and insurance review before being approved. During this waiting period, insurance providers usually pay for the rental of an external defibrillator garment to protect the patient. More than 100,000 devices have been prescribed in the United States in the past eight years or so that it has been available.

The students' defibrillator prototype emerged from the undergraduate design team program offered by the Department of Biomedical Engineering, which is shared by the university's schools of Medicine and Engineering.

The team's assignment—to develop a system that would lead to greater compliance among patients—was sponsored and mentored by Todd J. Cohen, who earned his undergraduate and medical degrees at Johns Hopkins and is now director of electrophysiology at Winthrop University Hospital in Mineola, N.Y.

"Our JHU design team students were able to survey electrophysiologists and their patients who wore the currently approved wearable cardioverter defibrillator," Cohen says. "The students' research confirmed my personal findings, namely that the current device has several components that could be improved. The students took this information and with my guidance designed a better mousetrap. The new device incorporates features that should improve patient compliance, ease of use, and overall functionality."

In particular, the students replaced the existing chest harness–style garment with a more comfortable vestlike design made of thin, breathable, and stretchable fabric that can be worn unobtrusively beneath clothing. Its electrical components, capable of delivering a 200-joule shock to stop a deadly arrhythmia, are encased in thin pockets on the sides. A bulky control box hanging from the patient's waist was replaced with a smaller wireless system worn on the wrist. This controller gives the wearer a 30-second warning to stop an impending shock if the system has been activated by a false alarm.

"We did not change any of the science involving how a wearable defibrillator works," team member Melinda Chen says. "We just changed the form of the device. We pursued a 'slip on and forget' approach to minimize the user's need to maintain and interact with the device."

The prototype has already garnered some attention. It recently won a $10,000 first prize in a competition sponsored by the North American Professionals and Entrepreneurs Council. Electrophysiologist Cohen, the team's mentor, says that the prototype was also well-received recently by physicians, medical researchers, and device makers at the noncompetitive Stanford Biodesign Conference. At the annual Johns Hopkins Biomedical Engineering Design Day event, organized by the university's Center for Bioengineering Innovation and Design, the project won the Most Innovative Design honor and took first place in the People's Choice Award contest.

The students have completed preliminary testing at the Johns Hopkins Hospital Simulation Center, using manekins wired to mimic heart patients. The team has obtained a provisional patent covering some of their innovations. Team members plan to continue to refine the prototype and to confer with medical device makers about advancing the project.