Susan Wojcicki, CEO of YouTube, addressed the Class of 2014 at Johns Hopkins University's commencement today, sharing personal stories from her own remarkable career and interspersing words of wisdom for the new graduates. 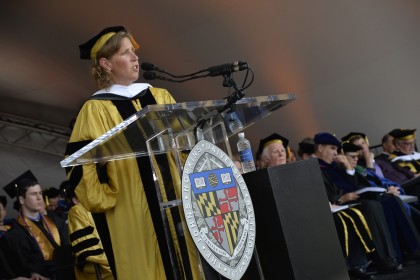 Wojcicki, who became head of the video-sharing powerhouse earlier this year, noted that most of this year's graduates were born in the same year as the Internet. She recalled her own graduation day in 1990 at Harvard University (though admitted she couldn't remember a single thing the speaker at her commencement said).

"Back then, only really bad things went viral. Like mono. Things you definitely did not want," Wojcicki quipped.

"The world has changed a lot since I graduated. The acceleration of technological progress is unmatched in our history, and it's not going to slow down. It's only going to speed up."

Before joining YouTube, Wojcicki had served as senior vice president of advertising and commerce at Google, where she led teams that helped define the vision and direction of the company's monetization platforms, helping it become a $43.7 billion business responsible for more than 40 percent of total digital ad revenue in the United States.

Her introduction to Google was serendipitous. She rented her family's Menlo Park, Calif., garage to a couple of Stanford University graduate students.

"They seemed nice. Their idea sounded kind of crazy," Wojcicki recalled. "Back then, no one had heard of Larry Page and Sergey Brin or the new company with the funny name. Google? What? What does that mean?"

But Wojcicki was fascinated by their ideas and, she said, began to appreciate just how important their idea was. So, in 1999, she quit her job at Intel and went to work for Google, which at the time had no revenue.

"Life doesn't always present you with the perfect opportunity at the perfect time," Wojcicki said. "Opportunities come when you least expect them, or when you're not ready for them. Rarely are opportunities presented to you in the perfect way, in a nice little box with a yellow bow on top. … Opportunities, the good ones, they're messy and confusing and hard to recognize. They're risky. They challenge you.

Wojcicki spoke about the early days of online video, of Google's promising fledgling efforts in this fast-growing area, and of the strategic about-face that led to its $1.65 billion acquisition of its competitor, YouTube, in 2006.

"If I hadn't owned up to my mistake and confronted failure fast instead of ignoring it, I would not be here today," she said, adding, "When you fail, face your failure. Face it head on. Admit it. Grow from it. When the world spins so fast it means no one knows what the right answer is and everyone will face failure. Ideas that were once can't-miss, missed. Companies that were sure-fire, went down in flames. It's what you do when that happens that determines who ultimately succeeds and who does not."

Wojcicki closed by suggesting that if there's one thing we can learn from the advent and explosion of the Internet over the past two decades, it's that no one knows what the future holds, and that truism creates tremendous opportunities for the Class of 2014.

"This class, this generation that's grown up in a digital world, you understand the power of connection like no other class that came before you," she said. "You can make an impact far greater than the engineers and doctors and physicists and governors and writers and cabinet secretaries and 22 Nobel laureates who came before you on this campus. Yes, you. All of you, here, wearing those black hats and black robes. You have opportunities that none of them could have imagined. And now you have an education that will allow you to design and create the future for all of us. ... You can be the crazy kid in some lady's garage going on and on and on about how you're going to change the world. And then you can go out actually do it." 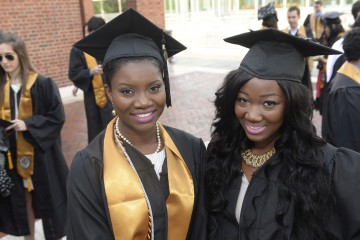 Published May 22, 2014 Video Photos
About 1,500 students claimed their degrees today at the commencement ceremony for all of Johns Hopkins University's divisions and campuses 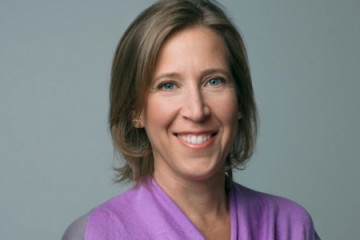