About 1,500 students received their degrees today at the commencement ceremony for all of Johns Hopkins University's divisions and campuses.

The ceremony included remarks from President Ronald J. Daniels and from the featured speaker, Susan Wojcicki, CEO of YouTube; the conferring of all degrees; and the bestowing of honorary degrees. In addition, all undergraduate students as well as doctoral students in attendance had their names announced as they filed on stage to have their degrees recognized.

"Graduates, today I have the great honor, as both a president and a parent, of joining every family member gathered here with admiration, a sense of wonder, and infinite optimism about your future," Johns Hopkins University President Ronald J. Daniels—whose son, Drew, was among the graduates—said during his commencement remarks. "We are so very proud of you all.

"So, members of the Class of 2014, choose wisely. And if you don't, don't worry—you'll have the chance to choose and choose again." 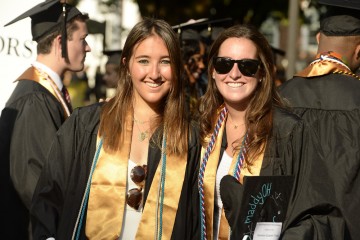