Quick show of hands: Who is ready for winter to be over? 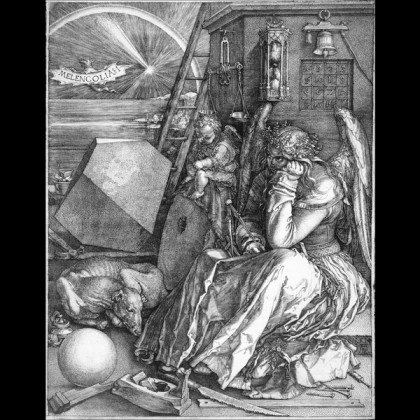 From the Midwest and Southeast to the East Coast, this winter has delivered some of the coldest and/or snowiest weather on record. What better way to prepare to say goodbye to this frigid, dark, dreary season than with an evening of Renaissance music and literature of melancholy.

"The Saddest Music in the World" takes place Friday from 5:30 p.m. to 7:30 p.m. at Levering's Great Hall on the Johns Hopkins University's Homewood campus and is free and open to the public. The event marks the debut of the Notes & Quotes series, which pairs Peabody Institute musicians and students with Johns Hopkins literature students and faculty.

"What we've come up with is a sort of melancholy mixtape of black bile's greatest hits," says Drew Daniel, an assistant professor in the Department of English and one of the evening's co-organizers. "I think [given] the sort of grim hibernation mood that everybody is in in February, I think this event is going to be a soothing farewell to winter."

The Notes & Quotes series was made possible by a gift from Linda and Bernard Ferrari, dean of the Carey Business School, to establish a program that brought music and literature students together. With organization help from the Sheriden Libraries, Daniel, visiting Italian assistant professor James Coleman, and Mark Cudek, director of Early Music Program and Peabody Renaissance Ensemble, started talking programming ideas.

"Pretty early on I proposed melancholy because it's my obsession," Daniel says, adding that he spent 12 years researching and writing about the subject for his 2013 book, The Melancholic Assemblage: Affect and Epistemology in the English Renaissance. The book is addictively readable, a modern and original exploration of melancholia as defined by both classical Greek philosophy as a quality that accompanies genius and by Galen as a potentially harmful physical ailment. As the book's subtitle hints, Daniel focuses on English works, chiefly Shakespeare's Love's Labor Lost, the character Antonio in The Merchant of Venice, John Milton's Samson Agonistes, and Richard Burton's The Anatomy of Melancholy. He tackles these texts with a contemporary eye and a creative voice that infuses his examination of stereotypically "unpleasant" emotions, psychological states, art, and anomie with a contagious enthusiasm.

Reading about melancholia is rarely quite so playful, and he's brought that sensibility to the "The Saddest Music in the World." The reading of melancholic texts will be paired with the Peabody Consort playing selections of music from Giovanni Coprario, John Dowland, and Tobias Hume. "I think the literary readings are designed to foreground the variety of forms that melancholy could take," Daniel says. "Sometimes humorous, sometimes angry, sometimes amorous, sometimes suicidal—there's actually a whole rainbow of emotions within the blackness of melancholy, and I think this event is going to capture that diversity."

The texts, Daniel adds, also map the rediscovery of the link between genius and melancholy by Florentine Renaissance philosopher, doctor, and musician Marsilio Ficino, whose ideas eventually traveled to England.

"So we'll have some readings of Ficino and then I'll be reading a few scenes from Shakespeare, Milton's "Ill Pensoroso," and some of the John Donne sermons called 'Death's Duel,' which is intensely morbid," Daniel says. "And that will be paired with some really gorgeous lyrical music from Giovanni Coprario and [John] Dowland. Dowland is sort of the Morrissey of the 1590s."

The hope for the evening—and the Notes & Quotes series itself—is to get music students thinking about literature and vice versa. Music complements and enriches the understanding of literature in life; it should in the academy as well.

"That's our goal—to see our connections across disciplines and across institutions," Daniel says, noting how this kind of collaboration brings together people with shared interests. And this inaugural event provides comes at just the right time in the year to rally everybody who already understands how good it can be to feel bad. "I think ["The Saddest Music in the World"] will be a lovely way to mourn the death of a week and open the weekend."