Surgery for sale: The ethics of health care bartering in a social media marketplace

When his medical insurance company refused to pay for his $70,000 hip replacement, Perry Hunt took matters into his own hands, according to an article on CNN's website.

His Web search for "cash surgeries" led him to Medibid—an online marketplace where doctors can bid—yes bid—on medical care. That $70,000 hip replacement Perry Hunt needed? A doctor on MediBid offered it to him for $21,000.

Here's how the bidding process works: Patients looking for medical care submit a request to MediBid—patients either pay $25 per request, or a $4.95 per-month membership fee. For an annual fee of $50-$250, doctors create profiles outlining their certifications and experience. When a patient requests a certain procedure, doctors can offer custom quotes. The idea is that the patient will continue accepting bids until he or she is satisfied with the price.

MediBid is just one example of the current push for more transparency in medical pricing. Because of the way insurance companies set up their billing, many patients agree to procedures without being fully aware of the final cost of the services rendered. MediBid allows doctors to cut out administrative and other mediated costs, so they can be more forthcoming about what a procedure will cost. A patient can agree to the price or continue to solicit bids.

While there are benefits to MediBid, users should approach the website with "a sense of caution," says Matthew DeCamp, assistant professor at the Johns Hopkins Berman Institute of Bioethics.

For DeCamp, cost transparency in health care is certainly a step in the right direction, but he wonders if it is "unequivocally a good thing." While MediBid encourages price transparency, DeCamp suggests it doesn't do so within the overall context of quality. "When patients get online," he says, "although they see the price, they don't have ready access to the quality of services they're being offered." Because of the bartering nature of MediBid, many bidders might impulsively accept the cheapest doctor without ever wondering about that doctor's qualifications or record.

But here, too, DeCamp has reservations. "Are patients with acute illnesses really in the best position to judge the various prices being presented?" DeCamp wonders if our evaluation of sites like Medibid varies based on the type of service being sought. "We might think differently about a patient getting online for the best price on a colonoscopy, versus someone looking for a potentially lifesaving surgery, such as for cancer," he says. Patients who are desperate for health care might have their decision-making clouded by their desperation.

This is also problematic for DeCamp, who wonders whether patients realize that not all doctors are bidding on sites like MediBid. Could it be that only certain kinds of doctors —say, doctors whose own practices aren't meeting their financial bottom lines—use MediBid? If the supply of doctors isn't an accurate representation of the diversity that exists in the medical marketplace, then is MediBid as "free market" as it purports to be?

Over the past several decades, health care has become increasingly commodifed. Does MediBid further this trend or reverse it? Are doctors who offer their services on social media motivated by their exasperation with current insurance billing practices or by their desire to make an easier profit? Though MediBid might seem at first like a charitable website, there's no way of ensuring that only honest doctors will offer bids. And since MediBid allows doctors to set their own prices, it's possible that they will continue to overcharge for their services. As DeCamp says, "Although doctors may honestly want to help patients access their services, I don't think I would go so far as calling it altruism." Bidding doctors are also out to make a profit—patients should be aware of that.

As it stands, DeCamp remains undecided about MediBid's effectiveness. "Short of knowing who exactly is using the website, we just don't have enough information to know [how] widespread or how much impact, in terms of better access and lower costs, this phenomenon will have."

For now, though, it's certainly the case that MediBid adds a new dimension to the ongoing debate about health care costs and transparency. And though DeCamp has significant reservations about the site's implications, he encourages patients to "do their own homework." Researching a particular doctor before receiving treatment remains essential—both in the online and traditional medical marketplace. 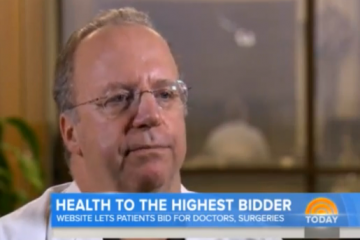 Medibid on the 'Today Show'