John M. Freeman, the Lederer Professor Emeritus of Pediatric Epilepsy and professor of Neurology and Pediatrics at Johns Hopkins University School of Medicine and a founding faculty member of the university's Berman Institute of Bioethics, died on Jan. 3. He was 80. 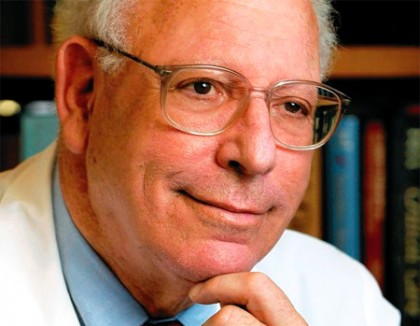 Freeman was an internationally renowned pediatric neurologist and medical ethicist whose questioning of established medical practices revolutionized the treatment of pediatric epilepsy and advanced the development of modern biomedical ethics. His forceful advocacy of two long-abandoned therapies—one requiring a strict, unconventional high-fat diet, the other involving surgery to remove half of the brain of children tormented by unremitting seizures—led to their revival and current acceptance as effective treatments.

Freeman was the founding head of the Johns Hopkins Division of Pediatric Neurology and director of the Birth Defects Clinic, as well as director of what is now the John M. Freeman Pediatric Epilepsy Center.

"Few Hopkins physicians have had a more profound effect than John Freeman on how we treat young patients who suffer from epilepsy and congenital abnormalities—and how we address the often-difficult ethical issues surrounding these potentially heartbreaking cases," Ronald R. Peterson, president of the Johns Hopkins Hospital and Health System and executive vice president of Johns Hopkins Medicine, told The Baltimore Sun.

An outspoken advocate of patient rights throughout his career, Freeman wrote extensively on the ethical and medical issues surrounding the treatment of severely ill newborns with congenital defects. He showed special concern for maintaining the dignity of individual patients and striving to ensure that each had a life that was as independent, fulfilling, and as close to normal as possible. He was the founding chairman of the Johns Hopkins Hospital Ethics Committee and co-director of an undergraduate medical student course in bioethics.

"John was an institutional visionary, as well as a phenomenal and extraordinary mentor," said Berman Institute founding director Ruth Faden. "He was absolutely certain that we could have a world-class bioethics program at Hopkins if we never gave up. 'Build it and they will come,' was something John said to us time and time again. And we didn't give up, and we did get a phenomenal first-rate program here at Hopkins, and John was just critical; he was the person who had the unflagging confidence in a future for bioethics at Johns Hopkins."

Freeman was a 1954 honors graduate of Amherst College and a 1958 graduate of the Johns Hopkins School of Medicine. After completing his pediatrics internship and residency at Hopkins in 1961, he undertook a three-year fellowship in neurology and child neurology at Columbia Presbyterian Medical Center. He returned to Hopkins in 1969 and rose through the academic ranks, becoming a full professor in pediatrics and neurology before being named the Lederer Professor of Pediatric Epilepsy in 1991. He became an emeritus professor in 2007.

Freeman is survived by his wife of 57 years, Elaine Kaplan Freeman, Johns Hopkins Medicine's former vice president for corporate communications, who served as head of the Communications and Public Affairs Office from 1982 to 2005; two sons, Andrew D. Freeman of Baltimore and Joshua L. Freeman of Chevy Chase, Md.; one daughter, Jennifer B. Freeman of New York City; and six grandchildren.