Ryschkewitsch responsible for technical readiness of all NASA programs 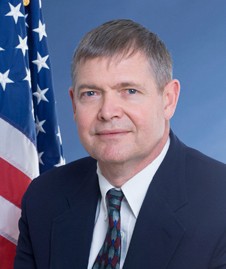 Ryschkewitsch, a highly regarded expert within the space science and engineering community, is presently responsible for the technical readiness of all NASA programs. He previously served as the deputy director for NASA's Goddard Space Flight Center and director of Goddard's Applied Engineering and Technology Directorate.

"We are pleased to welcome Mike to APL and the Johns Hopkins community," said Ralph Semmel, APL director. "He brings to our organization a unique blend of dynamic leadership, deep technical expertise, and significant experience managing large, complex space programs."

Ryschkewitsch began his career at NASA working on the Cosmic Background Explorer and subsequently led and contributed to many other science missions, including the Wilkinson Microwave Anisotropy Probe (WMAP), the Swift Gamma-Ray Burst Mission, the Terra satellite, and the Corrective Optics Space Telescope Axial Replacement (COSTAR) for the first Hubble Space Telescope servicing mission.

At APL, Ryschkewitsch will lead a sector of technical experts who tackle some of NASA's and the military's toughest space science and systems engineering challenges. Building on a legacy that began with the design and development of Transit, the first satellite navigation system, APL has dispatched spacecraft and instruments across the solar system.

One APL-built probe, Messenger, is currently in orbit around Mercury; another, New Horizons, is en route to Pluto, and several APL-designed sensors are scanning the moon, Mars and Saturn. One, on Voyager 1, has entered interstellar space. The Lab also is operating the twin Van Allen Probes that are analyzing the radiation belts swirling around Earth, and APL is developing Solar Probe Plus, a fortified spacecraft that will fly through the extreme heat of the sun's outer atmosphere to study the origins and behavior of the solar wind.

In all, APL has built 68 spacecraft and nearly 200 instruments during the past five decades, including its first two multi-mission cubesats that were launched Nov. 19.