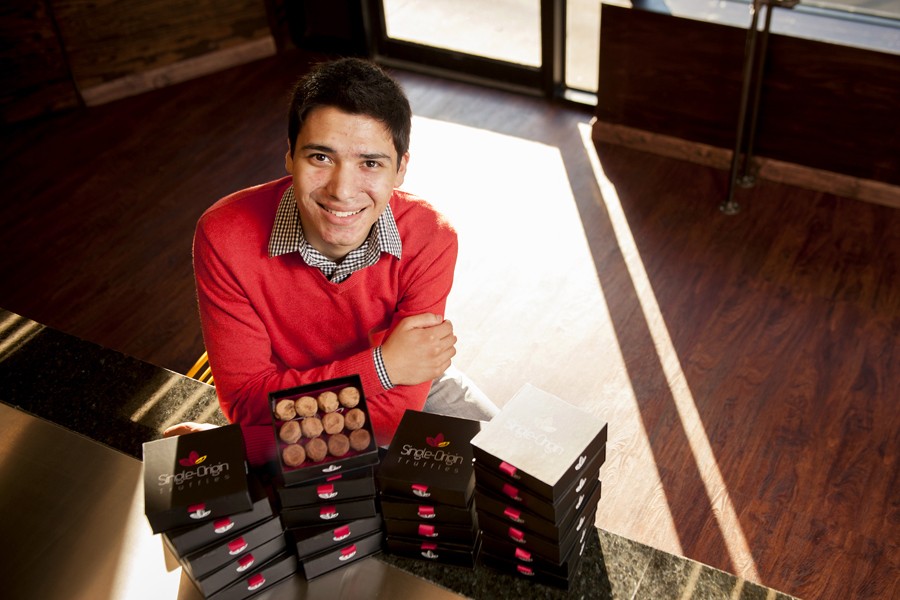 If Jamasen Rodriguez gets his wish, chocolate truffles will be the next mocha Frappuccino and skinny vanilla latte.

His sweet plan has been set in motion.

Rodriguez, a junior economics major at Johns Hopkins, recently opened his first chocolate shop, a small store named Jama Cocoa located in downtown Arbutus, Md. For Rodriguez, the opening marks phase 1 in a grand scheme to create "the Starbucks of chocolate," with a Jama Cocoa in as many urban centers as possible.

The store, which will have its grand opening on Halloween, features Rodriguez's line of chocolate truffles, which up until now he's been selling by mail order from his company's website and at area restaurants, including 13.5% Wine Bar in Hampden and the Waterstone Bar and Grille in Mount Vernon. Jama Cocoa also sells hot chocolate, tea derived from the cocoa bean, and other chocolate-flavored items.

But don't think fancy French patisserie—the atmosphere at Jama Cocoa is purposely relaxed, urban, and artsy. The chairs are wire countertop stools designed by Hee Welling, and the countertops are made from pipe and wood. Initially, the walls will display the work of Brooklyn artist Jason Borbay, though Rodriguez welcomes submissions from local artists for future exhibits.

Rodriguez 's love of chocolate dates back to age 10, though he assumes he's always been a fan of the confection. An uncle often brought him Ghirardelli chocolates when he would visit, and he marveled at the cooking of Jacques Torres, known as "Mr. Chocolate," on the Food Network. "Chocolates became my guilty pleasure," he says.

Rodriguez made his first chocolate in his senior year of high school. He found recipes online and "fixed them," altering what he didn't like. When he came to Johns Hopkins, Rodriguez aimed to take his hobby to the next level, fusing his passions of business and cooking. "I view myself more as a businessman than an artisan," he says. "I enjoy making chocolates, but I have bigger plans."

After his freshman year, Rodriguez returned home to Modesto, Calif., for the summer and worked in a restaurant owned by Tom Gallo, a member of the Gallo wine family. Rodriguez told Gallo about his chocolate-making aspirations, and the restaurateur agreed to help fund his startup endeavor, to the tune of $100,000. "He wanted me to jump on this property in California and start right away. But I was like, I have to go back to school," he says.

Instead, he launched a website to generate some revenue and get his chocolates to market.

Upon his return to Baltimore, Rodriguez used a cramped kitchen in his residence hall to continue making his truffles. He later found the space in Arbutus, the former site of a Rita's Italian ice and custard shop, for his production kitchen.

As he built his business, Rodriguez forged a relationship with his childhood idol, Torres. He tweeted Torres before coming to Johns Hopkins and asked if the two could meet. His request went unanswered, but he did later visit his shop where Torres signed a book for him and posed for a photo. After Jama Cocoa was born, Rodriguez once again tweeted Torres and asked to meet. The chef agreed, and their personal relationship has since blossomed.

"When we met the second time, I told him my business plan and he agreed to be my mentor," Rodriguez says. "That was the coolest feeling ever."

Realizing he needed help, Rodriguez enlisted the assistance of fellow Johns Hopkins students and his brother to help run operations and make chocolates—roughly 15,000 handmade truffles per month—to keep up with online orders. He ships only to areas within FedEx Ground's two-day delivery zone. "This is to allow for the end customer to have enough time to enjoy the product fresh and to limit the amount of time the chocolate is spent in FedEx warehouses or in transit," he says. "The boxes are packaged with coolant, but we want to limit the product's chances of deterioration as much as possible."

Like real estate, cocoa is all about location, location, location, Rodriguez says. The origin dictates the chocolate's viscosity, texture, and character, and like a fine wine, the hints of other flavors. He shuns plain chocolate, he says. A good truffle will exhibit layered characteristics, a concept he emphasizes in his own products.

Currently, he sells six types of chocolates—single-origin truffles from Ecuador, Venezuela, Peru, Colombia, Madagascar, and Hawaii. The Venezuela truffle, he claims, is a trifecta of caramel, fruit, and almonds.

Last spring, Inc. magazine named Jama Cocoa one of the coolest college startups of 2013. Rodriguez knows the odds are against him to create a successful franchise, but he embraces the challenge. He plans to open a second location in the near future, either in Baltimore's Inner Harbor or in Washington, D.C.

How will he handle a full course load and a startup business? With lots of enthusiasm, he says.

"Running the store and schoolwork will be tough, I admit," he says. "But I have hired three chocolatiers to make the product and one general manager for the store. My partners and I will take turns going to the shop to make sure things run smoothly."