Legends of the Summer tour makes stop in Baltimore on Thursday

Jazz trumpeter Dontae Winslow, a West Baltimore native and graduate of the Peabody Institute of Johns Hopkins University, returns to Baltimore on Thursday with the Legends of the Summer tour co-headlined by singer-songwriter Justin Timberlake and rapper Jay-Z.

The tour, which includes 14 performances at venues in the U.S. and Canada, began July 17 in Toronto and has visited New York, San Francisco, and Chicago. Thursday's show will be at Baltimore's M&T Bank Stadium; tickets are still available.

Winslow, who in 2012 debuted the signature trumpet he helped design and was honored with the Peabody Young Maestro Award, plays trumpet and flugelhorn in the band that backs both performers.

"The tour is going wonderful," Winslow says during a stop in Detroit. "A city every two days, and 80,000 people. It's crazy how many people we're playing in front of."

Winslow is no stranger to sharing the stage with musical superstars. As a student at the Baltimore School for the Arts, then at the Peabody Institute, he had opportunities to play with Wynton Marsalis, the Roots, Stevie Wonder, Gary Bartz, and Gary Thomas. Since moving to Los Angeles in 2003, he's earned more high-profile gigs, including playing in the orchestra that backed Jay-Z during his 2012 Carnegie Hall benefit concerts for a United Way scholarship fund. (Winslow's solo during an interlude at one of those concerts can be viewed online.)

Winslow got together with Timberlake when his friend and colleague Adam Blackstone—a music director for Drake, Janet Jackson, Nicki Minaj, and Rihanna, among others—was assembling a band for Timberlake. "We do a lot of different gigs together," Winslow says of Blackstone. "And when the gig came up for Justin [Timberlake], he put his star players together and I was one of them. That was almost a year ago now. So we started rehearsing at the top of the year."

The band is featured in Timberlake's video for "Suit & Tie," and it backed Timberlake during his Saturday Night Live performances earlier this year and at the 2013 Grammy Awards, where Timberlake and Jay-Z performed together. For the Legends tour, Jay-Z added a few musicians to Timberlake's band to create his own backing ensemble. "If you look at Saturday Night Live with Justin, you can see the energy [of the band] onstage," Winslow says. "Everyone is the best in their element. So when Jay-Z saw that energy, he was like, there's no sense in switching bands."

It's a mid-size ensemble—two drummers, three keyboard players, four horns, a percussion section, four backing vocalists, and a DJ. And it's a blast. "I'm loving it," Winslow says. "This is one of the best gigs of my life. Every individual is 100 percent excellent. They are passionate. Everybody's so good with their particular gift that it comes together to make a great collage of sound. For me, this is the top of the food chain."

Some of the musicians he has met through his backing band gigs will appear on a jazz album Winslow plans to release later this year.

"I got a hodge-podge of my favorite musicians that I've played with in the last two years and I said, 'Let's go in the studio and while we're on the road and hanging and playing on this level, let's record how we sound,'" Winslow says. "I took these cats and took first takes of everything. I want it to be raw—you know how in the old days you'd go in and cut a record straight down and there's a punch to it? So I just cut a straight-down record, 10 songs. It's called The Baltimore Story."

The album is due out this fall. For now, Winslow has a homecoming gig to think about.

"I'm excited to play in Baltimore," he says and laughs. "That's going to be so amazing. I'm coming to Baltimore with two megastars. That's not too bad for a hometown dude." 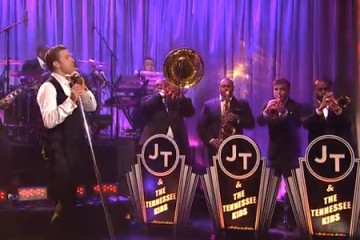 Justin Timberlake and band on 'SNL' 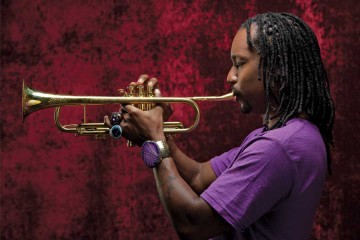