In 'Americanah,' Adichie explores how we talk (and don't talk) about race

Ifemelu, a young woman from Lagos, Nigeria, learns a few things about herself in the course of living and studying in America. For instance: Black girls from Africa don't wear tight shirts. Also: Black girls from Africa who wear their hair in braids won't get a job. These ostensible facts are told to her by friends and strangers and said with such common-sense certainty that Ifemelu initially wonders why she didn't know such things herself, since she is usually the black girl from Africa that people are referring to without coming out and just saying so. Sometimes these thoughts that people share with her are just plain odd: only black women who aren't from Africa wear tight shirts? And sometimes these shared thoughts explode in her brain. A guy at the farmers market inquires: Does the black girl from Africa ever consider why her white boyfriend likes that she keeps her hair natural—or, as he says, "looking all jungle like that"? 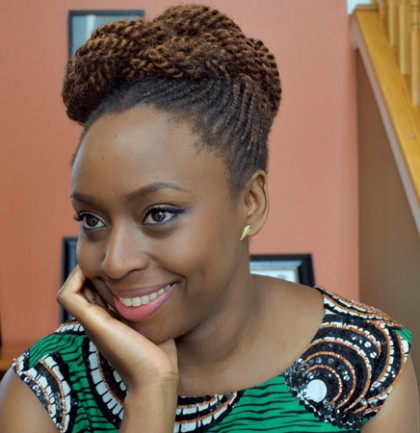 Chimamanda Ngozi Adichie boldly dives into the fragilely inflexible way Americans talk—and don't talk—about race with Americanah (Knopf), her third novel. It's a political dissection of identity wrapped up in a romance, and Adichie, a 2004 graduate of the Writing Seminars master's program, burrows deeply into the passive-aggressive control trapped in the everyday language that we use to talk about ourselves, the people we feel like we share something with, and the people we feel like we don't share anything with—who all happen to live in the same neighborhood, city, and country.

That she does it with such a comic and tender touch is what's so impressive. Americanah tells the story of Ifemelu and her relationship with Obinze, with whom she fell in teenage love in Lagos. They both dreamed of something else and left Nigeria—her United States experience eventually took her to Princeton University; his saw him overstaying his visa and working menial jobs in London before being deported to Nigeria. She acculturates somewhat and finds herself feeling not quite right; he ends up finding success by returning home. It's in many ways a soap opera plot, which Adichie uses to paint a sprawling picture of the contemporary immigrant experience.

Americanah chiefly follows Ifemelu, whose encounters with America are sometimes turned into anonymously written posts on her sometimes scathing, sometimes profound, and sometimes reactionary blog, "Raceteenth or Various Observations About American Blacks (Those Formerly Known as Negroes) by a Non-American Black." These posts, which sometimes appear in the text, are one of Adichie's disarmingly brilliant touches in the novel, a way to point out the slippery way language inadequately addresses race in America, even in the mind of one person. Upon overhearing a few affluent white couples talk about the ways their charities help Africa, Ifemelu thinks to herself:

There was a certain luxury to charity that she could not identify with and did not have. To take "charity" for granted, to revel in this charity towards people whom one did not know—perhaps it came from having had a yesterday and having today and expecting to have tomorrow. She envied them this.

Adichie expresses Ifemelu's feeling here of being part of a people who receive help instead of people who give it, in a passive manner: it's something that happens to her when these couples speak. On the blog, however, Adichie allows Ifemelu an authorial agency that captures the indulgence of online confidence, the self-righteousness of anonymity, and the self-actualization that comes from telling yourself you're writing what you really think while secretly hoping somebody reads it and agrees with you in posts that include "Not All Dreadlocked White Guys Are Down," "Badly Dressed White Middle Managers from Ohio Are Not Always What You Think," "Why Dark-Skinned Black Women—Both American and Non-American—Love Barack Obama," "Understanding America for the Non-American Black: What Do WASPs Aspire To?," "What Academics Mean by White Privilege, or Yes It Sucks to Be Poor and White but Try Being Poor and Non-White."

It's a witty way to tap into and riff on American self-invention and to explore the gulf between life as experienced and the way we talk about it—and how the ways we talk about it change depending on who is listening or when we think we can do so without fear of what somebody else is going to think. Adichie performs this exploration of cultural attitudes, norms, and assumptions with a nimble touch, especially thanks to the clarity of her settings. She possesses a sure eye and ear for illuminating details that give her story a cinematic sweep, and she paints Ifemelu's city experiences—be they in Philadelphia, central New Jersey, or Baltimore—with the penetrating gaze of a foreign cinematographer first peering upon America through a viewfinder, flummoxed by how a place with so many big, open spaces is home to so many small, closed minds.