Imagine millions of jigsaw puzzle pieces scattered across a football field, with too few people and too little time available to assemble the picture. 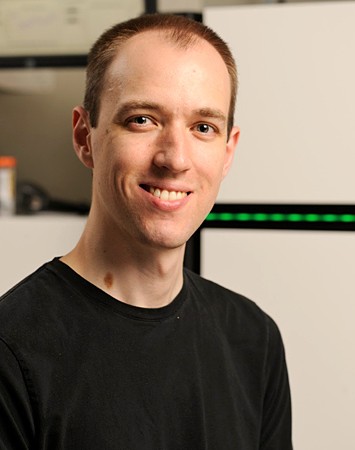 Scientists in the new but fast-growing field of computational genomics are facing a similar dilemma. In the past few decades, these researchers have started to assemble the chemical blueprints of the DNA found in humans, animals, plants, and microbes, unlocking a door that will likely lead to better healthcare and greatly expanded life-science knowledge. But a major obstacle now threatens the speedy movement of DNA's secrets into research labs, two scholars in the field are warning—a flood of unassembled genetic data is being produced much faster than current computers can turn it into useful information.

That's the premise of a new article, co-written by a Johns Hopkins bioinformatics expert and published in the July 2013 issue of IEEE Spectrum. The piece, titled "DNA and the Data Deluge," was co-authored by Ben Langmead, an assistant professor of computer science in JHU's Whiting School of Engineering, and Michael C. Schatz, an assistant professor of quantitative biology at Cold Spring Harbor Laboratory, in New York state.

In their article, the authors trace the rapidly increasing speed and declining cost of machines called DNA sequencers, which chop extremely long strands of biochemical components into more manageable small segments. But, the authors point out, these sequencers do not yield important biological information that researchers "can read like a book. Instead, [they] generate something like an enormous stack of shredded newspapers, without any organization of the fragments. The stack is far too large to deal with manually, so the problem of sifting through all the fragments is delegated to computer programs."

In other words, the sequencers produce the genetic jigsaw pieces, and a computer is needed to assemble the picture. Therein lies the problem, Schatz and Langmead say: improvements in these computer programs have not kept pace with the enhancements and widespread use of the sequencers that are cranking out huge amounts of data. The result—the puzzle cannot be pieced together in a timely manner.

"It's a problem that threatens to hold back this revolutionary technology," the authors write. "Computing, not sequencing, is now the slower and more costly aspect of genomics research."

The authors then detail possible computing solutions that could help erase this digital bottleneck. In his own research at Johns Hopkins, co-author Langmead is working on some of these remedies. "The battle is really taking place on two fronts," he said. "We need algorithms that are more clever at solving these data issues, and we need to harness more computing power."

An algorithm is a recipe or a series of steps that a computer must complete in order to accomplish a task. "With cleverer algorithms," Langmead said, "you can do more steps with a fixed amount of computing power and time—and get more work done."

The Johns Hopkins researcher has also had extensive experience in the second digital battle zone: assembling more computing power. This can be accomplished by putting multiple computers to work on assembling the DNA jigsaw puzzle. The linked machines can be at a single location or at multiple sites connected over the Internet through the approach known as cloud computing. For the latter option, Langmead said, scientists may be able to do their work more quickly by tapping into the huge computing centers run by companies such as Amazon and "renting" time on these systems.

Langmead said he and Schatz wrote the IEEE Spectrum article to call attention to a significant computing problem and to jumpstart efforts to address it. The magazine is the flagship publication of the IEEE, the world's largest professional technology association. "We hope the people who read our article can contribute to some solutions and make the work of genomic scientist much easier," he said.