Christina Hammock is one of eight candidates invited to train at NASA. 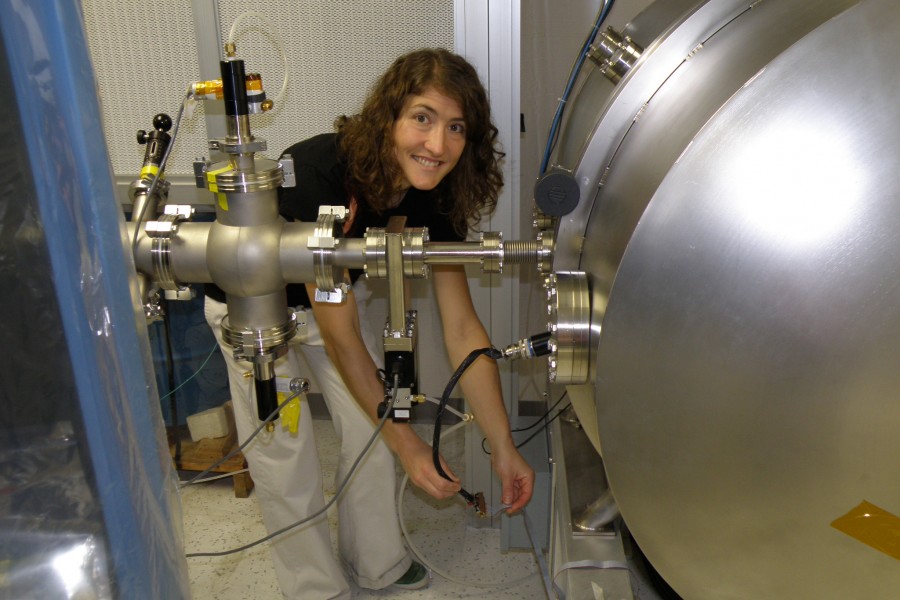 Image caption: Christina Hammock at work at APL, using a particle accelerator to test the Jupiter Energetic-particle Detector Instrument (JEDI, now flying aboard the NASA Juno mission to Jupiter, which launched in 2011).

For years, Christina M. Hammock created complex scientific instruments bound for space. Now, as one of eight new NASA astronaut candidates, she has her own chance to explore the stars.

Hammock, an electrical engineer who has worked at APL since 2007, was selected on June 18 as one of eight finalists for NASA astronaut training.

"It feels incredible, and it makes me feel like all my hard work was worth it," Hammock said to the media on her selection. "I also realized it's not always hard work if you're doing what you love and following your dreams."

A native of Jacksonville, N.C., Hammock is one of more than 6,100 applicants for the program. In August, she and seven other candidates will head to NASA's Johnson Space Center in Houston to begin two years of training that could culminate in a mission to the International Space Station, among other potential targets. It is NASA's first new astronaut candidate class in four years.

Long-distance travel—whether across the globe or into orbit—is an area in which Hammock specializes. She's currently station chief of a National Oceanic and Atmospheric Administration (NOAA) Climate and Atmospheric Observatory in American Samoa; she has also covered much the globe (including Greenland and the South Pole) for work, research, and adventure travel. Before being selected by NASA, Hammock was set to return to APL later this year when her NOAA assignment ended.

When her training begins, Hammock said she will be counting, in part, on her experiences and knowledge from her time at the Laboratory. "It's hard to think of something that I learned at APL that won't be invaluable during training!" she wrote via e-mail from American Samoa. "More seriously, the experience of working on a close team and cross-department coordination is something I expect to draw on a lot. The technical aspects of the instrument engineering will come in handy when learning about the space station systems and experiments."

"The entire APL community, and particularly the Space Department, is tremendously proud of Christina's accomplishment," said Kurt Lindstrom, Civil Space Business Area Executive at the Laboratory. "We are going to miss her skills and talents, but we know she has the chance to achieve a lifelong dream, and we wish her the best of luck—and look forward to seeing her soar above Earth."

While at APL, Hammock worked for the Space Science Instrumentation Group on several projects. Most of her efforts focused on three particle detector (called the "hockey puck") instruments: the Jupiter Energetic-particle Detector Instrument, or JEDI (on Juno, launched in 2011); the Van Allen Probes' Ion Composition Instrument, or RBSPICE (Van Allen Probes, also built by APL, launched in 2012); and similar devices for the upcoming Magnetospheric Multiscale Mission, or MMS (launching in 2014).

For RBSPICE, "my main role was as the lead engineer of the sensor subsystem that measured the total energy of the particles," Hammock said.

"She was scheduled to rejoin our group in another few months to work for 18 months or so, but it looks like that is not going to happen now," joked the Space Department's Steve Jaskulek, with whom Hammock worked on the detectors. "We are all thrilled that she is going to be able to live her dream, and we are all very proud of her."

Hammock was unable to watch the Aug. 30, 2012, launch of the Van Allen Probes because she was traveling to American Samoa but said, "I watched the news closely and have enjoyed posting all the success stories and discoveries as they happen. Also, before RBSPICE, our team launched [in 2011] a very similar instrument suite called JEDI on the Juno mission to Jupiter. I was able to attend that launch in Florida, and it was an incredible feeling!"

Hammock said that, more than anything else, "APL taught me how to work harder than I ever thought I could. I used to say that I discovered a whole new 'high gear' that I didn't even know I had! APL helped me learn to stay focused and efficient while keeping a sense of humor and having fun—and of course, what to order for delivery when your team is having a late night of problem-solving is key!"

The positive experiences she had at APL will help her as she tackles her toughest challenge to date. "My main memory is how close a team of folks who are working toward the same goal can get, and how lucky I feel to have been a part of that team," Hammock said. "When things weren't going well and we were all in the lab late, brainstorming or putting in long hours preparing for a big review, it made the eventual successes all the more profound and exciting."