When babies are deprived of oxygen before birth, brain damage and disorders such as cerebral palsy can occur. Extended cooling can prevent brain injuries, but this treatment is not always available in developing nations where advanced medical care is scarce. To address this need, Johns Hopkins undergraduates have devised a low-cost, low-tech unit to provide protective cooling in the absence of modern hospital equipment. 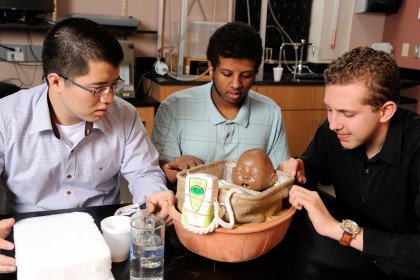 The device, called the Cooling Cure, aims to lower a newborn's temperature by about 6 degrees Fahrenheit for three days, a treatment that has been shown to protect the child from brain damage if administered shortly after a loss of oxygen has occurred. Common causes of this deficiency are knotting of the umbilical cord or a problem with the mother's placenta during a difficult birth. In developing regions, untrained delivery, anemia, and malnutrition during pregnancy can also contribute to oxygen deprivation.

In a recent issue of the journal Medical Devices: Evidence and Research, the biomedical engineering student inventors and their medical advisors reported successful animal testing of the Cooling Cure prototype. The device is made of a clay pot, a plastic-lined burlap basket, sand, instant ice-pack powder, temperature sensors, a microprocessor and two AAA batteries. It is activated by adding water and costs about $40 compared to about $12,000 for modern hospital equipment that accomplishes the same goal, .

The device could help curtail a serious health problem called hypoxic ischemic encephalopathy, which is triggered by oxygen deficiency in the brain. Globally, more than half of the newborns with a severe form of this condition die, and many of the survivors are diagnosed with cerebral palsy or other brain disorders. The problem is particularly acute in impoverished regions where pregnant women do not have easy access to medical specialists or high-tech hospital equipment.

"The students came up with a neat device that's easy for non-medical people to use. It's inexpensive and user-friendly," said Michael V. Johnston, a Johns Hopkins School of Medicine pediatric neurology professor who advised the undergraduate team. Johnston also is chief medical officer and executive vice president of the Kennedy Krieger Institute, an internationally recognized center in Baltimore that helps children and adolescents with disorders of the brain, spinal cord, and musculoskeletal systems.

For the past 25 years, Johnston has studied ways to protect a newborn's brain, including the use of costly hospital cooling units that keep brain cells from dying after an oxygen deficiency. Several years ago, while visiting Egypt, he learned that local doctors were using window fans or chilled water bottles in an inadequate effort to treat oxygen-deprived babies. When he returned to Baltimore, Johnston and Ryan Lee, a pediatric neurologist and postdoctoral fellow at Kennedy Krieger, discussed the problem with Robert Allen, a Johns Hopkins associate research professor in a biomedical engineering program that requires undergraduates to design and build devices to solve pressing medical problems. Allen suggested that Johnston and Lee present the baby-cooling dilemma to biomedical engineering students in the school's Center for Bioengineering Innovation and Design.

The challenge was accepted in 2011 by a team of undergraduates from the School of Engineering. With an eye toward simplicity and low cost, the students designed a cooler made of a clay pot and a plastic-lined basket, separated by a layer of sand and urea-based powder. This powder is the type used in instant cold-packs that help reduce swelling. To activate the baby-cooling unit, water is added to the mixture of sand and powder, causing a chemical reaction that draws heat away from the upper basket, which cradles the child. The chemical would not come into direct contact with the newborn.

Last May, at a student invention showcase organized by the university's Department of Biomedical Engineering, the Cooling Cure team presented its prototype, designed for a full-term newborn weighing up to nine pounds and measuring up to 18 inches in length. The team won the Linda Trinh Memorial Award, which recognized Cooling Cure as an innovative idea for a global health project. In August two of the student inventors were chosen to visit medical centers in India for a two-week trip sponsored by a group called Medical and Educational Perspectives. The group has also offered modest financial support to advance the Cooling Cure design project.

In recent months, three of the Cooling Cure's student inventors—John J. Kim, Nathan Buchbinder, and Simon Ammanual—have opted to move the project forward through animal testing and improvement of the prototype.

"We've tried to continue this because we've gotten such good feedback from people," said Kim of Santa Barbara, Calif., a leader of the student team who completed his undergraduate studies in December. "This is a nonprofit project. The main thing we want to do is to make sure that people in developing countries can benefit from this device."

Working with the Johns Hopkins Technology Transfer staff, the students and their faculty advisors have obtained a provisional patent. In the near future, the student inventors hope to link up with an international medical aid group and begin human clinical trials in a developing region.

Buchbinder, a sophomore from Marlboro, N.J., added, "It's not every day that you get to work on a medical device that could save lives and prevent disabilities in kids."