Film and media studies lecturer Yasinsky pairs six shorts in 'Is This Desire?'

Artist and film and media studies lecturer Karen Yasinsky has been invaluable in screening experimental and avant-garde films in Baltimore in recent years, from curating an evening of hand-made animation to presenting her own hypnotic work. And for Valentine's Day she has put together the Is This Desire? program of experimental shorts for the Charles Theatre's revival series. 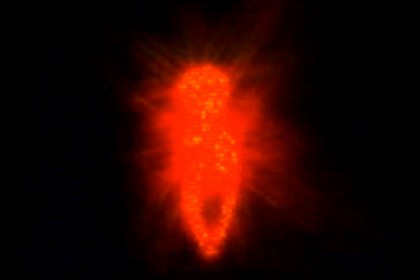 The six-film program pairs four works from contemporary filmmakers—Matthias Mueller's "Pensao Globo" (1997, color, sound), Laida Lertxundi's "The Room Called Heaven" (2012, color, sound), Elad Lassry's "Untitled" (2009, color, silent), and Mary Helena Clark's "Orpheus (outtakes)" (2012, B&W, sound)—with two shorts by artists who sometimes get overlooked for their experimental filmmaking gifts, the only two films in this program this writer has seen. The late Jack Goldstein is better known for the paintings he made during the initial surge of New York's 1980s art boom. Prior to that, the Canada-born, California Institute of the Arts-educated Golstein had spent the better part of the 1970s exploring performance, sound art, and more than 20 short films the remained largely overlooked until they started to be exhibited in the early 2000s. For Desire?, Yasinsky includes his 1978 "The Jump," a 52-second long short of a diver doing flips off a diving board. Goldstein alters the image of the diver until its just a red-orange disco ball sunburst disappearing into a pool of black.

Chilean director Raul Ruiz, who died in 2011, is better known for his grand, often enigmatic, and lush art-house movies, from his Proust adaptation Time Regained to the 2006 biopic Klimt. He left Chile after the 1973 Pinochet coup and settled in France, and for the rest of the decade he made a number of very low-budget shorts, including 1977's "Colloque de chiens" (aka "Dog's Dialogues"), which Yasinsky has included. It's ostensibly a crime film, but it's a surreally ribald version of one. Over a series of still images, a voice-over narrator tells a conventionally thrilling story of murder. The voice over-and-stills storyline is broken up by documentary footage of dogs barking. Sometimes the dog is looking out a window and barking; sometimes the dog is leashed and barking. The result is a wonderfully lurid and absurdist riff on genre fiction's existentialist melodrama.

Is This Desire? screens Feb. 14 at 9 p.m. at the Charles Theatre. Tickets are $9.50; students will be admitted for free with a JHU ID.