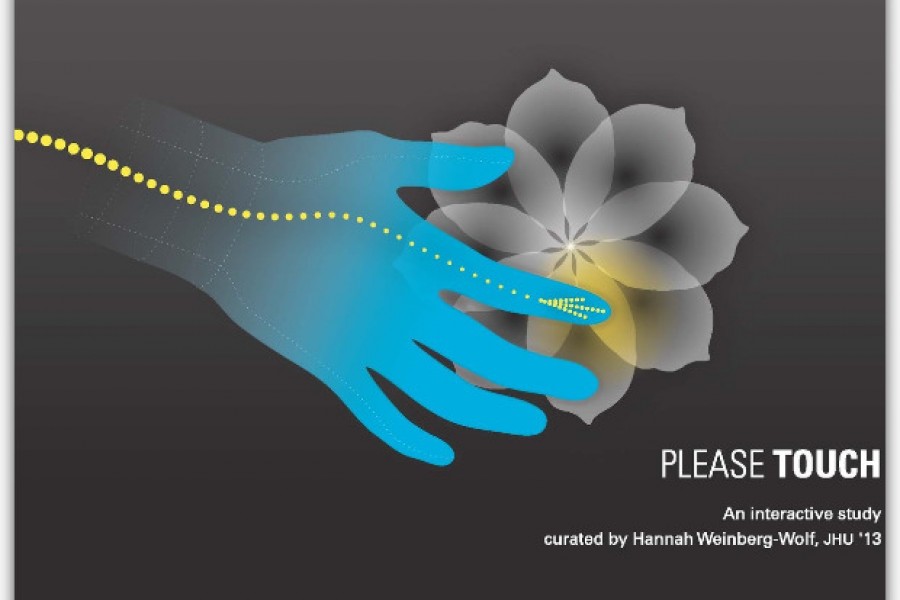 The Program in Museums and Society, Department of Neuroscience, and Sheridan Libraries at The Johns Hopkins University announce the opening of Please Touch: An Interactive Study on the Neurological Mechanisms of Tactile Aesthetics in the quad-level lobby of the Milton S. Eisenhower Library on the Homewood campus. Curated by Hannah Weinberg-Wolf, a senior in the David S. Olton Program in Behavioral Biology, this exhibition introduces visitors to the neuroaesthetics of touch and aims to gather useful data from participants. 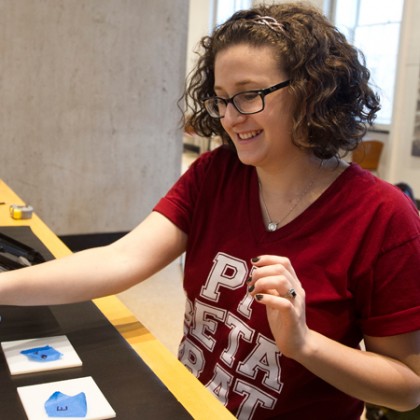 Please Touch is a collaborative effort between the research laboratory of Steven Hsiao, a professor of neuroscience in the Krieger School of Arts and Sciences, and the Program in Museums and Society, an interdisciplinary undergraduate program that teaches students about the history, theory, and practice of the museum world.

"The project was inspired by a 2012 exhibition at the Walters Art Museum," said Elizabeth Rodini, director of the museums and society program. "That exhibition was funded by the Brain Science Institute and was organized by Hsiao and Joaneath Spicer of the Walters. In the current project, we are exploring how to turn the exhibition format into a forum for gathering data: Can we teach visitors while getting them to contribute directly to the scientific research? This is a novel task for an exhibition, which is typically a didactic medium, and we are all eager to see what results."

Visitors to Please Touch are invited to assess two sets of six objects and enter their responses into a digital database. Through scheduled rotations, eight sets of objects will be investigated over the course of the installation. Those interested in participating more extensively in Hsiao's research are invited to follow up with Juan Huang, a post-doctoral fellow working on this project, by sending her an email at hj.jacee@gmail.com.

The past few decades have seen a rapid rise in scientific studies addressing the cognitive and neural underpinnings of aesthetic judgments in humans. One critical question concerns why some sensory inputs are viewed as pleasing or beautiful and how the brain makes those distinctions. Hsiao's lab applies these interests to the sense of touch.

"Most studies of the sense of touch have concentrated on understanding pain, however in life we are generally driven by pleasure-seeking rather than pain-avoidance behaviors," Hsiao said. We are just starting to understand why some objects are more aesthetically pleasing to touch and what are the neural mechanisms that underlie tactile aesthetics."

The key to this unique campus collaboration was Weinberg-Wolf, who found in the project a chance to bridge her interest in biology and in museum curation. "I believe that the museum is one of the most powerful tools scientists have to educate the public," Weinberg-Wolf said. "This exhibition allowed me to combine my various academic experiences into one project. The chance to conduct scientific research and teach the public about that science has been extremely rewarding." Her installation was supported by The Richard Kagan Undergraduate Research Award in Museums and Society, 2012, funded by the Dean's Undergraduate Research Award.