A summit of more than 20 of the world's leading gun policy experts has identified several research-based policies to reduce gun violence in the United States. The policy recommendations were the result of a two-day Summit on gun violence convened by The Johns Hopkins University on January 14 and 15, The Summit on Reducing Gun Violence in America: Informing Policy with Evidence and Analysis.

During the Summit, experts presented and analyzed research-based approaches to reducing gun violence. Collectively, the Summit participants recommend* the following:

Fix the background check system by:

Prohibiting High-Risk Individuals from Purchasing Guns: Expand the conditions for firearm purchase to include:

"The purpose of putting forth these recommendations is to provide a research-based framework for reducing the staggering toll of gun violence in America," said Summit organizer Daniel Webster, ScD, MPH, director of the Center for Gun Policy and Research at the Johns Hopkins Bloomberg School of Public Health. "Importantly, most recommended policies have broad public support and would not violate constitutional rights."

New national public opinion polling data presented during the Summit from Johns Hopkins researchers showed the majority of Americans—including gun owners—support a universal background check system, more oversight on gun dealers, restricting access to guns among high-risk individuals such as those with previous criminal convictions, and banning the sale of large-capacity ammunition clips or magazines that allow some guns to shoot more than 20 bullets.

"This has been an important two days," said Ronald J. Daniels, president of The Johns Hopkins University. "We knew that a critical outcome of this Summit would be a set of research-based recommendations designed to inform the current debate. These will help lawmakers and opinion leaders identify the policy changes that are most likely to reduce gun violence in the United States."

Last month's shootings in Newtown, Conn., opened the door to new federal action to reduce gun violence in the United States. Johns Hopkins University's Center for Gun Policy and Research believes that any action should be based on the best available research.

"The research-informed measures address not only mass shootings but also the less publicized U.S. gun violence that takes an average of 30 lives every day," said Summit organizer Jon Vernick, JD, MPH, co-director of the Center for Gun Policy and Research at the Johns Hopkins Bloomberg School of Public Health. "We can reduce this number through implementation of such measures as expanding conditions which would prohibit high-risk individuals from possessing guns, strengthening the background check system by covering all firearm sales, and ensuring that necessary records for prohibited individuals are available."

The Summit convened by the University, its Bloomberg School of Public Health and the Center for Gun Policy and Research is believed to be the most extensive summit meeting ever of gun policy researchers to discuss the evidence and make specific action recommendations.

"Gun violence is an urgent public health problem facing our country. I'm proud of our faculty for their contributions to the prevention of gun violence and for their leadership in this important summit," said Michael J. Klag, dean of the Johns Hopkins Bloomberg School of Public Health. "Efforts like this Summit showcase what we do best, providing the science and evidence to solve the major challenges to our health."

According to the Centers for Disease Control and Prevention, guns kill more than 31,000 people each year in the U.S., including more than 11,000 homicides. The U.S. homicide rate is seven times the average of other high-income countries.

Within weeks of the Summit, the Johns Hopkins University Press will publish the book, Reducing Gun Violence in America: Informing Policy with Evidence and Analysis. Collected for the first time in one volume, this reliable, empirical research and legal analysis will inform the policy debate by helping lawmakers and opinion leaders identify the policy changes that are most likely to reduce gun violence in the U.S. The book will be available in late January. Copies of the book will be delivered to policymakers from across the country, including members of Congress and the Administration.

For additional information about the book and the Summit, visit http://www.jhsph.edu/gunpolicysummit.

* These recommendations represent the consensus of the experts presenting at the Johns Hopkins Gun Policy Summit. However, it may not be the case that every expert endorsed every specific recommendation. 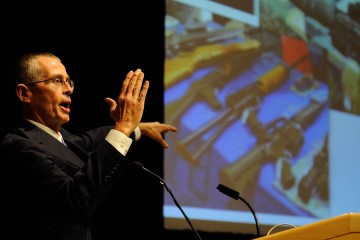