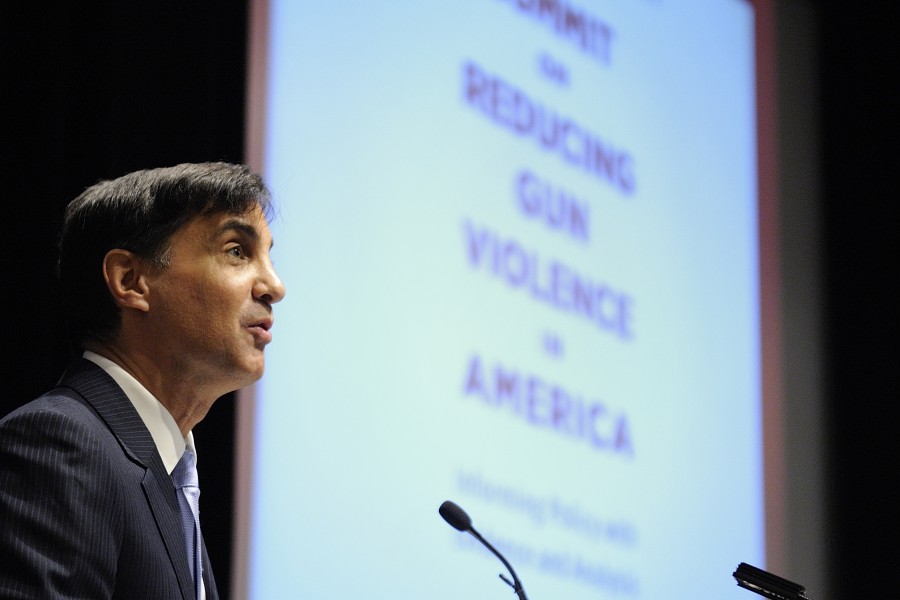 With the nation and its leaders embroiled in the conversation over guns and gun policy, Johns Hopkins has just provided much food for thought—and action.

One month to the day after the Sandy Hook Elementary School massacre, global experts on gun policy gathered at the Johns Hopkins Bloomberg School of Public Health to present the latest research and thinking on gun violence in the U.S., and to develop consensus recommendations to help inform policy.

President Ronald J. Daniels opened the two-day Summit on Reducing Gun Violence in America, conceived just three weeks ago, with a moment of silence to remember the victims of Newtown, Aurora, Blacksburg, and other mass shootings, and those gunned down in the nation's cities and towns daily.

"Our work over the next two days will focus on the wrenching and pernicious effects of gun violence in America, violence that has ravaged far too many families, schools, and workplaces, places of prayer, and neighborhoods and communities that dot and define our landscape," Daniels said.

Daniels lauded the work of those who organized the summit so quickly and spent "every waking moment" dedicated to its success.

"The importance of this summit cannot be overstated," he said. "Because our conversations over the next two days will take place against the backdrop of a bleak record of stunted policy reform in this area, it is tempting to regard this summit as one more exercise in futility. Essentially, the skeptics fear that a good idea for gun policy reform is no match for the formidable interests that oppose gun legislation, that this is so even after an event as cataclysmic as Newtown. Yet today, I urge a more optimistic view that is predicated on the belief that we are not slavishly tethered to the current matrix of inadequate national gun laws."

Johns Hopkins wanted to seize on this moment in time, when gun-related issues were high in the public consciousness and the White House has sworn swift action to gun policy reforms. The conference was held just days before Vice President Joe Biden would present a set of recommendations on gun reform to President Barack Obama.

Gov. O'Malley used the summit as an opportunity to outline a comprehensive legislative package aimed at reducing gun violence, which he plans to introduce this week. The three-pronged strategy will focus on gun safety, school safety, and mental health, including a ban on military assault weapons, cameras at school entrances, stricter licensing requirements, and improved data-sharing practices between federal and state officials.

Bloomberg, co-chair of the Mayors Against Illegal Guns, gave an impassioned plea for a common sense approach to reducing gun violence. He called on President Obama and Congress to enact federal gun control reforms, outlining a seven-point proposal that includes mandatory background checks on all gun sales, tougher penalties on gun trafficking, and limits on military-style assault weapons.

"These guns and equipment are not designed for sport or home defense; they are designed to kill large numbers of people quickly," he said. "That is the only purpose they have. They belong on the battlefield, in the hands of our brave, professionally trained solider, not on the streets of our cities, suburbs, or rural areas."

Guns kill, on average, 31,000 Americans each year, according to the Centers for Disease Control and Prevention. To address this urgent public health problem, the experts analyzed the latest research to present clear, comprehensive recommendations for gun policies that will reduce gun violence, and also have broad public support and not violate constitutional rights.

Day one focused on flaws in the current gun laws and policies, and proposals to keep guns from high-risk individuals such as domestic violence offenders, mentally ill, and the criminal element.

Harvard's Matthew Miller detailed the extent of the nation's gun epidemic. In 2010, the latest available statistics, 19,000 Americans died from gun-related suicides and almost as many Americans died from gunfire as motor vehicle crashes. For those under 40, more die from gunfire than any specific disease. The U.S. homicide rate is seven times the average of other high-income countries.

"Compared to other developed counties, the U.S. has a uniquely huge firearm problem," Miller said.

Daniel Webster, director of the Bloomberg School's Center for Gun Policy and Research and the moderator of the event, discussed the need for expanding prohibitions on firearm sales, which could include raising the minimum legal age of handgun possession from 18 to 21, and prohibiting sales to those with [documented] drug and alcohol dependencies. Homicide offences go up during the teen years, Webster said, and peak between the ages 18 and 20, and then drop as people get older. Alcohol and drugs, he said, also play a substantial role in many cases of violence. "If we can keep guns out of the hands of such abusers, I think we can save a lot of lives," he said. "We have to really reconsider how well our prohibitions are doing in identifying the highest-risk individuals."

Building upon Webster, Garen Wintemute, director of the Violence Prevention Research Program at the University of California, Davis, says there is much evidence that those with misdemeanor violence arrests can move onto gun violence and that denial criteria should be expanded to those who fall into this category.

The agenda for day two switched the view overseas, looking at case studies of responses to gun violence in places such as Australia, Brazil, and Scotland, where stricter gun policies have proved effective, to varying degrees, in reducing violence. Day two also included the release of a recent public opinion poll, conducted by the School of Public Health, on American's views on 33 specific proposed gun policies aimed at reducing gun violence. The findings identified clear support for the majority of the proposals, with 20 policies strongly supported regardless of respondents' political affiliation and whether they own a gun.

The summit participants unveiled a set of recommendations Tuesday afternoon aimed at reducing gun violence. The recommendations fall under eight categories and notably include universal background checks on all gun sales, the expansion of conditions for firearm purchase to prohibit high-risk individuals from obtaining guns, ban on the future sale of assault weapons and high-capacity magazines, and increased federal support to enforce laws, such as finding a permanent director for ATF and increasing funding and resources to the bureau.

Many of these recommendations were present in the series of proposals announced by President Obama on Wednesday afternoon at the White House, which included 23 executive actions and comprehensive legislation that needs to be passed by Congress. Webster and others from the School of Public Health had met last week with members of Vice President Biden's task force on gun violence.

Within the next two weeks, Johns Hopkins University Press will publish a book, Reducing Gun Violence in America: Informing Policy with Evidence and Analysis, that compiles all the findings and views presented at the summit. The book will be edited by Daniel Webster and Jon Vernick, both with the Center for Gun Policy and Research at the Bloomberg School.

The authors plan on getting copies to each and every member of Congress as soon as possible.

In his closing remarks, Webster expressed great optimism about what comes next.

"I'm confident this summit is going to change things as we move forward to address gun violence," he said.