When Judah Adashi started the Evolution Contemporary Music Series in 2005, Baltimore hadn't yet accrued the reputation for new music that it now boasts. Marin Alsop and her fresh ideas about repertoire and audience engagement wouldn't arrive at the Baltimore Symphony Orchestra until 2007, serendipitously about the same time that the Mobtown Modern series, currently on hiatus, would launch as well. Adashi wanted to focus entirely on living composers—or "the undead," he jokes—and while classical performers and composers were starting to take their music out of the concert hall and into galleries, bars, and other atypical venues in New York and around the country, the growing movement hadn't quite taken a foothold in Baltimore. Musicians started Classical Revolution in San Francisco in 2006, but a chapter didn't start in Baltimore until 2011. 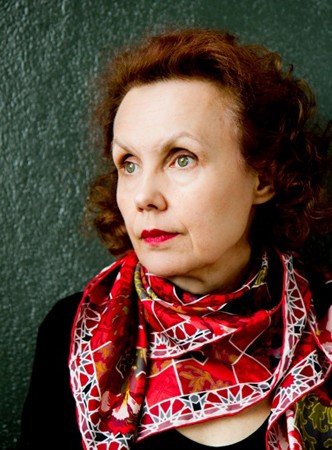 Image caption: The music of Finnish composer Kaija Saariaho is featured in the the opening concert of the 2012-13 season of the Evolution COntemporary Music Series.

Today Adashi is a composer, having earned his MA and PhD from the Peabody Institute, where he studied with the late Nicholas Maw. He's also a composition faculty member at the Peabody Preparatory and director of the Junior Bach outreach program, and in many ways his concert series is an extension of his role as educator and new-music advocate. Its 2012-13 season kicks off tonight with an 8 p.m. concert spotlighting the music of Finnish composer Kaija Saariaho at An die Musik.

"My perception as a composer and a teacher is that when people think of contemporary music most of them are thinking of music that ranges from 1920 to 1960," Adashi says during an afternoon conversation at the Peabody bookstore caf&eacute;. "That is 'new' music, which is a very funny idea. It's 50 years old. And not only is it 50 years old, but it's often of one particular cast. In other words, it's part of the flowering of the avant-garde in Europe and America."

Over the past decade, thanks in large part to grass-roots efforts made by musicians and composers such as Adashi, 20th-century avant-garde music, what was once called the "new music," is getting played and heard more often. "I think the music from [Arnold] Schoenberg to George Crumb is getting performed more," Adashi says. "I don't think that music is having to fight for its identity much. So to me the next step is what about the music that's being written now? Because it's good, people don't know it well enough, and because some people may like it even better than that stuff. It can be complex and avant-garde. It can be minimalist. It can fit into no category whatsoever. Contemporary music, it's fairly pluralistic, and hopefully welcoming. And I think that's liberating for listeners."

Evolution Contemporary's 2012-13 season opener was postponed by Superstorm Sandy, so tonight's Saariaho event is a late start to its year. But it's a great introduction to its impressive season. Adashi curated this season as a series of composer spotlights, like solo gallery exhibitions for composers. In February the series features the works of Hungarian composer György Kurtág. The season finishes in March and May with a pair of powerhouses: rising star Missy Mazzoli (March 5) and John Luther Adams (May 7). Both composers will be coming to town to discuss their work.

It's exciting not just because modern classical stars are coming to town, but because the music they make can resonate with audiences willing to listen.

"Classical music is people writing about and engaging with the issues of their time and the sound world you know," Adashi says. "Getting people to hear that is part of our commitment to building a community around contemporary music. And as it is with most music making, that's a commitment to excellence and really good music. Let's play good music and have the best performers doing it."