He has authored several collections, most recently 2010's 'Entrepôt' 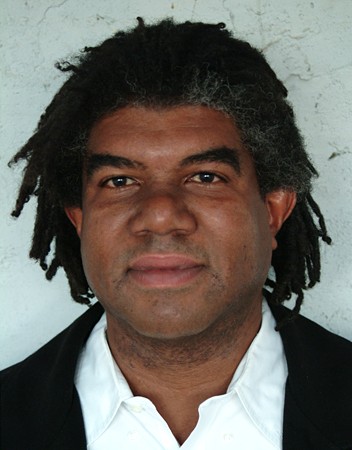 Jamaica-born poet and critic Mark McMorris had already published a few chapbooks and his debut poetry collection when his The Blaze of Poui appeared in 2003, but that arresting collection revealed new depths to his gifts. Blaze is an exploration of African and European cultures and bodies colliding in the New World, which Morris articulates by weaving together literary experimentation and critical examinations of colonialism in beautiful language that veers from the vernacular to the classical.

This sort of verbal and political dazzle has become more subtly potent in his work, such as in his 2010 collection Entrepôt. Here McMorris confronts the courses of empire obliquely, through a series of epistolary verses wherein the letters' author discusses writing and warfare, blurring the boundaries between poet and soldier. It's an approach than compresses the personal into the political, so that when he does address our recent era of seemingly constant war, he can hauntingly push the ordinary into the unbearable:

"And so the vehicles came from the driveways in the suburbs / on television the Budweiser cart brought kegs to a tavern / a game was decided in the final seconds, and the war— / the war was pictures and absence, and folks ran up flags / over the middle country, the coats and the South, bewildered / and yet relieved to see all that power, that certainty of might." (untitled poem, Entrepôt, p. 16)

Tonight McMorris, an associate professor of English at Georgetown University, comes to the Johns Hopkins University Humanities Center for a poetry reading at 6:30 p.m. in 208 Gilman.