Researchers seek better ways to harness the power of wind 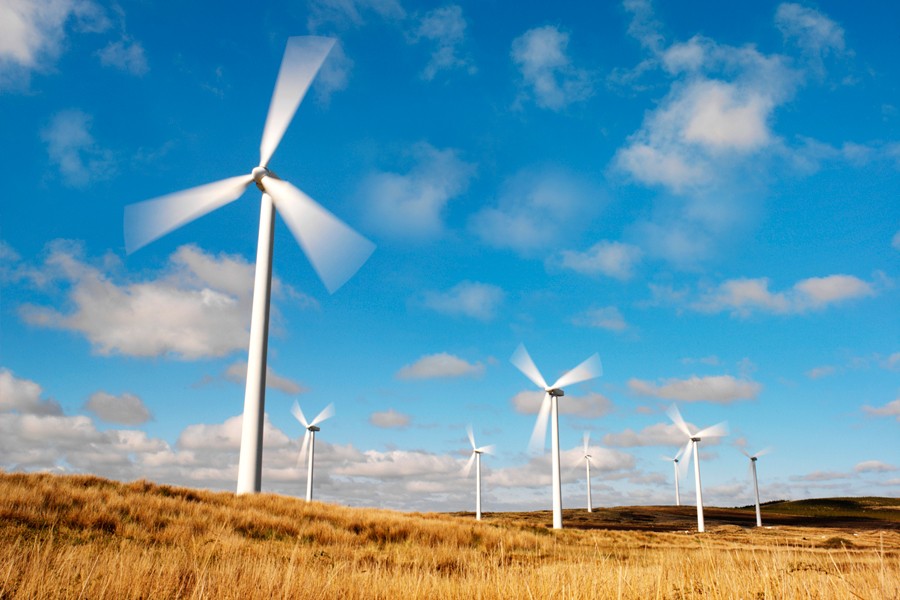 Wind farms are a fast-growing source of "clean and green" power, but a key problem remains: the wind behaves erratically. On any given day, the air outdoors may move in powerful gusts or gentle breezes—or may not move at all. This leads to an uneven output from wind farms and makes it more difficult for alternative energy producers to work smoothly with power grids that must send a steady flow of electricity to homes and businesses.

To address these challenges, the National Science Foundation has awarded two grants totaling $6 million to Johns Hopkins researchers and their collaborators. Johns Hopkins engineers will lead multi-institution teams in devising better ways to design and manage large-scale harvesting of intermittent power from the wind and other renewable energy sources.

"Wind power is one of the most cost-effective ways to produce electricity that doesn't require nonrenewable, polluting fuels like oil and coal," said Charles Meneveau, a Johns Hopkins mechanical engineering professor who is lead researcher on one of the NSF grants, valued at $4.3 million. "Using advanced computer simulation tools, we plan to develop more efficient wind farm designs and better methods of moving clean, renewable power into a community's power grid."

Meneveau, whose computer simulations of air flow in large wind farms help identify optimal sites and spacing for wind turbines, said this first grant will support the U.S. researchers who are part of an international partnership involving more than 20 academic scholars and professional researchers in the United States and Europe. The team will investigate not only the interplay between wind, weather conditions and wind farm output, but also the impact that individual turbines have on other turbines located near them. Students and postdoctoral fellows at the participating institutions will help conduct the studies and participate in international exchange visits to develop their skills on the global stage.

The multinational team's grant application was submitted by Johns Hopkins' Environment, Energy, Sustainability and Health Institute (E&sup2;SHI), which was launched to promote interdisciplinary research and teaching that seeks to understand how people affect the environment and how the environment in turn affects our health, and to develop renewable energy and other sustainable technologies.

Benjamin Hobbs, a professor of geography and environmental engineering who directs the institute, said the participation of wind energy experts from Denmark, the Netherlands, Switzerland, Belgium and Spain is crucial. "There's so much we can learn from our European colleagues," Hobbs said. "In many ways, they are ahead of us in the generating of power from the wind. But we hope there are things they can learn from us, too."

Hobbs' expertise is in energy-related economics and public policy. He will focus on topics such as policy issues related to the siting of renewable power projects and the use of economic incentives to promote further construction of such systems. The lessons of the project will directly help power grids worldwide to include a significant penetration of renewable power within the next few decades. In the U.S. alone, 38 states have set ambitious goals for the percentage of electricity coming from renewable and alternative sources, and the U.S. Department of Energy has set a goal of 20 percent wind by 2020.

U.S. schools participating with Johns Hopkins in the wind farm research are Texas Tech University, Smith College, and the University of Puerto Rico. European partners include the Danish Technical University and Ris&oslash; Laboratory in Denmark, the Energy Research Center of the Netherlands, &Eacute;cole Polytechnique F&eacute;d&eacute;rale de Lausanne in Switzerland, Katholieke U. Leuven in Belgium, and Comillas Pontifical U. in Spain. Funding was provided by NSF's Office of International Science and Engineering through its PIRE (Partnerships for International Research and Education) program.

The second NSF grant received by Johns Hopkins and its partner institutions, totaling $1.7 million, focuses on developing methods to improve the way a power grid responds to the intermittent flow of energy produced by wind and solar cells. "When the wind stops blowing or clouds pass over a solar array, the flow of electricity from these renewable sources suddenly drops off, and the power grid must be able to adjust," said lead investigator Dennice Gayme, an assistant professor of mechanical engineering with expertise in power grid modeling and analysis.

Power companies sometimes make up for this missing energy by switching on "peaker" generating units that use gas turbines or jet engines to produce electricity on a short-term basis. But Gayme said such units are expensive and use polluting, nonrenewable fossil fuels. She added that wind's variability makes it more difficult for the grid to meet consumers' demands and affects its ability to return to a regular operating condition after a sudden disturbance, such as a change in wind output or equipment breakdown. Her new grant will allow researchers from Johns Hopkins, North Carolina State University, and Smith College, to study other ways to maintain both the flow of electricity and stability in a power grid that is connected to cleaner but intermittent power sources.

The team members will take a holistic view of the problem by tying models of wind farm power output to power grid stability, grid management and energy markets. They will investigate both market incentives, such as offering lower electric rates during off-peak demand hours, and technology-based approaches to help balance usage. For example, the researchers will evaluate technologies that can store excess wind and solar energy for use later, when production from these sources slows.

"We want to come up with tools and strategies that can help maintain the stability of our power grid and help speed up the transformation to a safe, reliable and efficient system that's no longer based on nonrenewable fossil fuels," Gayme said. Like the other wind farm study supervised by Meneveau, the power networks program led by Gayme will have student research opportunities and collaborations with K-12 educators. Gayme's grant was provided through the NSF's Sustainable Energy Pathways program.