Diagnosing fever by a thread 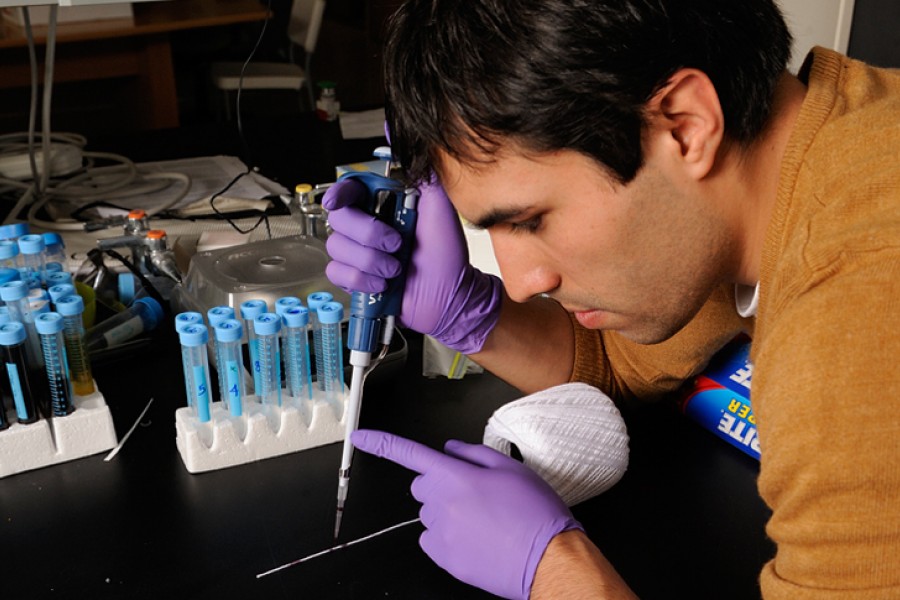 The bag slung over the shoulder of a health care worker in a developing nation carries a heavy burden. It must contain supplies to care for the sick and injured in places where the distance to a hospital prevents many from receiving the care they need.

A team of Johns Hopkins graduate students seeks to lighten this load by developing a simple self-test that could easily and accurately diagnose the underlying cause of fever, a common symptom of malaria, bacterial pneumonia and other infections. The potentially lifesaving device is lightweight and relies on just a single strand of cotton and a drop of blood.

"What makes this all work is a piece of thread," says Omid Akhavan, a graduate student at the Johns Hopkins Center for Bioengineering Innovation and Design, in the Department of Biomedical Engineering.

The thread has natural microfluidic properties that draw the blood through the testing agents, and it produces a diagnosis in about five minutes.

"The future of medical device innovation is taking ordinary things and creating something lifesaving," Akhavan says. "There had been some research done on thread as a microfluidic channel, and we found a way to take it to the next level."

The product, called FeverPoint, relies on the same basic science as an over-the-counter pregnancy test. A patient pricks his finger—as a diabetic would to test insulin levels—and places a drop of blood on one end of the strip. The fluid from the blood moves along the thread, passing targeted biomarkers that indicate if an infection is present and whether it's viral, bacterial or malarial.

The test holds promise for developing countries because it does not require electricity, water or sample preparation, and it's low-cost, estimated at just three cents per test. Similar tests exist, the team says, but some require plasma to be separated from blood cells before testing; others use much larger, pricier technology. FeverPoint is more efficient and less expensive because it accepts a whole-blood sample and uses just one thread.

Malaria and bacterial pneumonia claim the lives of nearly 3 million children under the age of 5 each year, according to a 2010 study funded by the World Health Organization. Many of these deaths could be prevented if health care workers had the tools necessary to quickly and accurately diagnose the cause of fever and prescribe the correct medicine, the team says.

"The great thing about this technology is that it can serve as a platform to feasibly tackle and diagnose many illnesses," team member Luccie Wo says. "Our product is specifically targeting fever, but it can be applied to any number of other diseases."

The FeverPoint team, which includes five graduate CBID students and two collaborators from the Johns Hopkins School of Medicine, presented its project on May 7 at the Biomedical Engineering Design Day. Other global health projects include a low-cost fetal heart rate monitor, a medical device to treat postpartum hemorrhage and a new tool for treating cervical cancer.