A Johns Hopkins University senior and her faculty advisor, actor and theater arts professor John Astin, are offering the community the chance to see something unusual: a one-night only performance of an ancient Sanskrit form of theater known as Kudiyattam. 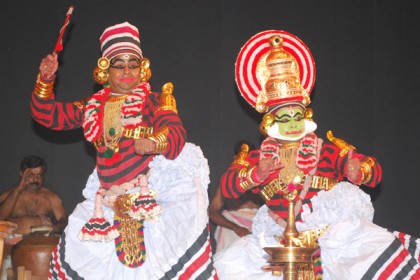 The South Indian group Natanakairali will perform at 7 p.m. on Sept. 6 in Shriver Hall Auditorium on the university's Homewood campus. This free performance is one of just two stops the troupe is making in the United States.

Devika Bhise, the student organizing the show as part of a university-funded undergraduate research project, said that only a handful of troupes continue to perform Kudiyattam, which dates back to somewhere between the 2nd century BCE and 1st century CE in the state of Kerala in India. Kudiyattam means "combined acting" and is the oldest surviving tradition of theater in the world, Bhise said. There are very strict stipulations about who is allowed to study Kudiyattam and where or how they are allowed to perform, which she said has greatly hindered the expansion of the art form. In 2001, the United Nations Educational, Scientific and Cultural Organization declared Kudiyattam one of its "Masterpieces of the Oral and Intangible Heritage of Humanity," to be protected and preserved.

Bhise is conducting her research as one of Johns Hopkins University's Woodrow Wilson fellows, who receive awards of up to $10,000 over four years. The program allows undergraduates the opportunity to pursue an independent research project over the course of their college careers. With Astin as her mentor, she is comparing Kudiyattam with modern or contemporary theater in the West. She is also examining how the universal intention of theater serves as a common ground for two seemingly contrasting styles of art.

During its performance on Sept. 6, Natanakairali will perform The Abandonment of Sita, the little-known story of Sita's fate after she was rescued from the demon Ravana, according to the website for the Asia Society in New York, where the troupe will perform on Sept. 8. To secure a ticket for the performance at Johns Hopkins, send an email to kudiyattambaltimore@gmail.com.