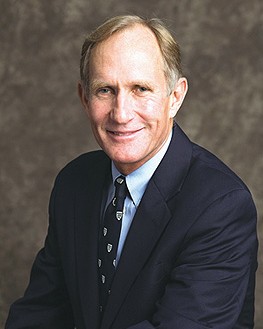 Peter Agre, director of the Malaria Research Institute and co-recipient of the 2003 Nobel Prize in chemistry, is quick to give others much of the credit for his success. "It's the people I met along the way that really had major effects upon the pathway—and also the luck of discovery," he says modestly. "If I had any advice to give a young person who wants to make a discovery, it's, 'Be around people who are supportive, patient, and innovative because they'll bring you to their level.' Hopkins has a lot of people like that."

As with most innovators, this self-effacing Minnesotan made a few unusual but fortuitous career choices. In his very first medical school lecture, he learned that reverse transcription of RNA back into DNA was going to create a "revolution in molecular biology, molecular genetics." His clinical and postdoctoral training, however, were in non-DNA labs. "It dawned on me," he says, "that the handwriting was on the wall. I was going to be able to pursue things for a couple more years, five at most—and then become obsolete."

He decided he needed experience in a "good lab with current DNA technology." As a new Hopkins faculty member, he requested a sabbatical from his department chairman, and "his jaw dropped." They reached a compromise, and a chance meeting at his daughter's school ice cream social led to a "most pivotal year" at the Carnegie Institution, "a world leader in DNA technology" on the Homewood campus.

"When I told my hematology colleagues that I was going to Carnegie, they thought I meant Carnegie Mellon," he laughs. "They thought I was in Pittsburgh, when I was just riding my bicycle over to Homewood every day. Left alone for a few months, I found that everything worked out great."

After researching cholera while a Hopkins medical student and after isolating the e coli toxin that caused a variant of cholera, Agre felt those issues were largely resolved. "But a lot of problems of red cells were still wide open," he says. He obtained an NIH grant to study red cell membranes, and it led to his breakthrough discovery.

"We were looking for the molecular basis of the Rhesus blood group antigen, Rh antigen being very famous," he says, referring to the role it plays in maternal-fetal incompatibilities. "Back in the 1980s, when we were at work on this in the lab, the molecular structure of Rh was still obscure. Is it a protein? Is it a lipid? Is it a carbohydrate?"

In "a significant advance in hemalogic research," his lab purified the Rh antigen for the first time. "But along for the ride," he says, "came a small contaminating molecule, almost the same size as the Rh, which we thought was a breakdown product—but it behaved a little differently. It turned out to be a contaminant with interesting properties."

With a detective's instinct, Agre couldn't resist taking a closer look. "I honestly think a wiser and more focused investigator would have stayed right on that NIH-funded plan," he confesses. "I just felt curious." He decided to pursue the mystery.

"Every time we did an experiment, something more interesting emerged," he remembers. "This contaminating molecule had sequence similarity to a small group of proteins spread throughout nature, functionally undefined, something in the membranes of cells and the lens of the eye and the brains of insects and roots and tissues of plants. What could it be?"

Even after they had solved the molecule's entire sequence, they did not understand its purpose. "I talked to dozens and dozens of scientists about this new protein," Agre says, suggesting it might be a channel protein for red cells. "I was assured by all the experts that red cells didn't have channels so it must be something else."

"This," he says, "is where good luck and human contact provided the answer." On the way back to Baltimore from a family camping vacation in Florida, he stopped to see his colleague John Parker, a hematologist at the University of North Carolina. Agre told him what he had learned and described places the molecule had been found. Parker leaned forward and said, "You know, these are the most water permeable tissues known to nature. For a hundred years, physiologists have been seeking something they thought might exist, a water selective channel. This could be it." He suggested teaming up with Hopkins physiologist Bill Guggino for further exploration.

Back at Hopkins, Agre, Guggino, Greg Preston, and fellow researchers set to work. They decided to try an experiment using frog eggs, which are water impermeable and dormant unless they're fertilized. Six control oocytes, about a millimeter in diameter, were unchanged in distilled water. But when the six test oocytes injected with RNA were transferred, "bang, bang, bang, bang—like popcorn," Agre recalls, "they all exploded by osmosis, so we knew we had it in the first experiment.... It was a lot of fun." They had found the elusive channels, or "water pores," through cell membranes and dubbed them aquaporins.

Again, Agre gives credit to others. "All of those people I mentioned were involved in the genius behind it," he says. "I just happened to be the lucky guy who was their friend."

The results were published in Science in 1992, and Agre was awarded the Nobel Prize in 2003—an eye blink in scientific terms. Predictably, other researchers claimed to have discovered aquaporins first. Unruffled, Agre simply replied that disappointment is unfortunately not rare in science. Harder to handle than competing claims was the rush of publicity that his "fairly quiet, anonymous lab" received. "I was not ready for that," he says.

He is clear, however, about how his discovery should be applied. He quotes his mother: "Nobel Prizes are nice, but do something useful."

Before medical school, Agre had traveled to South and Southeast Asia, getting a close look at Third World diseases, thinking that after medical training, he would help "the poorest of the poor." It was a "very heady and very optimistic" notion, he recalls, but it "also sounded exciting to me." Now he has come full circle, applying his years of accumulated knowledge and prestige to solving the scourge of malaria, which kills more than a million people each year, many of them children.

A large portion of the malaria parasite's life cycle occurs in red blood cells, so Agre is investigating whether aquaporins could be used to disrupt this life cycle. Aquaporins also promote understanding of water transport in skeletal muscle, lungs, kidneys, and other organs and may help resolve fluid retention related to heart disease. Drugs may be developed to target water channel defects, and Agre foresees applications in biotechnology and agriculture.

Agre won't predict what his next chapter may hold, but along with most world-class scientists, he envisions intriguing possibilities ahead. Noting how difficult it was to catch aquaporins in action, he muses, "That makes me think there's a lot of biology out there that we still can't see." As new generations of young researchers enter his orbit—"allowing them to fulfill potential that maybe they didn't themselves recognize"—there are even more collaborators to work on the next discovery. Agre will readily share the credit.