Noah Cowan is taking an innovative approach to improving robotics, studying how animals process sensory information and turn it into motor commands for their muscles 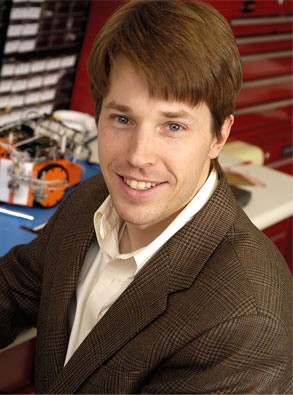 Image caption: Noah Cowan, an associate professor in the Department of Mechanical Engineering, studies animal movement and how it might be applied to robotics.

Noah Cowan learned to juggle in seventh grade. The director of the Locomotion in Mechanical & Biological Systems (LIMBS) lab didn't know then, while he was analyzing the myriad ways to flip a household hammer, that his life's work would involve attempting to understand and solve the riddles of motion.

What Cowan does, distilled to a cocktail-party introduction, is study—through experiments, theoretical modeling, and other means—how animals process sensory information and turn it into motor commands for their muscles.

An associate professor of mechanical engineering, Cowan calls himself "a frustrated roboticist," explaining that he is both frustrated and fascinated by how animals move. "We have no idea how to synthesize machines that are anywhere near as good as animals. Over the last few years, I've switched my focus to one of just trying to understand. I want to know, even if I will never personally be the one to translate any of that information back to robotics." Just like he wanted to know why the hammer flips a certain way.

Cowan doesn't see motions—a spider's trail or a snake's slither—as impossible; it's just another thing he "can't wait to understand." When you start paying attention, really paying attention, to how animals move, each day holds wonder. "I walked outside this morning and startled a squirrel. It shot across my yard, zipped up a fence, jumped up onto a telephone wire, ran across, leaped over onto a tree. How on earth does it do all that?" he asks. "It does it in a tiny little package with little feet. Everything matters!"

Cowan's focus, in a nutshell, is the understanding of how those little feet—muscles, and sensors, and processors of all this information, in short, the entirety of this complicated system—work together. In the LIMBS lab, he and his students study the movements of cockroaches and weakly electric knife-fish. "I'm just deeply driven by a sense of curiosity," he says. "I want to know what's in front of me right now and why that is working."

His Ph.D. adviser once warned him, "You bang your head against the wall until it breaks, but the thing you have to realize is that it doesn't usually break where you're banging your head. It breaks somewhere else." So it's perhaps surprising that what Cowan experiences as a limitation—"that I can't get a problem out of my head when I don't understand it"—is the very thing that fuels innovation, where so often the hardest work is the ad nauseum exhaustion of possibilities. "It's not something that I force myself to do," he says of his relentless focus on problems. "It's something that I can't force myself not to do."

But why should anyone care about what a frustrated roboticist finds personally intriguing, sometimes to the point of obsession? Often, Cowan suggests, it's the depth of knowledge in one particular area that leads to innovation, in his case highlighting the recognition "that understanding the way brains process information to control movement is of paramount importance to human health." He discusses the work of Amy Bastian at Kennedy Krieger who studies how different brain injuries or diseases can change people's ability to adapt their walking.

Humans, he says, are important to study since we so often are the ultimate targets of investigation. But we can glean valuable insight from discovering analogous behaviors in animals. "Understanding fish locomotion control...is such a basic neurobiological question that if we can unlock some of the problems associated with that, it'll ultimately, hopefully, lead to big changes in our understanding of human motor disease." And from such basic insights often arise intriguing corollaries: "Wouldn't it be great if we could build machines that would work better with people to solve certain kinds of problems?"

A recent recipient of the prestigious Presidential Early Career Award for Scientists and Engineers, Cowan says his success stems from "the willingness to take risks where you could just fail miserably." Risk of failure is built into doing truly innovative research, but he insists that embracing such risks is essential to our greater understanding of the universe. And you never know when you're going to be the one to develop the core of future microprocessors or a drop-free juggling machine. Innovation has to start with the fundamentals. "It's good to remember that ten other projects failed for one to succeed, but that one created a new industry, right? I think we should remind people of that process: that the risk you have to take up-front has a long-term benefit for our future."