He shares honor for his leading role in dark energy research

In a day chock-full of metaphors used to explain universe-sized science, Adam Riess employed a simple image to convey to his 7-year-old daughter the life-altering award he had just won. What does winning the Nobel Prize for physics mean? It's like getting a "great big gold sticker" on your school folder, he told her.

Make that a star-shaped sticker.

On Tuesday, the Royal Swedish Academy of Sciences recognized Riess, the Krieger-Eisenhower Professor in Physics and Astronomy at Johns Hopkins and a scientist at the Space Telescope Science Institute, for his leadership in the High-z Team's 1998 discovery that the expansion rate of the universe is accelerating, a phenomenon widely attributed to a mysterious, unexplained "dark energy" filling the universe.

For one day, at least, Riess' world was certainly accelerating. The big bang started at 5:36 a.m., when Riess received the call from Sweden. Riess' 10-month-old son had already awakened him, and he thought it was the middle of the night.

"But when I saw the time on my digital clock, I thought this was THE call," Riess said during a press conference held later that afternoon in Mason Hall on the university's Homewood campus. "That time is famous [for when the Academy calls]. And then these voices, many of them, told me that this was the Nobel Prize committee, and it was important."

After an immediate call to his mother and some friends and colleagues to share the news, Riess left for his big day on campus. When he arrived, his tie still in hand, Riess was greeted by a group of reporters and photographers. A bottle of champagne awaited him in his office in the Bloomberg Center for Physics and Astronomy, ready for the first of many toasts throughout the day.

Riess, 41, shares this year's prize with High-z teammate Brian Schmidt, of the Australian National University, and Saul Perlmutter, an astrophysicist at the University of California, Berkeley and the Lawrence Berkeley Laboratory, whose Supernova Cosmology Project team published similar results shortly after those published by Riess and Schmidt. The two teams had earlier shared the Peter Gruber Foundation's 2007 Cosmology Prize—a gold medal and $500,000—for the discovery of dark energy, which Science magazine in 1998 had called the "Breakthrough Discovery of the Year"; and, in 2006, the $1 million Shaw Prize, considered by some to be "the Nobel of the East," for the same discovery.

Considered the most prestigious prize in the world, the Nobel has been awarded for achievements in physics, chemistry, physiology or medicine, literature and peace since 1901. Riess, Schmidt and Perlmutter will receive medals and diplomas, and the two teams will share a cash award of $1.49 million to be presented at a ceremony in Stockholm in December.

Riess is the 35th person associated with Johns Hopkins as a faculty member, fellow or graduate to win a Nobel Prize. He joins three other Nobel laureates on the university's current faculty: Riccardo Giacconi, University Professor of Physics and Astronomy, who won the physics prize in 2002; Peter Agre, a 1974 School of Medicine graduate, former professor in the School of Medicine and now director of the Malaria Research Institute in the Bloomberg School of Public Health, who won the chemistry prize in 2003; and Carol Greider, professor and director of Molecular Biology and Genetics in the School of Medicine, who won 2009's physiology or medicine prize.

President Ronald J. Daniels, who spoke at the press conference, said that it was a proud day for Johns Hopkins. "There is no greater pleasure for a university president than to celebrate the truly stellar—an appropriate adjective for today—achievements of its very distinguished faculty," Daniels said. "And today I'm thrilled to be able to join the Nobel committee in honoring the extraordinary accomplishments of Adam Riess." 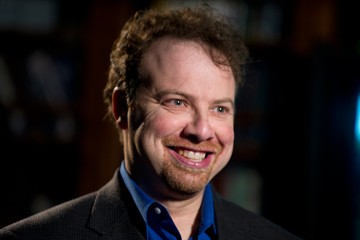