Innovative pairing of one discovery to something thought to be unrelated is often the best way to advance science, he says 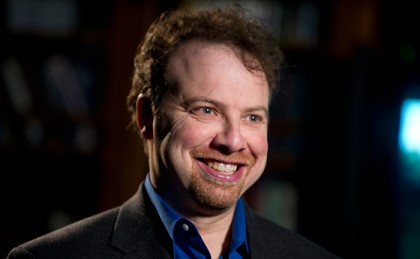 Image caption: Adam Riess, the Krieger-Eisenhower Professor in Physics and Astronomy at Johns Hopkins, received the Nobel Prize in Physics October 2011 for his discovery that the expansion rate of the universe is accelerating, a phenomenon widely attributed to a mysterious, unexplained "dark energy" filling the universe.

Nobel laureate Adam Riess understands the power of focus. The Krieger-Eisenhower Professor in Physics and Astronomy and Space Telescope Science Institute scientist tells a story about coming up with a great idea while swimming laps, noting almost parenthetically that it came to him in that seemingly inauspicious setting "because I just am always thinking about, How do we measure distances in the universe?"

Even, apparently, when doing laps. So you're the guy who's always thinking about measuring distances in the universe? "Yeah," he replies without missing a beat. "That's my thing."

The countercultural comedian and acerbic critic George Carlin once captured the special genius of American capitalism this way: "If you can nail together two things that have never been nailed together before, some dumb schmuck will buy it from you." It may be the Ronco Pocket Fisherman or electric shears coupled with a vacuum cleaner in the guise of the Flowbee; or it could be Benjamin Franklin's bifocals or the combine harvester; a common thread in the history of American innovation—both the ridiculous and the sublime—is that somebody saw a way of pulling two different ideas together in a combination that offers something new.

And that, says Riess, is often the best way to advance science as well: by innovatively pairing one technique or discovery to a problem or challenge previously thought to be wholly unrelated. But making those connections takes focus, a kind of single-mindedness of purpose that enables you to introduce yourself at cocktail parties as the guy who is always trying to measure cosmic distances. "Somebody else came up with some technology, some ideas for something totally different, but you're the person who's walking around going, 'I just want to find an answer to this problem,'" is how Riess describes it. "It's like you're taking everybody's idea or thought or suggestion and you're testing it on your problem and looking for a match."

In one sense, Riess's Nobel Prize stems from the innovative ability to perform that kind of matching of seemingly disparate ideas. Riess was one part of two rival teams of scientists looking to measure how quickly the known expansion of the universe was slowing down, the anticipated logical result of the universal force of gravity imposed by the total mass of the universe. The scientists innovatively combined the studies of two observable phenomena: the first being the ability to determine how long ago a specific type of star explosion known as a Type Ia supernovae occurred by the brightness of light measured; the second being the speed at which the exploded star was traveling away from Earth by the color spectrum of that light, which shifts increasingly to the longer-waved red spectrum the faster it moves away. What they didn't expect to discover was that the stars that exploded more recently are traveling away from Earth at a faster rate than those that exploded long before. Rather than slowing down, the expansion of the universe is actually accelerating. One often unrecognized characteristic of innovators is the willingness to accept the unexpected—it is the ability to embrace surprise.

And although Adam Riess—who is self-effacing and unpretentious by nature—would be loath to speak of it, there is an element of bravery needed as well if you're really going to be an innovator. His team's findings were so contrary to all expectations that they delayed publishing or reporting what they discovered, preferring to spend time checking and re-checking and even re-re-checking their calculations. Eventually though, Riess rallied the troops by an e-mail he sent. "Approach these results not with your heart or head but with your eyes," he wrote when he was all of 28 years old. "We are observers after all!"

Riess recognizes that he is in some respects only the most recent embodiment of Pasteur's famous dictum that chance favors only the prepared mind. And that's the thing, he says, about innovation: you have to be ready, you need to be open, but you can't just make it happen. "You can't predict innovation," is how he responds to forces in our society arguing that the only worthwhile research is research that promises sure and prompt repayment. "The most basic research and development is something that is very difficult to predict. Yet for those who will say that we shouldn't innovate like that, that we should only do incremental steps that we know of, you need to remember that some of our greatest and most important contributions have come out of the box."