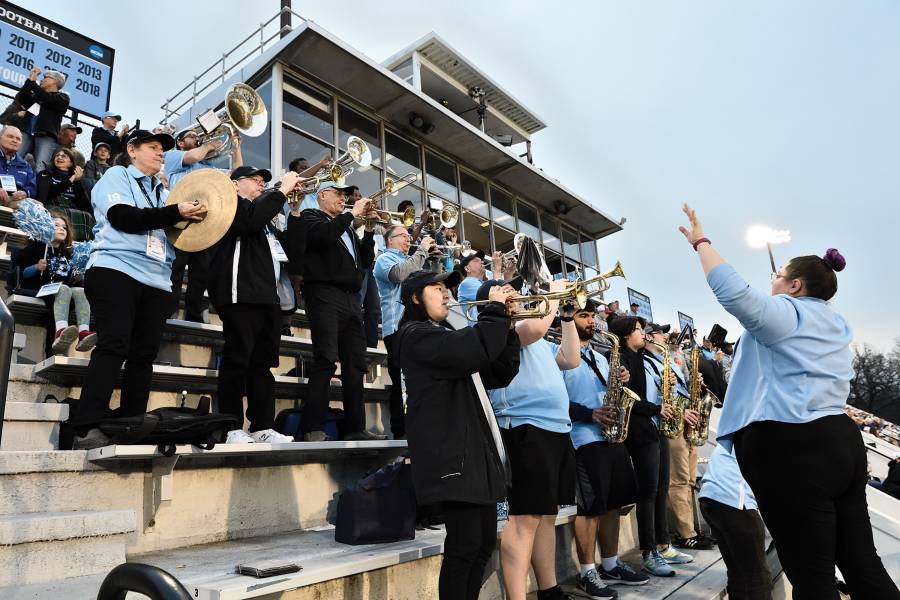 A look back at the persistently pesky music troupe

When Emily Joseph first considered joining the Johns Hopkins pep band as a graduate student, she worried about a rigid commitment. Having performed in a pep band as an undergrad in San Jose, she had associations of "strict uniforms and memorized music," says Joseph, Peab '12 (MM), '14 (GPD).

A friend reassured her that the Hopkins band was a looser arrangement. The troupe Joseph joined as a trombonist—and now directs—dons blue polo shirts and stands among fans in the bleachers, a quirky mishmash of seasoned and amateur musicians who never march in formation.

Known as a pesky gnat in the ear of opposing teams, the band famously erupts into the Hopkins fight song, "To Win," after every goal, followed by fans chant-counting the number of goals so far, then "We want more!" On breaks, the band dips into its catalog of hits, songs like "Paranoid" by Black Sabbath, "Take on Me" by a-ha, and The Muppet Show theme.

The 2021–22 academic year marks a major milestone for the JHU pep band: its 100th anniversary. That landmark may have passed without notice if not for the band's tagline, Forcing merriment and mayhem—since 1921.

"We just kind of bring the spirit where it isn't," says Lauren Williams, the band's current president and a senior cognitive science student. "Some people may find it annoying, but it's never malicious."

Old editions of the Hullabaloo yearbook credit a student named Mike Bowers with gathering a small group of wind instrumentalists in the spring of 1921, ultimately organizing a band that would play at every lacrosse game that season and every football game the following autumn. Over time, the band started traveling to away games, too. 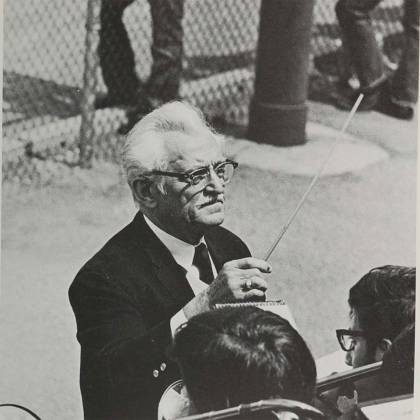 At some point that decade, the band came under the domain of conductor Conrad "Gebby" Gebelein, who at the time directed all music programs at Hopkins. A Bavarian immigrant who had settled in Baltimore as a teenager, Gebelein became an institution in the city's music scene, organizing its first mandolin orchestra, playing the first live music on WBAL-AM as leader of a radio orchestra, and teaching music at local schools.

A passionate fan of Blue Jays lacrosse, Gebelein established the pep band's tradition of playing "To Win" after every Hopkins goal. At 20 goals, he'd strike up the band for Oktoberfest favorite "Oh du lieber Augustin." He was known to get emotionally involved in the matches, bolting onto the field after calls he deemed unfair and waving his baton at the referee.

In its early days, the Hopkins band operated in a more traditional marching band style, often assembling into a large "H" on the field. But later, "informality was key," says Stan Haavik, Engr '64, who played clarinet with the band in the early 1960s. "We were there for a fun time and to play for the big crowds because after all, this was Hopkins lacrosse."

Haavik remembers Gebelein as "a joy to be around—always full of humor, with a big smile and a few jokes to share. We were there for him and I think to be with him, as much as anything."

Trumpeter Irv Litofsky, A&S '73, remembers it felt odd to call an elder "Gebby," but "we got used to it very quickly. He was an exceptional individual and got everyone hooked on the band."

In 1967, the grandstand on the south side of Homewood Field was named in Gebelein's honor. He retired in 1971 after nearly 50 years directing music at Hopkins but stayed on as "conductor emeritus" until 1979, two years before his death at the age of 86.

"They can kind of climb in your head"

The Hopkins pep band is notorious as a thorn in the side of rival teams and their coaches. "I think success for us is getting under the skin of the opposing coach," Litofsky says. "There were a few legendary ones over the years that really didn't like our band."

In 2008, Syracuse lacrosse coach John Desko told the local newspaper that the Hopkins team has "a very annoying band that tends to follow them everywhere they go," adding: "They can kind of climb in your head."

During one 1999 game, a Washington Post reporter overheard a University of Maryland player's complaint: How many times have we heard that song tonight? I'm getting sick of it." 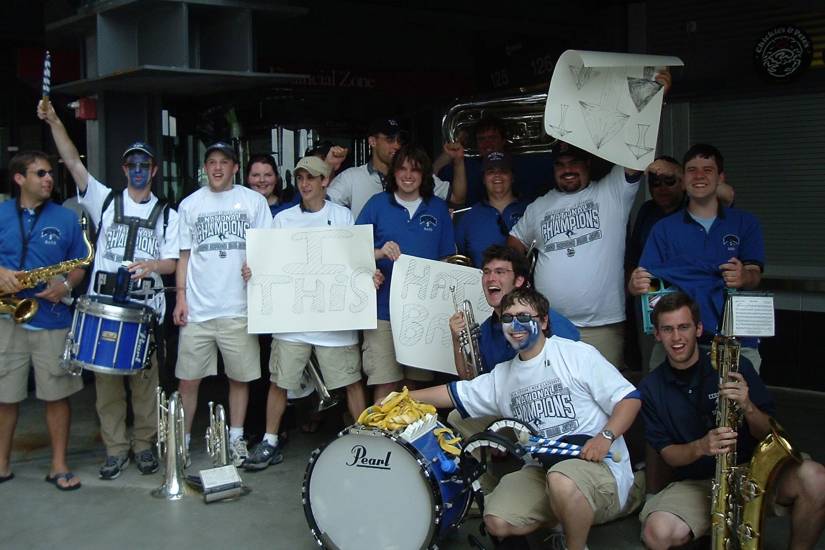 Image caption: Members of the 2005 JHU pep band proudly hold up posters that read "I hate this band"

When Johns Hopkins reached the lacrosse semifinals in Philadelphia in 2005, rival fans brandished signs declaring "We Hate This Band," with an arrow pointing to the JHU troupe. After the game, the Hopkins band posed for pictures with those signs, ultimately seizing possession of them, according to the JHU News-Letter.

Of course, the band also has also charmed many fans over the years. Some recall, in the '90s, band members lifting the mood of the soaked crowd during a rainstorm, belting out "The Lion Sleeps Tonight" in falsetto. In the aughts, the band was known to make rounds around campus on Halloween, playing the Ghostbusters theme from the top of the Gilman bell tower, and at Christmas, they'd go caroling. Once, they performed at a wedding of two Hopkins lacrosse fans.

During lacrosse season, the pep band enjoys camaraderie with the Blue Jay Bananas, a gathering of alumni superfans who don yellow shirts, wave bananas in the air at victories, and toss out the fruit at stellar players. "It's one of those things that, when you join pep, you just don't question," says Williams, the band's president.

Historically, the Hopkins band has centered its devotion on men's lacrosse in the spring—possibly the only band in the country to do so—and football in the fall, traveling to every away game. When COVID-19 hit, the band stopped performing entirely for the 2020–21 academic year and reactivated in fall 2021 when spectators were invited back to home games.

"Everyone was incredibly excited again," says Joseph, the band's director. "The first football game was full of energy."

Since then, their focus has remained on campus, with the band supporting a wider variety of sports, including water polo and swim meets, gymnastic events, and field hockey games, among others. For the near future, budget constraints will continue to curtail any travel, according to Joseph.

The band today includes about 30 instrumentalists, who pop in and out of the roster as they're available. "Even if people don't come often, they will definitely still feel a sense of community," Williams says. Most are undergraduates who played in bands during high school; some are graduate students. The band also welcomes an alumni presence. "They may still be in Baltimore or going to grad school, but some are like me, who have been out of school for years and still enjoy coming back," says Litofsky, who remains an active member today. "A lot of the music doesn't change, so it's easy to jump back in without much rehearsal."

In 2020, Litofsky—who says he once played "To Win" at a friend's funeral—was honored in the Hopkins Athletics Hall of Fame in the nonathlete category, along with his wife Cathy Litofsky, who has played in the band since 1976, when she joined as a Goucher student.

"My trumpet muscles will atrophy if I don't play," Litofsky says. He adds that he tried community orchestras and a few other scenarios, but "I guess not having the Hopkins association, it just wasn't as fun."