For nearly 40 years, the Blue Jay Bananas have been a staple of Hopkins lacrosse games 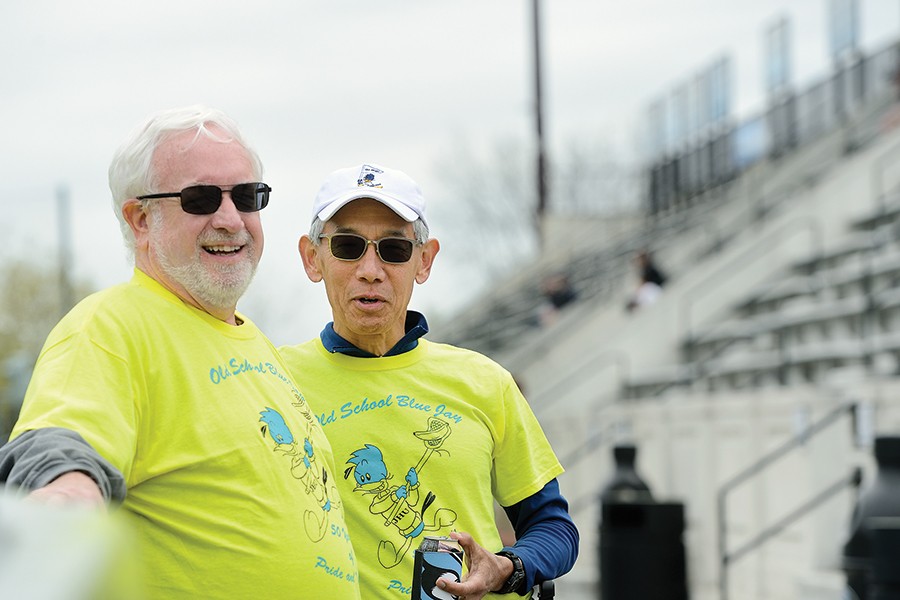 In the shadow of the Homewood Field scoreboard, Chris Tsien, A&S '74, and his band of Blue Jay Bananas gather to tailgate before a Johns Hopkins lacrosse game, just as they have done for almost 40 years. Decked out in yellow T-shirts featuring Neil Grauer's classic cartoon blue jay with a banana in its lacrosse stick, the Bananas are hard to miss on this late March afternoon.

"It is a way of keeping in touch," Tsien says of the mishmash of superfans brought together by the school's most prominent sport. "It's not the reason we do this—the reason is lacrosse—but the result is we keep in touch." Tsien says the group got its name during a neutral-site game against Harvard in Manhasset, New York, in March 1978. The then boyfriend of Diane Reese, A&S '76, one of the group's original members, brought a bag of bananas to the game. As the Blue Jays rolled to an 11-4 victory in a driving rainstorm, the group waved the bananas as a presumptive celebration.

"I thought 'OK, what the heck,'" Tsien says. "It kind of went from there." Eventually, it morphed into tossing bananas to players who performed well during the game.

The Bananas travel, fruit in hand, to every game within 200 miles of Homewood campus

These days, the Bananas travel, fruit in hand, to every game within 200 miles of Homewood campus. Sandy Jordan, A&S '72, says he used to be part of a different fan group with its own traditions, but Tsien's is the one that endures. "People moved away, people got old," Jordan says between trading good-natured barbs with Tsien. "Everybody started coalescing. Chris' was the one group right from the start that was always there." On a typical day, they collectively total about a dozen fans, sometimes more depending on weather and opponent. And the range of ages? "Let's see," Tsien says. "Old to decrepit?"

Half an hour before the opening face-off, the Bananas climb up to their customary place in the bleachers near the pep band. "It's one of those things that's grown and woven together," says Irv Litofsky, A&S '73, who has been a member of the pep band since his undergraduate days. "Now the band people are pretty much an adjunct of the Bananas." As the afternoon comes to a close, Hopkins earns a victory over Virginia. The group praises a breakout performance, grumbles about the officiating, and savors the triumph. Then the bananas come out. Tsien scrawls "31" in Sharpie, gets face-off man Hunter Moreland's attention as he walks off the field, and tosses the fruit from the stands. Moreland catches it, then points back in appreciation to cheers from the Bananas.

"We outlast the parents," Tsien says. "We've been here. We've seen the good, the bad, and the ugly. It just continues because the good far outweighs the bad."