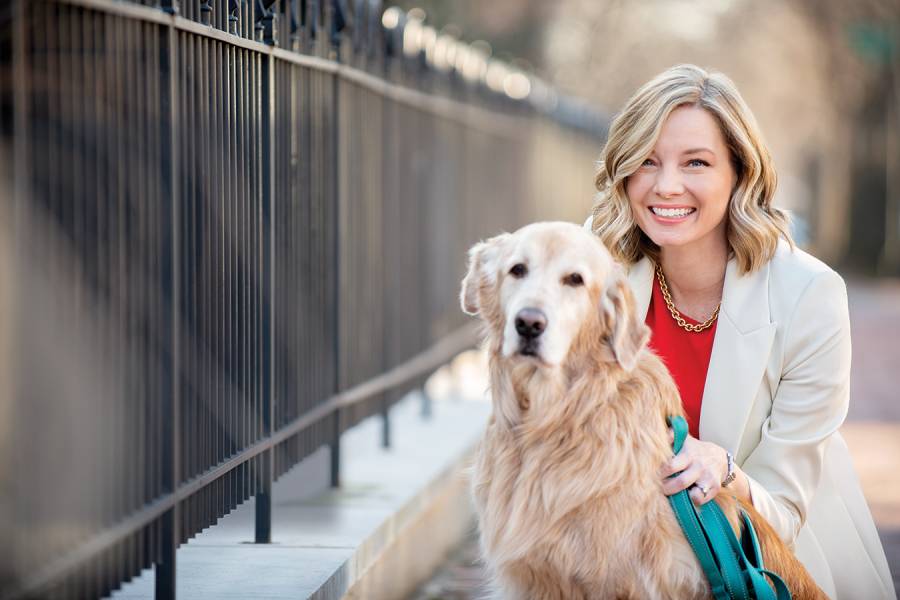 Growing up in Orlando in the 1990s as a debate club enthusiast and West Wing obsessive, Kristen Soltis Anderson felt pulled toward the wonkiness of Washington, D.C. At the time, though, her future profession—pollster—wasn't on her radar.

"The industry was not as much in the public consciousness, and not playing such a starring role in the way we cover elections and politics," says Anderson, A&S '09 (MA). Over the past decade, she says, hunger for consuming political data has swelled beyond D.C. insiders, with election needles and sites like FiveThirtyEight going mainstream and pollsters like herself growing in visibility.

Today Anderson, a leading GOP millennial pollster, hosts weekly shows on Fox Nation and SiriusXM and pens columns for the Washington Examiner. With an eye toward polling's digital future, she co-founded her firm, Echelon Insights, in 2014. During the coronavirus pandemic, she has worked mainly from her Capitol Hill rowhouse, which she shares with her husband, Chris, and a graying golden retriever named Wally (now Twitter-famous through Anderson's #dailywally pics).

"I've heard it said that polls are good at measuring pounds, not ounces."
Kristen Soltis Anderson

On a Zoom call in January, Anderson was still sorting through the post-election fog. She's proud of her firm's close forecast for the record voter turnout and notes that pollsters also predicted the exceptionally tight Democratic victory in the Georgia Senate runoffs.

Still, Anderson acknowledges the distrust many feel for her industry. "And they have relatively good reasons for thinking that," she says, "whether it's being surprised by the results of an election, or the fact that they've never been called for a poll." It's vital, she believes, to reframe expectations around political polls and their power to prognosticate. "I've heard it said that polls are good at measuring pounds, not ounces."

In Anderson's early days in D.C., she discovered a talent for crunching data at the Winston Group polling firm. Around that time, she also enrolled in the master's in government program at Johns Hopkins, writing her thesis on the voting patterns of millennials. One impetus, she said, was to better understand why many of her peers would say things like: "But Kristen, you seem so nice and normal. How can you be a Republican?"

Anderson's thesis also formed the foundation of her 2015 book, The Selfie Vote: Where Millennials Are Leading America (And How Republicans Can Keep Up) (Broadside Books). She muses today that the book is a relic in one respect: "The word 'Trump' doesn't appear whatsoever."

It was Trump's upset victory in 2016 that forced a crucial reckoning for the polling industry. After covering that election night for ABC News, Anderson remembers heading home in the wee hours with grave concerns about how pollsters missed the mark. In the end, though, she believes that experience shook her up in the best way. "I think that has ultimately made me much better at being a pollster because now I am so reluctant to say that anything is certain," Anderson says. "Anytime the evidence is all pointing in one direction, I think it's still important to leave it open in your mind: What could I be missing?"

Favorite part of growing up in Orlando: Access to the theme parks. As a local, you can get very inexpensive passes and go during the off times.

How Wally came into her life: I didn't grow up around any pets, and I used to be very afraid of dogs. But my husband grew up with golden retrievers and I came around to the idea. We adopted Wally in 2018 from Kyra's Rescue, an organization that rescues golden retrievers from Turkey. He's an absolute angel.