Icebreaker: What is your fondest memory from your time at Johns Hopkins?

Graduating on the lacrosse field with my father, wife, and son in the stands. It took me a long time to get my master's degree in counseling. I graduated from high school in 1980, spent five years in the Air Force, graduated from the University of Maryland in 1990 with my bachelor's degree. Finally, in 2010, I graduated from Johns Hopkins with my master's. I was glad my father was still alive to see that; he was so proud.

I was the only male in my family in three generations to graduate from high school, and the only one in my family of five to go to college. It was a hard, long path to get there but was worth every sacrifice. —Kurt Knower, Ed '10 (MS)

I received my PhD in chemistry in 1962; my preceptor was the late Professor Walter Koski. I thoroughly enjoyed my graduate studies even though I was terrified of failure and in awe of the scholars who were my professors. Many Hopkins moments stand out, including when Professor Aihud Pevsner announced, "I am satisfied," when I answered his question at my oral prelim, as well as when my little mass spectrometer actually separated deuterated glycine from "ordinary" glycine. The moment that stands out most, however, occurred just after the orals. I was walking across campus when I was hailed by Professor George Owen, who called out, "Hey there, Dr. Weiner," and when I turned toward him, said, "I just wanted to see you smile." —Ruth Weiner, A&S '62 (PhD) 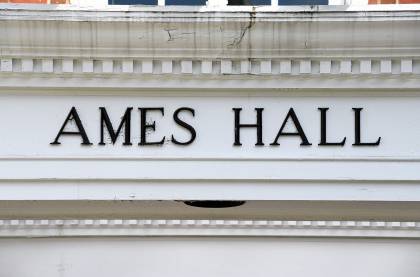 In my sophomore year, the Psychology Department moved into brand new Ames Hall, which had office space for psychology majors who were doing research. Many evenings, we Baltimore undergrad majors, who could not benefit from dorm living togetherness, gathered in our offices to interact with one another and with a few graduate students. I have fond memories of being around, talking with, and learning from my student colleagues in those informal sessions. —Larry C. Kerpelman, A&S '58

It was winter 1974, my senior year in the first coed undergraduate class. I was vice president of Omicron Delta Kappa, the leadership society, which was going to feature Elliot Richardson, the attorney general, as its Milford Whitehill Lecture speaker that spring. But then the Nixon tapes were published—his obsession with Alger Hiss, A&S '26, out there with a fury—and I decided we should invite Alger Hiss, not Elliot Richardson. Chris Lee, my ODK conspirator-in-arms and later in life a trustee of the university, and I went to visit Milford Whitehill, who lived in one of the large apartment buildings on St. Paul Street, to get his approval. "Of course, of course, shake things up, get some excitement going," he said. We then all had omelets to toast our plan. Chris and I stayed up all night penning a letter to Alger Hiss, who had been the star graduate his year, chaired the Carnegie Endowment for International Peace, and had been in talks about becoming president of Johns Hopkins, only to be convicted of lying to a grand jury about being a Russian spy. He felt Hopkins had turned its back on him, and he had never returned to campus. So when he wrote back to say our letter had touched his heart and he would come—on the stipulation that he could teach a policy class—Chris in his pajamas and I ran to see Ron Walters, a professor in the History Department. What Alger Hiss did not take into account was that there never were any classes on Friday afternoons, when he would be there. What to do? Ron Walters never hesitated. With aplomb he called his grad students and we called a few friends, and on a Friday afternoon in May 1974 Alger Hiss taught a hastily contrived fake class at Hopkins with wit and keen intellect. —Mindy Farber, A&S '74

Next up: "The Book of Pete" ushers in a new era for Johns Hopkins Athletics. Blue Jays—athletes and fans alike—tell us your favorite Homewood Field story. Send responses to jdb@jhu.edu with "Icebreaker" in the subject line. If we print your response, we'll send you a JHU pocket notebook.