Honoring a mentor and friend 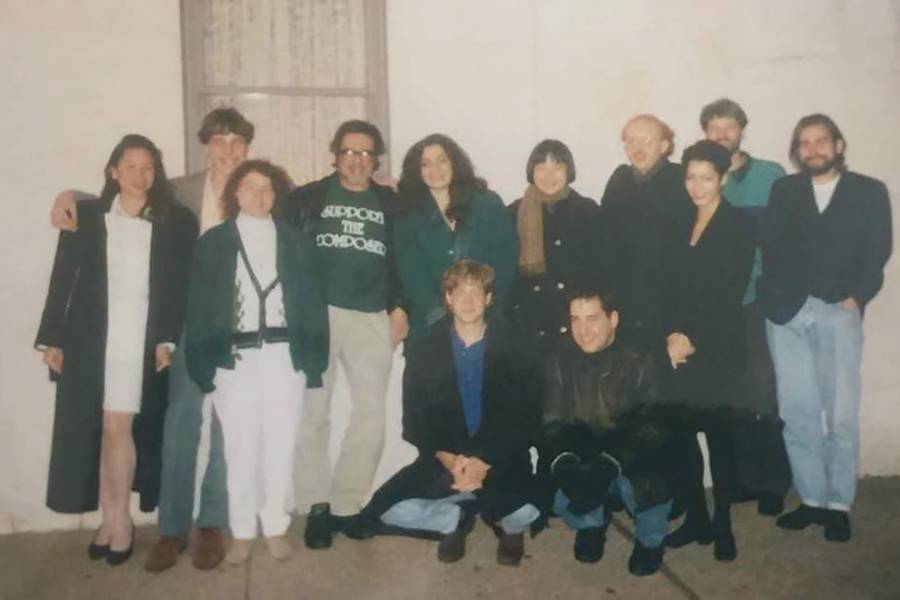 Image caption: Leon Fleisher, fourth from the left, hosted a party for his students, including Brian Ganz, standing, second from the right, to celebrate their performance in December 1993 of all 32 piano sonatas of Beethoven in a single day.

Pianist Inna Faliks, Peab '99, '01 (MM), '03 (GPD), has been livestreaming weekly concerts from her Los Angeles home throughout the coronavirus pandemic, but one recital in August was particularly emotional and personal. She was among dozens of Peabody alumni who gathered online to perform in honor of renowned pianist Leon Fleisher, who died that month at 92 after more than six decades of teaching at Hopkins. "He didn't just influence his students at Peabody. He influenced the students of students of students," Faliks says. "His legacy really is immeasurable."

Fleisher's former students paid tribute from around the globe for more than a week. The celebration gave them the opportunity to see old friends, reconnect with classmates, and above all, commemorate a man who had greatly inspired their careers and lives. After performing a Tchaikovsky nocturne in the online celebration, Faliks recalled Fleisher's poetic descriptions of how one should perform certain works, insights that she now shares with her own pupils as head of the piano department at UCLA. For instance, she remembers him saying the 16th notes of a Mozart concerto should "burst forth like champagne bubbles." Adds Faliks: "The way he spoke about that concerto, and the way he would demonstrate it, was absolutely unforgettable. For him, it was all about making music come to life."

For Brian Ganz, Peab '93 (AD), playing the second movement of Beethoven's Sonata Pathétique was a perfect way to express his love and appreciation for Fleisher, who taught him first privately as a teenager and later at Hopkins. He selected the piece because a highlight of his time at the Conservatory was when Fleisher's students played all 32 Beethoven sonatas in a single day. "I think we started at 8 in the morning and went until midnight," says Ganz, who became Fleisher's colleague, after joining the Peabody faculty in 2000. "His students formed a strong sense of community and mutual support that extends to this day."

Ganz also spoke of his admiration of how Fleisher overcame adversity. When a neurological condition affected his right hand, Fleisher focused on teaching and conducting, as well as mastering a left-handed repertoire. (He was later able to return to two-handed playing.) "That was very much an embodiment of his whole notion that music was an act of service, not about one's ego or winning approval or fame," Ganz says. Although he would rather have attended an in-person memorial for his mentor, Ganz says honoring Fleisher online was surprisingly touching. "It would be wonderful for us all to actually come together and hug each other and cry and grieve together, but it was very deeply meaningful and healing," he says. "I was honored and thrilled to be part of it."