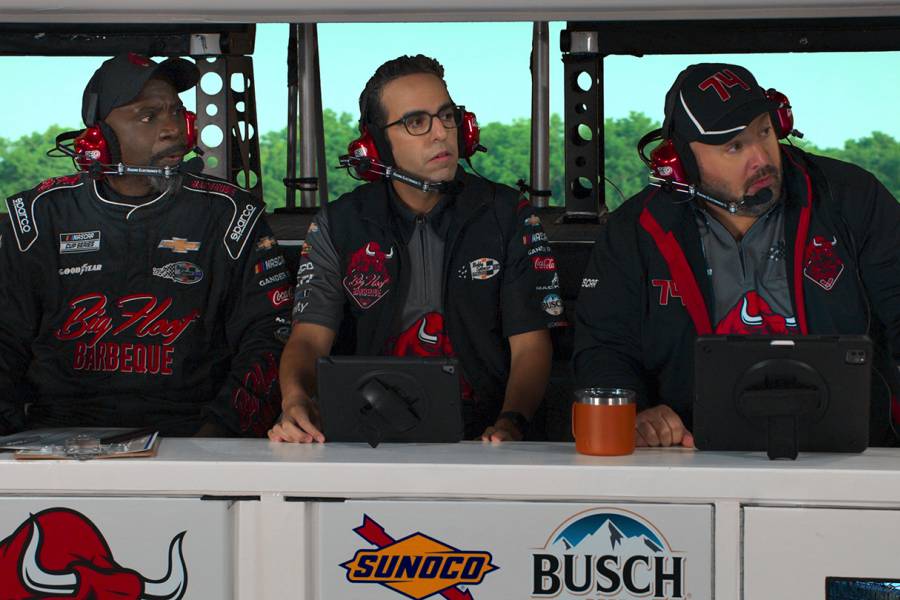 Dan Ahdoot, A&S '00, was already feeling pretty confident in 2019 when his agent landed him an audition for a sizable role in The Crew, a NASCAR-inspired sitcom Netflix was developing. The comic, actor, and writer had a decades-long standup career that included multiple appearances on The Tonight Show and being a finalist on NBC's Last Comic Standing. Acting-wise, he could be seen on Pluto TV's real estate show spoof Bajillion Dollar Propertie$, Showtime's long-running Shameless, and YouTube Premium's Cobra Kai (a reboot of The Karate Kid franchise from the 1980s, starring original "kid" Ralph Macchio). 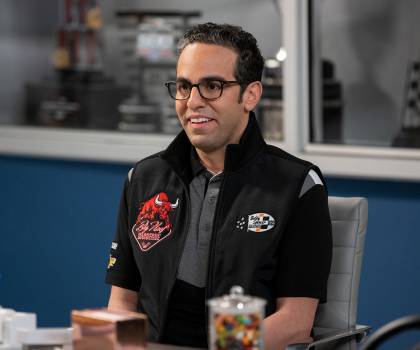 Image caption: Dan Ahdoot as Amir in episode 102 of The Crew

"I was lucky where I had a bunch of other stuff going on in my career at that time," Ahdoot says over Zoom from his Los Angeles home. But Ahdoot jumped at the chance to audition, despite being clueless about auto racing, because—Netflix! The streaming giant has morphed into a major creator of original programming. The role was chief engineer of a beleaguered race team, and Ahdoot felt self-assured enough to play it his way.

"I was like, man, I want to play it like a real super weirdo. If they like it, great. If they don't, that's fine—they can find someone else," he says.

When Ahdoot's agent phoned two months later to say The Crew wanted him back for a second read, the comic was blasé. "I was like, which one was that again?" he recalls. But he snapped to attention once told he'd be reading with the show's marquee star, comedian Kevin James (of CBS' nine-year hit The King of Queens) who is among the show's executive producers. "I was like, are you kidding me?" Ahdoot says. "I loved his standup going back to the 2000s." He had some butterflies in the stomach this go-round, but he stuck to his goofball guns: "I just read it as the weirdo," he says, "and they gave it to me the next day."

"I was like, man, I want to play it like a real super weirdo. If they like it, great. If they don't, that's fine—they can find someone else."
Dan Ahdoot

The Crew premiered February 15 with 10 half-hour episodes revolving around the fictional Bobby Spencer Racing Team, which runs NASCAR ovals in car #74. Ahdoot's self-styled oddball engineer is fidgety Amir Lajani. The script describes him as "socially awkward," but the comic kicks that up a notch. "I make him socially tortured," Ahdoot says. "He is an outsider who tries way too hard to fit in. He is too smart for his own good." An example? Amir buys the team owner Hamilton tickets for his birthday—not quite getting that the bolo-tie-clad good ol' boy (played by veteran character actor Bruce McGill—D-Day in Animal House!) is more attuned to another team member's gift: homemade squirrel sausage.

A season's worth of comedy ensues after the team owner's Stanford-educated daughter takes the reins, clashing at once with her old-school, driver-turned-crew-chief (played by James). Lajani tries to please everyone while secretly embracing the techy changes as the resident neurotic nerd. NASCAR is a financial partner in the production and notable drivers Ryan Blaney and Austin Dillon have cameos, though Ahdoot says the show's not just for gearheads. "You absolutely don't need to know anything about NASCAR to just enjoy it as an awesome workplace comedy," he says. "But I've become a fan of NASCAR because now I want to watch these guys." (The action largely bounces between a garage and a bar called Pit Stop—think Taxi meets Cheers.) In the biz, The Crew is known as a multicamera sitcom—like Seinfeld and Friends—playlike productions largely shot on a soundstage, sometimes before an audience. "They do give us a lot of freedom to improvise, which is rare on multicamera shows," Ahdoot says.

Improvisation was his entrée into comedy back on Homewood campus, where he was a four-year member of the university improv group, the Buttered Niblets. By senior year, Ahdoot balanced hitting the books for his premed studies with hitting open mic nights. He ultimately chucked the chance to go to med school for the comic life. "The work ethic I picked up at Hopkins was intense, which is what you need to make a career in comedy," he says. "To bring that intensity to the entertainment field has been super helpful."

And it's all paying off. Ahdoot is now in two Netflix comedies, as last year the streaming platform acquired Cobra Kai from YouTube and ordered a fourth season. He plays a recurring character called Anoush, a salesman in Macchio's auto empire. Ahdoot is a first-generation Jewish Iranian American whose autobiographical standup routines make much hay of his heritage. He's pleased that Middle Eastern names are going mainstream. "If you have preconceived notions of what a Middle Eastern person is like, and then I can make you laugh, I'm hoping to open your eyes," Ahdoot says. "And I'm glad that Netflix is behind that."