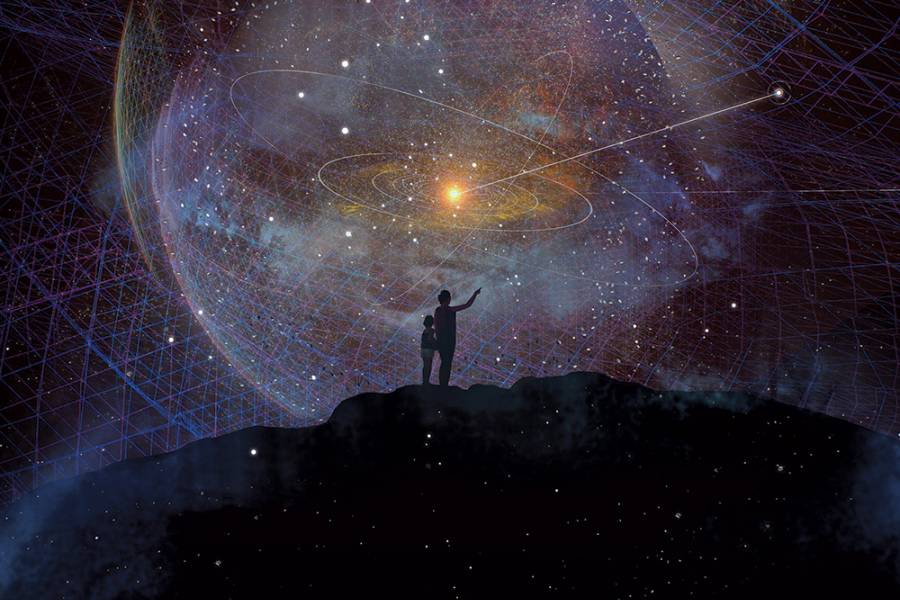 Going interstellar with a sun-skirting probe

How's this for a paradox: In order to go farther from the sun than we've ever gone before, first we must go closer to the sun than ever before. That's the counterintuitive concept at the heart of the Interstellar Probe mission in development at the Johns Hopkins Applied Physics Laboratory, in collaboration with NASA. The mission's primary goal is to explore the far-off region where our sun's influence wanes and interstellar space begins. Yet to get there in any reasonable span of time—say 20 years—the probe must reach a blistering speed, upward of 200,000 miles per hour or about five times faster than any previous spacecraft.

Spearheading a way to accomplish this feat is Jason Benkoski, a materials scientist at APL. His team plans to attempt the first-ever solar Oberth maneuver, which involves flinging a spacecraft tightly around the sun and firing a thruster, allowing the star's gravitational pull to accelerate the craft to tremendous velocities.

"Pulling off this solar Oberth maneuver is one of the toughest problems you can imagine. As an engineer, it's a tremendously exciting challenge to get to work on."
Jason Benkoski
APL materials scientist

The trick, though, is surviving the extreme heat of this close encounter. For the greatest velocity bang for the buck, the probe must pass within a million miles of the sun's surface, or four times closer than the Parker Solar Probe (also developed at APL) will in 2025. Somehow, the Interstellar Probe will have to withstand temperatures of 4,500 degrees Fahrenheit—enough to melt any hardware, plus explosively ignite conventional rocket fuels.

"Pulling off this solar Oberth maneuver is one of the toughest problems you can imagine," Benkoski says. "As an engineer, it's a tremendously exciting challenge to get to work on." Benkoski and colleagues recently demonstrated what could prove to be an elegant solution. The researchers' starting point is a heat shield, a critical aerospace component typically made of either materials that absorb heat and reradiate it away or layers that intentionally vaporize off. Engineers have long relied on heat shields to protect spacecraft, including the Parker Solar Probe. But because no conceivable heat shield could endure the targeted infernal environment, "we had to think outside the box," he says.

To cool and preserve the integrity of the heat shield, the researchers made the conceptual breakthrough of incorporating tiny channels filled with hydrogen gas into the shield's bulk. During the probe's searing slingshot around the sun, the gas would heat up, expand, and course through the channels that all lead to a single exhaust nozzle. "The idea is to absorb all this heat with hydrogen," Benkoski says, "and shoot it out the back of the probe." In this way, the cooling setup also opportunistically doubles as an engine, thus supplying the thrust needed to complete the Oberth maneuver in the first place. "It's like hitting two birds with one stone," Benkoski says.

With this theoretical solution, the researchers had actually stumbled onto an old idea, called solar thermal propulsion. Although kicked around since the 1960s as a combustion-free way to enable space travel, it has never panned out. Thanks to advances in materials science and engineering, Benkoski and colleagues newly demonstrated the concept's feasibility with the first-ever solar thermal propulsion engine prototype.

Experiments bearing this out started last year in a modified shipping container on APL's campus. Dubbed a solar simulator and originally used to put the Parker Solar Probe through its paces, the container is lined with banks of LED lights that shine with 20 times the energy intensity of the noonday sun. In his simulator, Benkoski's team tested metal tiles about the size of a piece of printer paper with tubes attached to them. Instead of hydrogen, which is flammable in Earth's atmosphere, helium gas filled the tubes, serving as a stand-in coolant and propellant. When the tile was warmed under the LEDs' glow, the helium flowed through the tubes and then shot out of a nozzle, just as intended. Having succeeded with this proof of concept, the researchers now want to move to higher solar intensities, more realistic flight materials that are lighter than the metal tested thus far, and eventually hydrogen as the coolant-propellant.

The results could have major implications on the future of space exploration. To date, only two spacecraft—Voyagers 1 and 2, both launched in 1977—have left our solar system, having passed through the so-called heliopause boundary, where the sun's emitted magnetic field and energized particles cease their outward flow. But because the probes were designed to study the outer planets, neither Voyager went with the right science gear to properly document this poorly understood transitional region. Plus, it took Voyager 1, the first of the probes to go interstellar, an exhaustive 35 years to do so.

A solar-powered rocket might be our ticket to interstellar space

Enabled by solar thermal propulsion–powered Oberth maneuvers, Interstellar Probe and its descendants could open up the far reaches of the solar system and beyond to robotic exploration. Benkoski says probes could be launched on suitable trajectories to fly by some never-before-seen Kuiper Belt objects similar to Pluto. Yet another APL mission, New Horizons, visited Pluto for the first time a short while ago, in 2015, revealing a surprisingly varied and dynamic world. The overall goal for Interstellar Probe is to reach a vantage point at least 50 billion miles away, or about three times farther than the solar system's edge. From there, the probe should gain an eye-opening view on how our sun interacts with interstellar space.

"There's a lot of exciting science we want to do, like really understanding the full nature of the sun, its influence on the local space environment, and learning more about the Kuiper Belt," Benkoski says. "As much as we think we know, we still don't have a good idea of what's out there."