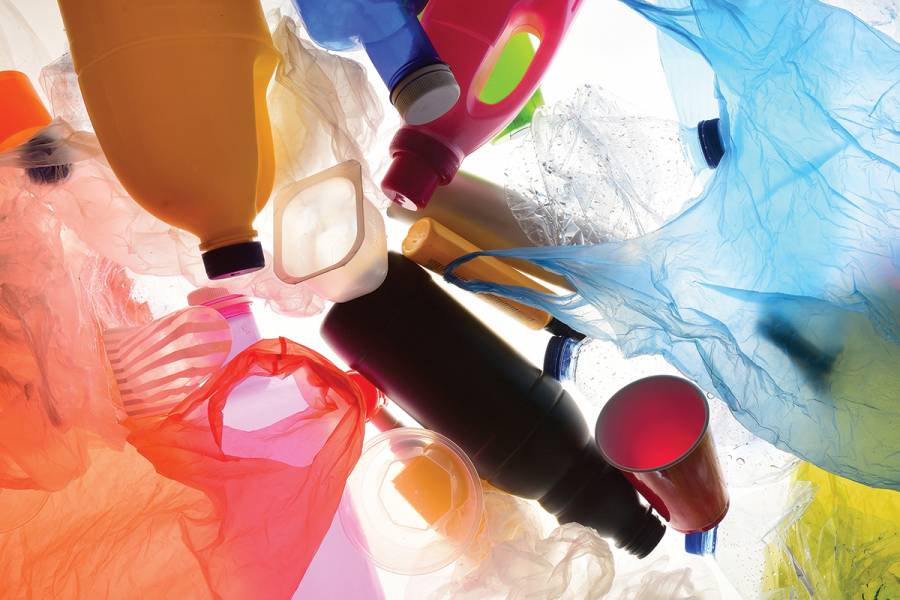 Right now, in waters that span the West Coast of North America to Japan, swirls the Great Pacific Garbage Patch. At its last sampling, scientists estimated that the patch contains more than 1.8 trillion pieces of plastic and weighs approximately 80,000 tons, or the equivalent of 500 jumbo jets. And it's growing.

The culprit, according to green engineering expert Chao Wang, is not just our voracious appetite for plastic packaging but a failure to recycle what we produce. Currently, of all the plastics generated and used in the United States, roughly 9% are recycled, 12% are incinerated in facilities that create electricity or heat from garbage, and the remaining 79% end up in landfills and the environment. (China, the world's largest market for mixed plastic waste, used to take nearly a third of ours but closed its doors to foreign waste in January 2018 under its National Sword policy.)

Wang, an associate professor of chemical and biomolecular engineering at Johns Hopkins, says this inefficiency is a major threat to the planet.

"What accumulates in our rivers eventually finds its way to the oceans, where it kills marine life like sea turtles and fish that ingest the microplastics or get tangled. We can literally see swirling fields of plastic trash from satellites in space."
Chao Wang
Department of Chemical and Biomolecular Engineering

"For years now, we have faced this enormous challenge of how to deal with our plastic waste," he says. "The majority of plastics we produce we can't mechanically recycle and put back on the shelf. So they end up in the ground for many, many years and produce a ton of environmental consequences. They contaminate the soil, pollute groundwater, and eventually break down and enter the atmosphere and air that we breathe. And then what accumulates in our rivers eventually finds its way to the oceans, where it kills marine life like sea turtles and fish that ingest the microplastics or get tangled. We can literally see swirling fields of plastic trash from satellites in space."

Wang, along with chemical engineer Michael Tsapatsis, postdoctoral fellow Pengfei Xie, and a team of graduate students, has devised a possible solution to the problem: transform a bulk of that worthless and harmful end-of-life and single-use plastic trash into something of value. Most of what does get recycled is high-quality plastic—think soda bottles and gallon milk jugs with a 1 or 2 marking on the bottom of the container. What ends up in landfills is a jumble of hard and soft plastics— straws, packing peanuts, grocery bags, toy packaging, etc., with recycling rankings from No. 3 to No. 7—mixed in with trash like food, paper, leaves, and metals. Its value on the open market is merely about $5 per ton, Wang says, as it's mostly low-quality plastics that not many deem worth sorting out. "Nobody wants to touch this stuff," he says.

The Johns Hopkins team developed a process to treat this mixture and turn it into xylene, a colorless chemical liquid that is primarily used in manufacturing. In the lab, the group has simulated the mixture that typically ends up in landfills by accumulating—and smashing with their bare hands—plastic and trash from their homes. Before it's placed into a hydrocracking reactor, the mixture is pre-treated to remove chlorine, which can lead to the corrosion of equipment. Then comes a two-stage process for hydrocracking depolymerization, a fancy name for plastic refining, akin to turning crude oil into gasoline. In step 1, the plastics react with a hydrogen catalyst to convert hydrocarbons to unrefined xylene. In step 2, pure p-xylene is separated from the less valuable isomers of xylene. P-xylene, worth $1 per kilogram, is a key building block in manufacturing things like rubber and leather products, and to refine other industrial chemicals.

These items in your home are harming America’s sea animals

Piling up: How China's ban on importing waste has stalled global recycling

"The potential profit margin is huge and that will, we hope, really drive the commercialization of this process, as you have economic motivation and the added benefit of cleaning up the environment," Wang says. "We can foresee that companies will come to you and pay you for the plastic waste mixture. This could become a valuable commodity."

This fall, the researchers received a $1 million seed grant from the Department of Energy's Recycle Underutilized Solids to Energy, or REUSE, program to scale up the project within 18 months. The project, currently in Phase 1, has some engineering problems to overcome. Currently, the Hopkins team has to stop and start the reaction, and then often run it again to realize the desired results. They want to be able to achieve continuous operation of the reactor so that it doesn't require such manual oversight and can be automated on a much larger scale.

Within a year or two, Wang says, they hope to demonstrate its effectiveness at a solid waste management facility in Maryland. If successful and implemented nationwide, he says the number of plastics recycled in the country could shoot up from 9% to 50%, or even higher. The sooner the better. In a 2017 study published in Science Advances, scientists warned that by 2050 the oceans will contain more plastic waste than fish, and roughly 12 billion metric tons will be in landfills or in the natural environment. "To turn that trash into this high value product could be a game changer," he says. "Our goal is very ambitious, but the benefits immense."