A LEGACY OF LOVE AND SUPPORT 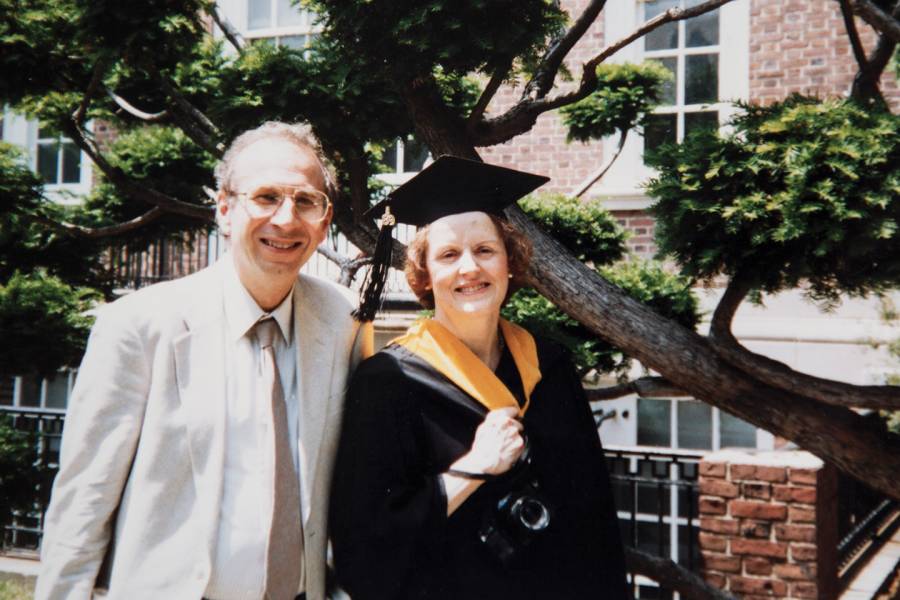 Image caption: Ella Kauffman pursued her master's degree in public administration from Johns Hopkins while working full time and raising a family with her husband, Fred.

Frederick "Fred" Kauffman built a successful life out of pharmacology research and teaching at three universities before he retired. But he didn't build his life in academia on his own. His wife, Ella, Bus '89 (MPA), a passionate public health nurse, was always at his side. With Ella's passing, Fred has honored her memory and increased opportunity for today's students by establishing the Ella S. and Frederick C. Kauffman Scholarship Fund at the Johns Hopkins Carey Business School.

"Giving is part of Fred's core," says Anne Haskins, associate director on the Regional Team of Development and Alumni Relations, who, along with Planned Giving colleague Michael Zerolnick and Carey Business School colleague Evan Zaletel helped bring Fred's gift to fruition. Fred has made gifts to the university since 2005, and his decision to establish a named scholarship at the Carey Business School deepens his commitment to education as it honors his wife and how grateful she was to Johns Hopkins for her advanced degree. "I am humbled to have had a role in helping Fred remember his wife in such a significant way."

Born Ella Jane Smith in Salisbury, Maryland, she grew up on a farm, one of five sisters, before moving as a young adult to Taneytown to live with a sister whose husband had died. Ella was working as a nurse when she met and later married Fred at church in Towson, Maryland. At the time, he was serving in the U.S. Army at Edgewood Chemical Center but had been discharged to attend graduate school. Shortly after their wedding, the couple moved to Chicago, where Fred pursued his studies and Ella worked on the city's North Side, an area of great need. "Ella's was a job that could be difficult, that sometimes required police escorts," says Fred, "but she was devoted to helping people in need."

While Fred pursued his career in academia, Ella took a decade away from work to stay home with their children, Elizabeth and Andrew. After Fred's first academic appointment in Buffalo, the family returned to Maryland and Ella returned to work, managing various public health stations in the Baltimore area. "We were essentially moving back to where we'd met," says Fred fondly.

During this time, Ella decided to further her education in order to better serve her work in public health nursing administration. "I remember us talking about her continuing her education," Fred says. "She was so enthused." Balancing a full-time job with family and school, Ella earned her master's degree in public administration in 1989 from what was then known as the Johns Hopkins School of Continuing Studies in Business and Education. "She was very proud to have graduated from such a fine business school," Fred says.

Their mutual respect and encouragement for their respective careers in academia and public health nursing provided Fred and Ella a good and happy life. They enjoyed traveling together, sharing sabbaticals of Fred's in São Paulo, Brazil, and in Dundee, Scotland. "I felt fortunate to have done what I chose to do over all those years. But it takes two," Fred says of the support needed to succeed in academia. "Ella really helped me through."

After Maryland, the Kauffmans moved to New Jersey, where Ella continued her work until she retired from the Visiting Nurse Association of Central New Jersey in 1995 for health reasons. During retirement, she enjoyed spending time with her children and three grandchildren and developed an interest in genealogy, charting the family's history. After Ella suffered a major stroke in 2002, life changed. She lost her speech, along with the use of her right arm and her ability to walk. "I became the chief cook and bottle-washer for the last 12 years of her life," Fred says. "But they were 12 good years."

His gift of a scholarship increases his commitment to students in the school that benefited his wife's career and life. Endowed scholarships provide ongoing, reliable operating income in perpetuity for future generations of students. "The generous gift of a scholarship reflects the deep and lasting relationship between this couple and the university where Ella studied—a university that values the meaningful connections we have with alumni and their families," Haskins says.

Fred, who turns 84 this summer, didn't have to wait for the scholarship fund to be endowed to see students at the Carey School benefit from his philanthropy. By making additional, outright gifts to Financial Aid, Fred can see his gift in action today. Named in 2019, the two inaugural Ella S. and Frederick C. Kauffman Scholarship Fund recipients are David Kim, a Master of Science candidate in finance; and Maziar Mohammadi, a Master of Business Administration candidate with a health care management concentration.

"I feel privileged to be able to encourage young people to pursue the educational path that Ella did," Fred says. "And I'm sure Ella would feel privileged, too."