AN EYE FOR THE NEXT BIG THING

Nan Zhang asks, "Why can't we shop in a new way that allows you to purchase directly with what you already own and save money from bypassing resale?"

Six years ago, Nan Zhang, A&S '12, SPH '14 (MHS), made a career detour. Instead of going to medical school and pursuing a career in neuroscience, she founded a nonprofit to help disadvantaged kids in Baltimore get adequate vision care. 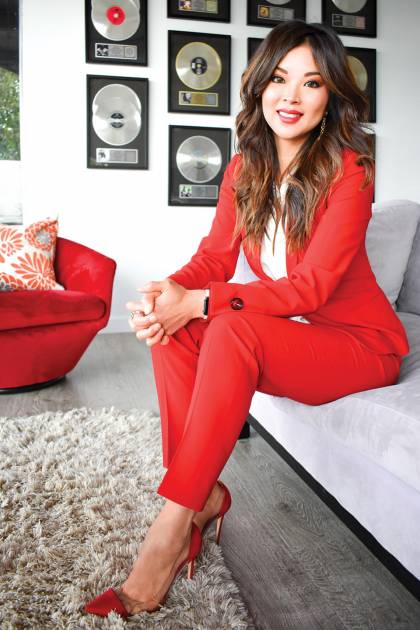 Along the way, she launched Vision Interchange, an online marketplace that lets customers trade in their gently used prescription eyeglasses with frames by designers such as Armani, Prada, and Versace—names familiar to Kati Farkas, the character Zhang played on the Manhattan prep-school television drama Gossip Girl. In exchange, they can select a comparable pair of new or used designer frames.

Zhang believes this model of "shopping with what you already own" is poised to disrupt the e-commerce landscape. With the eyewear market in play, her team is looking to expand into footwear, jewelry, real estate, vacations, and whatever else consumers may want to trade.

Zhang has long had a health career in mind. The daughter of Chinese physicians who emigrated to the U.S. when she was 6, Zhang began ophthalmology research at age 14, alongside professors and postdocs at the Louisiana State University Health Sciences Center. Then a resident of Slidell, Louisiana, she enrolled in Johns Hopkins, landed her Gossip Girl role, and hustled between New York and Baltimore to complete her degree in neuroscience. Zhang stayed at Hopkins to get her Master of Health Sciences in biochemistry and molecular biology, and added in a public health practicum at the Baltimore Youth Opportunity, or YO, Center, where the idea that started it all came into focus.

Tell us about the nonprofit cause that preceded Vision Interchange.

As part of the Master of Public Health Children in Crises course [taken as an elective], I was tutoring at the YO Center, which provides GED and job skills preparation to kids who were unable to attend public school. I noticed a lot of health disparities, like poor vision. Long periods of writing and reading would lead to migraines, eye pain, and discouragement. If poor vision inhibited their learning, how would it impact other parts of their life, like performing a job?

So, under advice from mentors like Lee Bone and Henry Taylor, I applied for an Albert Schweitzer Fellowship to start a nonprofit that would arrange for disadvantaged kids to receive vision care from young resident ophthalmologists through partnerships with local hospitals.

The other challenge was finding eyeglasses. Dr. Joshua Sharfstein put me in touch with a distributor who, surprisingly, loses tens of millions each year incinerating surplus frames in order to not dilute the market, and could donate up to 30,000 frames a quarter. But we still needed funding for lenses, which have a very narrow supply chain. That's when I decided to launch a business to help reduce costs for lenses.

Where did you see the business opportunity?

The cost of eyeglasses is not driven by the materials but by the frame's brand name. So, if I buy Gucci or Chanel or Prada one year and am ready for a new style next year, then I have to spend that money again. I wondered, "Why can't I trade my frames for a different pair of the same value, and get new lenses to fit?" We searched all e-commerce platforms and everything was designed for a one-way track. In order for inventory to replace inventory, we would have to design a two-way, backend inventory management system.

So we experimented with the model on Shopify, offering similar-value trades for a small service fee. Within two weeks, and with very little marketing, we grew gross profit margins by 87%, earning a global customer base as our inventory essentially replaced itself. Some customers asked if they could shop the same way for other items, like handbags. That's when we realized we were onto something much bigger—a new way to shop, with consumers using goods to shop directly while avoiding the resale process and a potential disruption in the e-commerce ecosystem.

What's your theory behind the demand of the exchange marketplace?

I think it has grown out of the sharing economy and the sustainability movement popularized by companies like Uber and Airbnb. If you look at millennial shopping trends, we're renting more, subscribing more. We always want the next experiential thing. We're owning a lot less than our parents' generation. And in this fast-paced system of getting the next thing, we're also leaving a lot of waste and we're losing a lot of money in the resale process.

After such a profound discovery, what's the next step?

We realized we weren't prepared for this kind of scale and were exposing our model to e-commerce giants. So we ended beta mode, shut down operations, and went into stealth mode. We had to patent this business process in a way similar to what Netflix did years ago to displace video rental stores. We got support from a patent firm, signed on with a leading startup accelerator, and got into the hard work of finding developers who could fully customize the back end of our two-way product management and buying system.

What have you learned through entrepreneurship?

First, start small. Figure out the business model and how to perfect the process and scale it before larger companies can duplicate it. Second, partner with experienced advisers who understand the challenges of innovation and startups. Third, listen to what consumers want. Through focus groups and direct consumer demand, we found people who we didn't think would fit within our initial demographic. Had we not paid attention to that feedback, we would have probably just stopped at a little eyeglasses company.