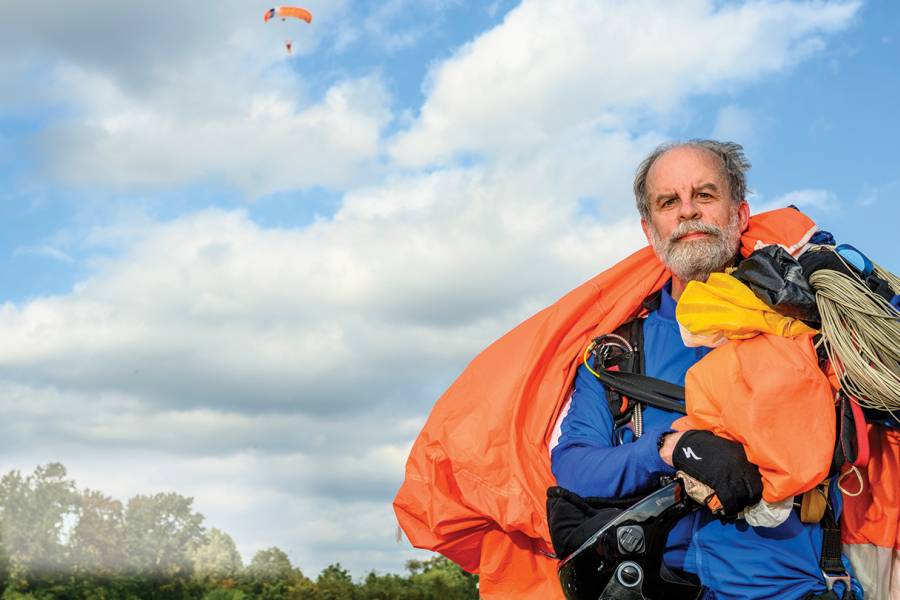 The sky is his playground

At 58, Hopkins alum and professor Larry Moulton took up a favorite pastime of his youth: skydiving. With more than 1,000 jumps to his name (and injuries only as severe as a bruised heel), the biostatistician has no plans to slow down.

Any given weekend, weather permitting, Larry Moulton gleefully jumps out of an airplane 13,500 feet in the sky. Once in flight, his arms and legs splay out and he hurtles some 120 to 180 mph toward the ground. Cool air whips across his face, and there's little he can do but wear a perma-smile. Surprisingly, Moulton, SPH '87 (PhD), barely feels the acceleration. "After 10 seconds or so into a jump, the wind that was coming at you horizontally from the speed of the plane shifts and then starts to come from below you. The whole rest of the time in the air you feel like you're floating. It's just sensory overload up there—and it's exhilarating."

Moulton's first dive came at age 19, during his sophomore year at the University at Buffalo. He recalls a bunch of friends hanging around in a dorm room when one person suggested skydiving to relieve the boredom. For $35 per person, they went static-line parachuting out of Seneca Falls, New York. As for any trepidation, Moulton says his "developing brain" was young enough that the risk didn't register. "I thought it would be a once-in-a-lifetime thing," he says. But the unexpected flying aspect got him hooked. "I read a lot of Superman comics when I was a kid, and here I was jumping out of a plane with a gaily colored jumpsuit, flying through the air," he says.

He jumped throughout college and during grad school, first at the University of Texas and then at Johns Hopkins—with a stint in the Peace Corps in between. But after graduate school, Moulton stopped skydiving for nearly 25 years. "I got married. Had kids. And my wife didn't want to raise the kids by herself" should anything happen to him, he says. He took up a new hobby, tennis, which he played until his osteoarthritis made it too painful. So, six years ago, at age 58, he started skydiving again. "I realized that in life you should do what you like to do. And even with my arthritis, I could still fall out of airplanes," he says.

Moulton says he realizes the inherent danger involved in skydiving, but he takes pains to minimize any risks through careful pre-flight safety checks of his equipment and weather conditions. In training, you learn how to jump out of the airplane safely and the myriad types of parachute malfunctions that could occur, and how to deal with them in a rapid timeframe. You also learn how to land, softly as possible. Still, he's had some close shaves. One time in California he got "too interested" watching a fellow diver trying to find the handle to open his parachute. "I almost forgot to open mine," he says. "Next thing I know the ground is coming up quick." In a jump over Dubai in 2015, a miniature tornado, or dust devil, appeared out of nowhere and collapsed his parachute less than 200 feet from the ground. He had to act quick. He pulled down on his steering lines repeatedly in an attempt to reflate his parachute, and the action was enough to slow down his fall. "But I still ended up sliding in on my rear end, probably going like 40 mph," he says. "No one could believe that I didn't break a single thing. It's a miracle I wasn't killed."

In the past six years, Moulton has made over 300 jumps, including some with faculty and students from the Bloomberg School, where he is involved in HIV-related research and several randomized trials of vaccines. Each year, Moulton auctions off a skydiving lesson and tandem jump to help fundraise for the Bloomberg School's Student Conference Fund. This spring, Moulton is scheduled to jump in Olympia, Washington, and later this year he's signed up for a school-related research project in Barcelona, and plans to go skydiving off the small coastal community of Empuriabrava, known as the Venice of Spain. And if all goes as planned, this August he plans to break the Canadian record he help set last year. "After last year, everyone got psyched and was like: 'Oh man, we can get even more people! Maybe 20 or even 30. We'll get two planes this time and fly them in formation," he says. "That's our hope. It will be fun."

Why skydive? "It's still absolutely thrilling, and it's fun to engage in the act of flying," he says. "It's also a very efficient way to really clear your mind."

Fear of heights? Yes. "When I go to the top floor of a building, like even the School of Public Health here, I don't like to peer over the railing," he says.

Lucky? "Well, I wouldn't call it just luck. I'm a biostatistician; I can actually evaluate risks."

Favorite piece of skydiving equipment or clothing: An old T-shirt from a skydiving event, or boogies as they're sometimes called.

Music to relax to: 1960s folk. People like Baez and Dylan.

A movie that everybody has seen except you: The Exorcist.

You couldn't pay him to… Bungee jump. "You're not flying, you're falling," he says. "And then you hear about people who get detached retinas, back problems and all sorts of nasty things. No thanks." 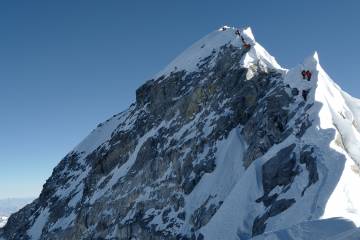